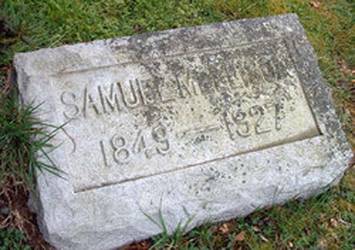 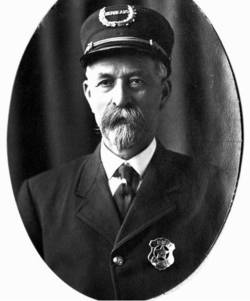 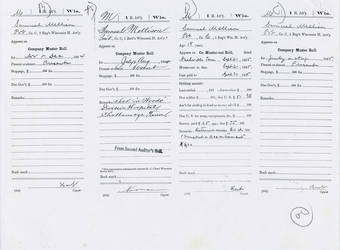 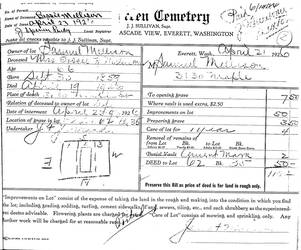 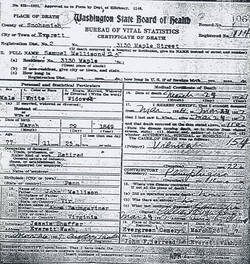 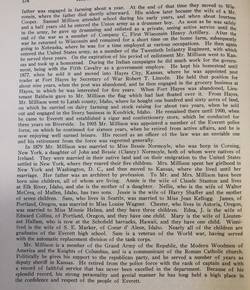 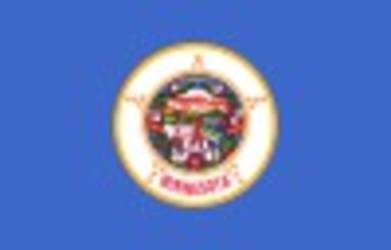 NOTE:  During the American Civil War infantry and cavalry regiments generally served together as a cohesive unit. That was not the case for artillery regiments which seldom, if ever, were assembled at one location. Instead, individual companies called "batteries" (generally composed of six cannons) were assigned on an individual basis wherever a need existed. As such, herein primarily the history of battery "C" alone is being covered.

Battery "C" was mustered into Federal Service on 10/1/63 and left the state on 10/30 for Fort Wood located in Chattanooga, TN.  In January, 1864 it moved to Fort Creighton in that city and then to May to Fort Sherman. On March 29, 1865 it moved to Athens, TN. From there it marched to Mouse Creek. On July 3rd, the war being over, it was ordered to Strawberry Plains. It was mustered out at Nashville on 9/21/65

Ed. Note: The original birth – to – death biographical profile on Samuel Mellison was created in the early days of the Civil War Vets Buried In Washington State project. As such, it suffered from a lack of details that today can be gleaned from records located in the National Archives and on- line sources. What follows is a May, 2018 updating of that original bio. While much improved, it still lacks the detailed substance of more recent biographies.

Samuel Mellison was born 3/29/49 to John/George (b. 1818 PA) and Anna “Annie” M. (nee Baumgarten b. 1821 PA) Mellison. At the time of the 1850 U.S. Census the Mellison’s were residing in or near the community of Prospect located in Butler County, PA. At that time John/George’s occupation was listed as “wagon maker.”

Beyond the fact that in 1854 the Mellisons moved from Pennsylvania to Bad Axe County, Wisconsin, nothing additional is known about Samuel's birth family, childhood or formative years.

In August, 1863 Samuel enlisted in the U.S. Army as a drummer boy. For enlisting he received a $100 bonus or "bounty", $75 of which was paid up front with the balance to come in later increments.  Although military service records report that Private Mellison - the surname was also shown as Millison - was eighteen years of age, in actuality he was fourteen.

From November, 1863 until around April, 1864 Private Mellison was absent from his company. During those months he was reported "sick in Wood's Division Hospital Chattanooga, TN." The nature of his lengthy illness is not known. He then was reported as present for duty until being mustered out of the military on 9/21/65. Interestingly, although reportedly a drummer, Private Mellison also had a rifled musket.  When being mustered out he chose to pay the U.S. Government $6 so he could retain the musket and related accoutrements.

With the War and military service behind him young Samuel moved to Minnesota and then on to the Dakota Territory where he remained until 1871. That year he removed to a farm near Saline River, Kansas. There he engaged in raising stock and farming.  This was where a census count taken in 1875 found him and identified his community of residence as Big Creek located in Elk County.

In 1878, within Kansas, Samuel moved from Big Creek/Saline River to Hays City. At that location he was involved in the restaurant business for two years. He was then appointed post trader/sutler at nearby Fort Hays.

Nine of the ten Mellison children were living as of 1900. It appears the only child to not survive into adulthood was daughter Nellie.

By 1900 the Mellison family had quitted Hays Kansas and moved west to the community of Latah, located in Kendrick County, Idaho. As is often the case, exactly when and why the move was made is not documented. The stay was not a long one

Around 1901 the Mellisons moved from Idaho to Everett, Snohomish County, Washington. Again, what drew the family to the Puget Sound region is not documented. There the 1901 business directory noted that Samuel was either the owner of or was employed in a billiard/pool hall. By 1910, however, he had become a member of the Everett Police Department, a position which he maintained until at least 1920 and, possibly, longer.

Interestingly, prior to moving to Everett and becoming a police officer, Samuel had gained the reputation of being a ”trailblazer", "frontiersman" and "Indian scout." According to family lore he personally knew William "Buffalo Bill" Cody and George Armstrong Custer.

Bessie Mellision died in 1925. Samuel, former Civil War artilleryman died on 3/24/27 five days shy of his 78th birthday. Both Bessie and he are buried in Everett's Evergreen Cemetery.