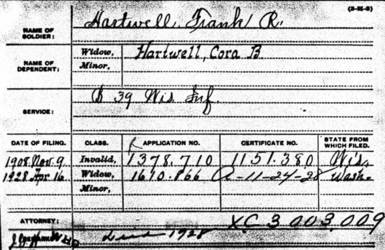 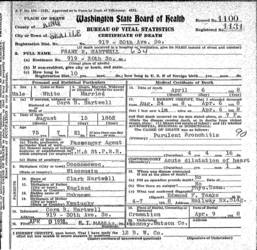 Upon reaching Memphis on 6/17 the regiment was engaged by detachments in train guard and picket duties. While in service at Memphis it had a brush with Confed. Gen. Nathan B. Forrest’s cavalry near Hernando Road. The Rebels, 5000 strong, broke through the Union picket line and entered the city.

Their term enlistment expiring, the 39th returned to Wisconsin. It was mustered out of Federal service and into the history books in September, 1864.

Birth years abound for Francis "Frank" Robert Hartwell. However, according to his Washington State Death Record he was born on 8/15/52 in Oconomowoc County, WI.

Frank's father was Clark Harwell. He was reportedly born in the year 1811. Birth locales for Clark include England, New Hampshire and Massachusetts. In the 1870 U.S. Census for Wisconsin Clark listed his occupation as "druggist."

Very little documentation is presently available pertaining to Frank's mother. Her first name was Isabella. Her birth surname is not known. Isabella was born during 1856 in either Kentucky (she noted this state in the 1870 census), Maryland or Wisconsin.

In terms of siblings we know that Frank had at least one. She was a sister named Ida. Ida was reportedly born in Wisconsin during 1856.

The first post-birth information we have on Frank is his enlistment in the U.S. Army. If his 1852 birth year is to be accepted as correct, he was not even twelve years of age when he enlisted. This seems highly implausible, but, perhaps, he was a drummer boy. Without access to his military service records all we know is that he survived 100 days of enlistment and returned to civilian life.

Military service behind him Frank went back to his parents' Wisconsin home. The U.S. Census for 1870 placed him in that residence in Oconomowoc Waukesha County, WI. In 1870 - like his father - Frank listed his occupation as "druggist."

We jump ahead, now, to 1895. A census for that year found Frank in LaCrosse, LaCrosse County, WI. Still single, no other information is provided on him.

As best as can be determined Frank married in 1900.  His bride was Cora B. Nicholas. Cora was born on 9/28/69 in Wisconsin.  During their years together Frank and Cora produced no children.

It is believed Frank and Cora resided in LaCrosse, LaCross County, WI through 1917. During those years Frank was employed as a passenger ticket salesman for the Chicago, Milwaukee and St. Paul (The Milwaukee Road) Railroad.

Also during the LaCrosse  years, on 11/9/08 Frank applied for and was granted a U.S. Government disability pension based on his days of Civil War soldiering. Without accessing his pension files no details are available pertaining to his monthly financial stipend.

In 1918 Frank and Cora removed from Wisconsin to Seattle King County, WA. What had drawn the couple to the Puget Sound region of the Pacific Northwest is not known. Perhaps, though, it was availability of a ticket agent job or some other position in one of the Milwaukee Road's Seattle area stations or offices. Unfortunately, the 1920 U.S. Census for Seattle did not note an occupation for Frank.

Francis Robert Hartwell died on 4/6/28 at his 919 30th Ave South Seattle home. Cause of the 75 year old's passing was Purulent Bronchitis - from which he had suffered since April, 1924 - and acute dilation of the heart. His cremated remains were/are interred at the Acacia Memorial Park north of Seattle in unincorporated - now the city of Lake Forest Park - King County.

After Frank's passing Cora remained in Seattle. She died there on 6/26/47. No details are available pertaining to her passing. Her remains were/are interred at Acacia with Frank’s.