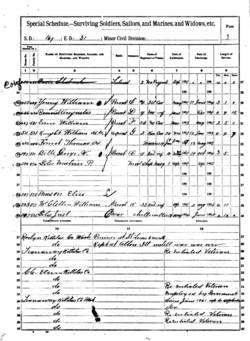 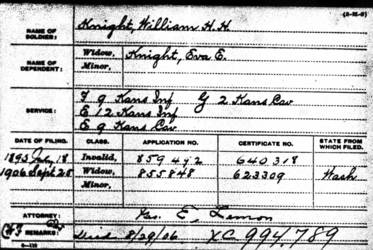 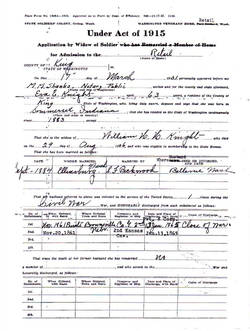 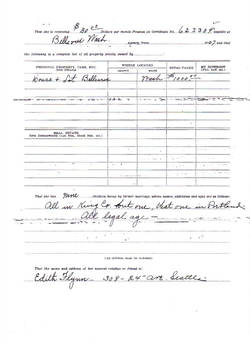 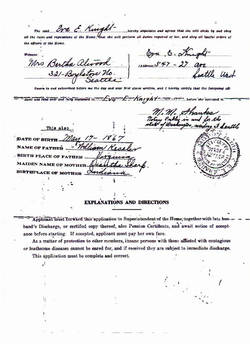 The 9th Kansas, a state militia infantry regiment was called into service on 10/9/64 when Confederate forces lead by Major General Sterling Price began a raid into Missouri. As best as can be determined, the unit had no contact with the enemy and was disbanded a few short weeks later when the Rebel threat had ended.

Although William Knight's U.S. Government pension card credits his connection with this organization, what that affiliation might have been is an unknown. No personnel roster for the 9th has been located. Further, during 1864 when the 9th Kansas State Militia Infantry was activated William was, supposedly, already serving with a Federal Kansas unit. Military service records will be needed to clarify the matter of Mr. Knight's affiliation with the state 9th.

REGIMENTALLOSSES:
No regimental loss statistics have been located for this organization.

The 12th Kansas, a state militia infantry regiment was called into service on 10/9/64 when Confederate forces under the command of Major General Sterling Price began a raid into Missouri for the purpose of disrupting President Abraham Lincoln's reelection. During the weeks following call up, the 12th saw action 10/22/64 at Byram's Ford on the Blue (Big Blue) River near Kansas City, MO. This skirmish preceded the battle of Westport which was fought on 10/23/64.

The battle of Westport (now a part of Kansas City, MO) was one of the largest battles fought west of the Mississippi River and ended the last major Confederate offensive west of the Mississippi. It is sometimes referred to as the "Gettysburg Of The West." The confrontation involving approximately thirty thousand troops was/is considered a Union victory. The battle ended the Rebel threat to Missouri and left the state under Union control during the remainder of The War. The 12th militia was disbanded shortly after the fighting ended.

Although William Knight's U.S. Government pension card credits his connection with this organization, what that affiliation might have been is an unknown. No personnel roster for the 12th has been located. Further, during 1864 when the 12th Kansas State Militia Infantry was active William was, already serving with a Federal Kansas unit. Military service records will be needed to clarify the matter of Mr. Knight's affiliation with the state 12th.

The organization of this three year western theater cavalry regiment was completed in the early months of 1862 by consolidating independent battalions, squadrons and detachments originally intended for other units. Initially designated the 9th Kansas Cavalry, much of the regiment subsequently became the 2nd Kansas Cavalry.

Soon after its late March, 1862 Federal muster the 9th was sent to various points from the Missouri River to the Rocky Mountains.

During nearly its entire period of service the 9th was employed in the irregular and hazardous warfare that took place along the Missouri/Kansas border. While performing these duties the regiment was seldom united as a single organization.

The first organizational steps to create what was to become a three year western theater cavalry regiment were taken in October, 1861. The new unit was to be called the 12th Kansas Volunteer Cavalry, but that December its designation was changed to the 9th.

March, 1862 saw the regimental number again changed when it became the 2nd Kansas Volunteers. This caused confusion because many of the men who were previously in the old 2nd were now in the new 2nd. Finally at the end of March, 1862 the designation of the regiment was changed to the 2th Kansas Cavalry.

After Federal muster a detail of 150 of the regiment's men were detailed to duty on a battery of six pound parrot guns. Most later returned to the 2nd, but many did not. This loss was later determined to have been disastrous.

Spread out from Kansas to Colorado, throughout its existence all or part of the regiment fought in numerous battles and skirmishes with both Native American hostiles and Johnny Reb. Many of the engagements are well known. Many are not. All told, the 2nd cavalry saw as much hard service and did as much fighting as any other cavalry organization west of the Mississippi.

William Herbert Henry Knight was born 3/8/41. The place of his birth was Harrison County in the state of Ohio.

As denoted by the birth states of the Knight children at some point in time between the birth of George (1842) and Margaret (1846) James moved his family from Ohio to Missouri. Then, between 1846 and the birth of Melissa (1848) the Knights moved from Missouri to Nebraska Territory. Why the moves? Probably the lure of new farming land.

Prior to the American Civil War information pertaining to William is virtually non-existent. That having been said, wartime information is - at best - minimal. It appears he joined the 2nd Kansas Cavalry on 11/20/61 and served with that organization until 1/13/1865.

Without William's military service records it is almost impossible to unravel how his Civil War service played out. The most that can be said at this time is that on 12/9/62 he was promoted from the rank of private to corporal, a rank which he maintained throughout the remainder of his enlistment. Also, at discharge the government owed him for the use of his own horse and equipment from 12/31/63 to 6/20/64. Finally, he survived the wartime experience and returned to civilian life.

Post-Civil War William disappears for nineteen years. He re-emerges in September, 1884 in Ellensburg, Kittitas County, WT. That was when and where he wed to Eva Ethelkene Kessler (b. 5/17/67 Sommerset, IN). Eva had been in Washington since 1883. How and when William arrived in the Pacific Northwest and the two crossed paths are unknowns. After marriage William and Eva took up farming in in the Teanaway or Swauk/Swaukane Canyon region outside of Cle Elm in Kitittas County.

Speaking of the twentieth century, in 1900 William and family were in the Swauk region of Kittitas County. A decade later, however, they had quitted the eastern part of The Evergreen State and established a farm in the Wilburton area of King County east of Seattle across Lake Washington. Wilburton is now a region of south Bellevue along the Interstate 405 corridor and north of Interstate 90.

William H.H. Knight died in Bellevue King County, WA on 8/26/06. Details of the sixty five year old’s passing are not available. He was/is buried in the masonic-affiliated Acacia Memorial Park located north of Seattle in then-unincorporated King County. ** The cemetery grounds are now within the city of Lake Forest Park.

On 7/18/93  while still in eastern Washington state William began the paper chase to obtain a U.S. Government disability pension based on ailments or other physical handicaps that traced back to his days of Civil War soldiering. The pension was granted, but without access to pension files the details of the stipend remain an unknown.

Almost immediately following her husband's death, on 9/25/06, Eva petitioned the government to continue receiving at least a portion of Williams' pension payments. She was successful in the attempt and the pension continued. Again, however, details of her original monthly grant is unknown. More on this shortly.

In 1910 and 1920 Eva still resided in her Wilburton home. By 1930, however, she had moved to Seattle and was residing on her own. Her Seattle address appears to have been 547 27th Avenue.

According to available papers the Home application was made because Eva could no longer live by herself in her "little home." Further, her adult children had families of their own and did not want to assist with her care.

During the Home application process we learn that Eva was receiving thirty dollars per month via her widow's disability pension. Further, she still maintained ownership of the Wilburton house and lot (value $1000). By renting the property she occasionally received monies to aid in her support.

* William Knight's name does not appear on the American Civil War Research Database roster for this regiment. His name does, however, appear in conjunction with that organization on his U.S. Government pension card. The name omission was likely due to the 9th-for the most part - becoming the 2nd Kansas Cavalry.

** Henry Saunders who served in Co. “E” of the 9th KS Cavalry is also buried at Acacia