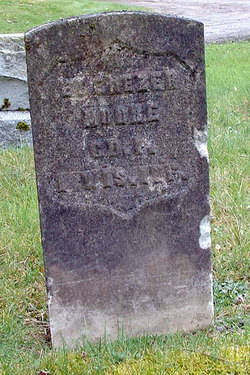 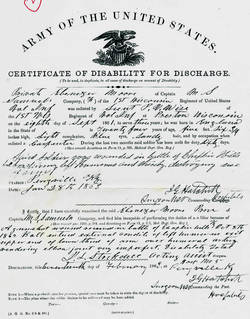 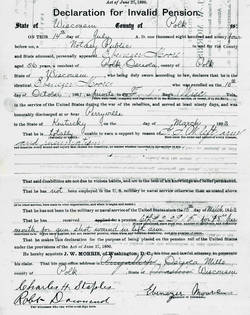 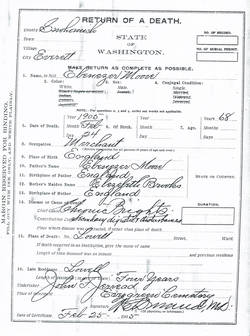 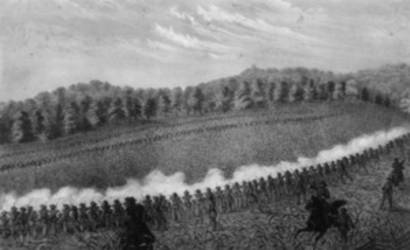 The 1st was initially put into the field as a three month regiment. This incarnation left Wisconsin on 6/9/61. It subsequently led the advance on Martinsburg, VA and participated in the early Civil War battle at Falling Waters, VA along the Potomac River before being mustered out of service.   Regimental losses: 91 by death desertion transfer and discharge.

Six weeks after the three month 1st was mustered out, a new, three year incarnation of the 1st came into existence. During its tenure in the "western theatre" the 1st participated in the battles of Perryville or Chapin/Chaplin Hill, KY, as well as Stone's River, TN Chickamauga, GA and Missionary Ridge, TN

In September, 1861 Ebenezer Jr., (hereafter referred to as Ebenezer) a 5' 6 3/4" blue eyed, fair haired, light complexioned carpenter enlisted in the army of his adopted country. Perhaps one reason for doing so was the lure of U.S. citizenship because, Ebenezer did, in fact, later becomes a naturalized United States citizen.

On 10/8/62 during the battle of Chapin/Chaplin Hill near Perryville, KY Private Moore suffered a debilitating wound to his left arm. A musket ball entered the lower area of the appendage and exited in the upper, rendering the elbow joint useless in the process. After treatment in a hospital at or near Perryville, Ebenezer was granted a total disability medical discharge.

After leaving the military Ebenezer returned to his parents' Wisconsin farm. Exactly where that farm was located at the time is not known, but by 1870 the family was residing in the Polk County community of Farmington.

While Ebenezer apparently remained in Wisconsin for two decades,  a crossed out address on a 1894 pension document points to the likelihood  he may have moved westward during this period spending some time in Puyallup, WA before returning to Farmington. When or why these moves occurred, if in fact they did, is not known.

In 1901 Ebenezer settled in the Puget Sound area of Washington State.  His community of choice was Lowell, on the outskirts of the City of Everett in Snohomish County. .

Bachelor and former Civil War soldier Ebenezer Moore died in Lowell on 2/24/05. Cause of death was listed as chronic Bright's disease of the kidneys with secondary digestive problems contributing.  Employed as a “merchant”, Ebenezer was approximately 67/68 years of age at passing.

Circa 1894 Ebenezer  had applied for and, at some point, was granted a U.S. Government disability pension based on ailments/injuries tracing back to his days of Civil War soldiering.  When the pension was granted and for what amount is not known, but at death he was receiving a $12 per month stipend.  Ebenezer was buried in Everett’s Evergreen Cemetery.