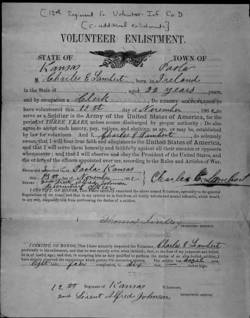 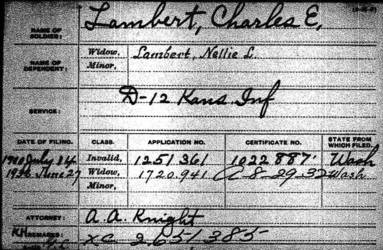 The 12th was a three year western theater infantry regiment. It was recruited in the late summer of 1862 from the Kansas counties of Wyandotte, Johnson, Douglas, Miami, Franklin, Coffey, Allen, Linn and Bourbon. Throughout its first year of service it was stationed, by detachments, along the Missouri/Kansas border.

In October, 1863 one detachment of the 12th was engaged with the enemy at Baxter Springs, KS. Later that same month another detachment escorted a supply train from Ft. Gibson, OK to Ft. Smith AR. Late in the year the regiment was concentrated at Ft. Scott, KS and from there,  in fifteen days, marched a distance of 215 miles to Ft. Smith.

March, 1864 saw the regiment participate in the Camden Expedition. During that movement the Rebels were engaged at Prairie d' Arne, AR. On the return march the enemy was again engaged at Jenkins' Ferry. A movement to Little Rock, AR followed.

Not long after reaching Little Rock the 12th undertook a forced march to Ft. Smith. This ordeal involved trekking five hundred fifty miles over the worst possible roads, most of the time on half rations and part of the time entirely destitute of provisions for man and beast.

Fatigue and escort duties at Ft. Smith consumed the winter of 1864/'65. On 2/24 of the latter year the regiment embarked for Little Rock, AR. There it was employed in fatigue and guard duty until mustered out on 6/30/65.

Charles Edward Lambert was born on 10/1/42. The location of his birth was the country of Ireland.

Parents of Charles were John Lambert (no b.d. - d.o.d) and Jane (nee Payton no b.d. - d.o.d.) Lambert. It is not known if John and Jane produced children other than Charles.

Charles came to America in 1861. Where he may have initially lived is not known, but when he enlisted in the U.S. Army on 5/4/63 he was residing in Baldwin City Douglas County, KS.

From Private Lambert's enlistment papers we gain a glimpse of Charles Lambert the physical being. He was six feet tall, had a light complexion, light hair and hazel eyes. He listed his occupation as "clerk."

Without accessing Private Lambert's military service records not much can be said about his period enlistment. He did, however, survive The War and return to civilian life.

After Charles exited the army we do not know where he settled. Also, no U.S. census data has been located regarding his residential status in 1870.

During their years together Charles and Nellie produced seven children. All were reportedly living in 1900.

As denoted by the birth states of the Lambert children, after their marriage Charles and Nellie wasted little time moving west. In 1877 they were in Indiana, but by 1880 had quitted that state and removed to East Salem Marion County, OR. As a child, Charles had some basic education, because when he enlisted in the army he was a clerk and in Salem he was employed as a teacher.

1900. The dawn of a new century, a new decade and a new U.S. Census. At the time of that tally the Lamberts were in Tacoma Pierce County, WA. What had drawn the family to the Puget Sound region of the Pacific Northwest and exactly when they arrived here are unknowns, but they were in-state as of 7/14/00 because  that was the date when  was when former Private Lambert was granted a U.S. Government disability pension based on his days of Civil War soldiering. More on this, later.  Charles' occupation at the beginning of the twelfth century was denoted as "minister."

A decade later, in 1910, the Lamberts were still in Tacoma. Charles was evidently retired by that time because he did not give census takers an occupation. Remaining under he and Nellie's roof were their five youngest children.

After the 1910 census relationships within the Lambert household become murky. On 2/26/16 Charles was admitted into residence in the Washington Old Soldiers' Home located in Orting Pierce County, WA.

The reason for his admittance is not known because his admission paperwork is missing.  On 11/23/17 when going out on a furlough Charles asked for his packet of papers. He then "mistakenly" took the documents with him and did not return them to Home staff when later requested to do so.

By 5/15/18 Charles, at his own request, had been discharged from the Orting Home. His new address was 2124 6th Ave. Seattle, W. A letter from the facility superintendent to Charles at that time somewhat bitingly read: "We are enclosing your discharge from this Home and hope you may find some Home elsewhere suited to your taste where you can enjoy an ideal existence and have everything to your liking."


Where was Nellie during this period? We do not know!!

Interestingly the 1920 U.S. Census showed Charles to be back residing in the Orting Solders' Home. When he had returned there is not known.

In that ‘20 census tally Charles noted that he was married, but there was no sign of Nellie. Had the couple seperated? Di Again, don't know.

1930. Another census. Charles remained in Orting, but claimed he was a widower. That was strange because - as we shall see - Nellie was still alive.

Charles Lambert died on 5/28/32. At his passing he was living, not in the Orting soldiers' home, but in the state's other facility for old soldiers located in the Kitsap County community of Retsil. At death his occupation was noted as "retired university professor." Pension files may have to be obtained to shed light on this aspect of Charles' employment career.

The cause of Charles' death was noted as catarrh (infection) and jaundice. He had contracted the conditions earlier that same month. Contributing was "exhaustion.”  At the age of 89 years, 7 months and 24 days the old soldier's body had worn out.

Charles' earthly remains were interred in the Acacia Memorial Park located north of Seattle in unincorporated - now part of the City of Lake Forest Park - King County. Why there? We don’t know.

Based on what was written in Charles' Washington State Death Certificate, at the time of his passing he and Nellie were still married.  On 6/27/32, shortly after her husband’s death Nellie petitioned the U.S. Government to continue receiving at least a portion of Charles' pension. The request was granted, but without access to Nellie's widow pension files details of her stipend are not known.

In 1940 Nellie was residing in Seattle King County, WA. She was eighty seven years of age. Under her roof was her sixty year old unmarried daughter, Edith.

Nellie died in Seattle on 6/24/42. She, too, was buried in the Acacia Memorial Park.