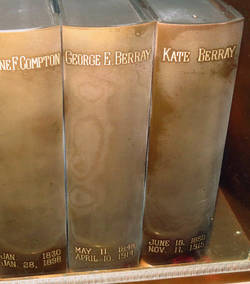 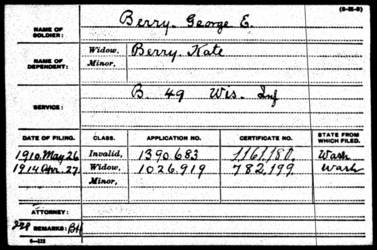 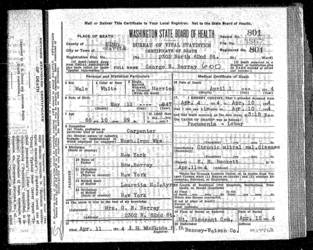 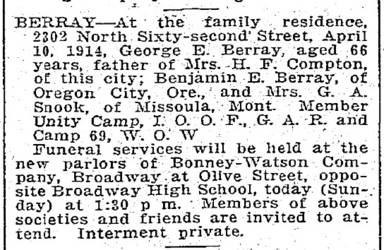 The 49th was a one year infantry regiment. It was organized and mustered into Federal service during the waning months of the American Civil War. It served its entire period of existence in Missouri.

Departing Wisconsin on 3/8/65 the 49th moved to Benton Barracks near St. Louis, MO. It's headquarters were then established at Rolla. From there companies were spread throughout the state performing guard and garrison duties. During this period Company "B" was sent ten miles east of St. James.


NOTE: The birth - to - death biographical profile of George E. Berray was created in January, 2021 during the Covid-19 medical pandemic. It contains less depth of detail than many other biographies within this website because military service, pension and other veteran-related files housed in Washington, D.C.'s National Archives were not available. At a later time those documents may be obtained and the data contained therein added to the narrative which follows.

According to one source George Ellsworth Berry was born on 5/11/48. However, his Washington State death certificate indicates he was birthed in 1847. Herein we are adopting 1847.  His place of birth was Franklin Delaware County, NY.

George’s father was Edward Berray (no b. d. NY). His mother was Lauretta (nee McIntyre no b. d. NY) Berray. As of this writing no information has been found regarding possible siblings.

In the ebbing months of the American Civil War George enlisted in the U.S. Army. His infantry regiment, the 49th Wisconsin was never exposed to combat.

Prior to the U.S. Census for 1870 being tallied George married. His bride was Catherine "Kate" L. Lefevre (b. 6/18/50 Winnebago, WI. When the census was taken that same year George and Kate were living with her parents on a farm located in Rushford Winnebago County, WI. George was employed by his father - in - law as a laborer.

As noted by the birth locations of the Berray children, sometime after the 1870 census and before the birth of Mabel/Mable in 1871 George and Kate removed from Wisconsin to Iowa. They would remain in Sheldon, Iowa until at least some time after the 1880 U.S. Census. While in Iowa George listed his occupation as "brick mason."

By 1892 brick layer George and family - Kate, Annie and Ben - were residing in Ward 2 Seattle King County, WA. What had drawn them to the Puget Sound region of the Pacific Northwest is not known. Also an unknown is exactly where they arrived here although by 1891 George was a member of Seattle's Isaac Stevens Post #1 Grand Army Of The Republic (G.A.R.).

While living out their years in Seattle the Berrays appear to have resided in several locations. Also, George held a number of jobs. As noted, in 1892 they were in that city's Ward 2 (occupation "brick mason"). In 1900 they were in Ward 6 (occupation "miner of ores") while in 1910 they were in Ward 11 (no occupation listing). At the time of his 1914 death George was apparently employed as a carpenter with Seattle's Washington Iron Works.

Although George's death certificate indicates he was buried in Seattle's Mt. Pleasant Cemetery on 4/12/14, his final resting place was/is Acacia Memorial Park. Then located north of Seattle in unincorporated King County Acacia, today, is in the City of Lake Forest Park.

Catherine "Kate" Lefevre Berray died on 11/11/15. She was/is buried beside George at Acacia.

From Find A Grave

George and Kate were apparently buried in Mt Pleasant, but further research indicates that they are currently in Acacia Cemetery. From what I can confirm the Compton family had them moved to be near the Compton's