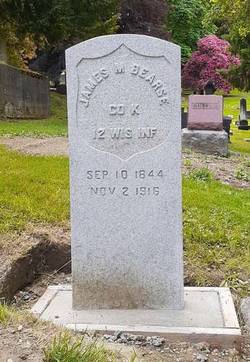 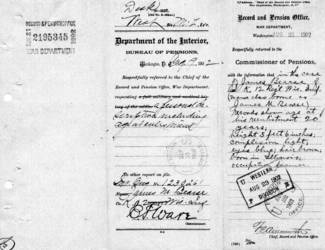 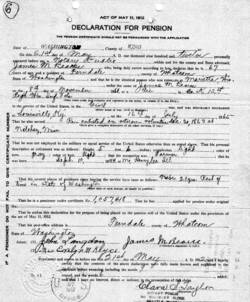 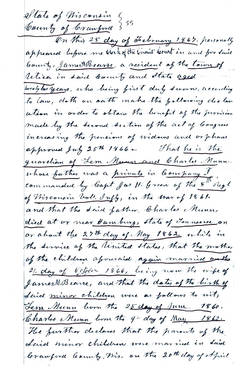 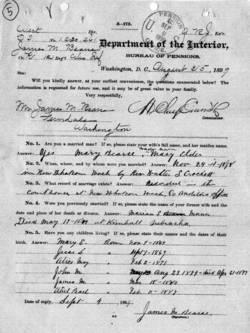 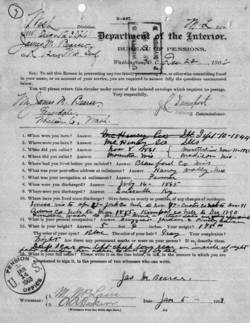 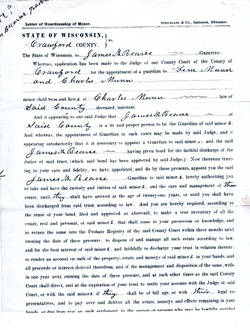 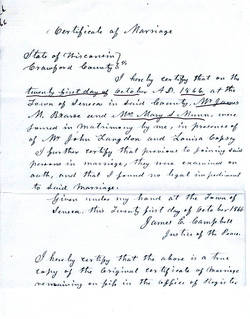 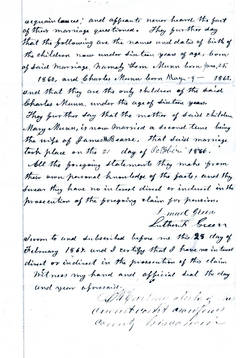 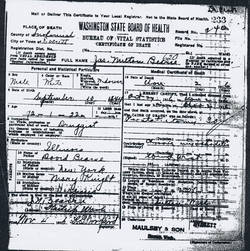 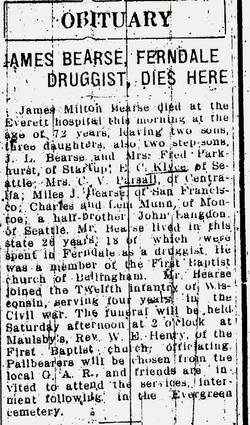 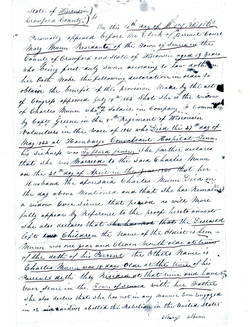 The 12th, a three-year "western theater" regiment known informally as the "Marching Twelfth" departed Wisconsin on 1/11/62.  As one of the regiments selected for a Union campaign into New Mexico, the unit covered a lot of miles on foot before the expedition was abandoned. It was then sent into Kentucky to repair railroads and rebuild bridges around Columbus. From there the 12th moved into Tennessee where it helped clear the region around Humboldt of guerillas and bridge-burners. 1862 ended with the unit skirmishing in Mississippi.

In the spring of 1863 the 12th was with the forces of Union Gen. U.S. Grant moving toward placing Vicksburg, MS under what was to be a 47 day siege. During these movements it participated in the battles of Jackson and Big Shanty. Vicksburg surrendered on 7/4/63.

1864 found the 12th on the march once again, this time with Union Gen. W.T. Sherman's armies on the way to Atlanta, GA. Combat actions during this trek included Kennesaw Mountain, Bolton, at Jonesboro, Lovejoy's Station and two engagements before Atlanta itself. Next came the famous "march to the sea" which resulted in the surrender of Savannah, GA without a fight.

With the dawning of 1865 Sherman's forces moved northward from Georgia through the Carolinas. During the Carolinas campaign the 12th fought at Pocotalio, tore up railroads, drove enemy from Orangeburg and assisted in the capture of Columbia and Winnsboro.  With North and South Carolina behind them, the 12th continued northward through the Virginia cities of Petersburg, Richmond, Fredericksburg and Alexandria. In May it marched again, this time though the streets of Washington City during the Grand Review of Union forces. Final muster came in July.

James Milton Bearse was born 9/10/44 in Chemung, McHenry Co., IL to David (b. NY) and Mary (nee Knight b. 1818 NH) Bearse. It appears the elder James died sometime between 1844 and 1849.  Mary then remarried.  Beyond this parental information nothing is known about the make-up of young James’ birth family. Also, no information is available pertaining to his childhood or formative years.

In late 1861 teen-aged farmer James heeded the patriotic call to duty and enlisted in the U.S. Army. As he was well under the 18 year age limit to enlist on his own, it is not clear who, if anyone authorized the enlistment. While the physical demands of 1860s military service often proved to be more than young combatants could physically endure, James' subsequent three years of service were apparently benign. There is no available evidence he suffered serious illness or wounding. Further, when his initial three year enlistment expired, he re-enlisted as a veteran volunteer and, again, successfully served without being harmed until the end of The Rebellion.

Army life behind him, 20 year old James returned to farm life in Wisconsin. It was there on 10/21/66 in Seneca, Crawford County, he wed the previously married Marian/Mary Sophia (nee Green b. 1842 or ‘46 IL,) Munn. The widow Munn had been married to Charles Munn, a Civil War soldier (private Co. “F” 8th Wisconsin Infantry) who had died of disease on 5/27/62 in an area of Tennessee known as Hamburg.  (Note: 2 so-named unincorporated regions in two different Tennessee counties exist today. Ed) According to one database, both Munn and Bearse resided in Seneca Wisconsin at the time of enlistment. As such, they may have known one another.  Although family lore has it that Munn died in Bearse’s arms, the fact that the two were in different armies and regiments at the time of Munn’s death makes such an occurrence unlikely.  Further, available documentation presents no written evidence of this death incident.  With the marriage James became stepfather to widow Munn's two young sons; Lemuel (b. 1860) and Charles, Jr. (b. 1862). He then took steps to assume legal guardianship of the two boys.

According to one source, in April, 1867 the Bearse/Munn clan left Wisconsin to settle in York Co., Nebraska.  It was apparently there on 11/1/68 the Bearse' first child, Mary Evelyn was born.

For the most part the 1890 U.S. Census was destroyed by fire, so Bearse family information is not available. Apparently, however, in December, '90 James and family moved to Ferndale in northwestern Washington State. Why the long distance resettled was made is not known.

Circa 11/24/98  in New Whatcom , present day Ferndale,  Whatcom Co., WA 54.2 year old James again wed, this time to Mary Ann Elder (b. 12/13/28 MD or IN), a woman approximately 16 years his senior. Amongst other things, likely he was seeking a mother for daughter Ethel P. who was then only eleven years.  That same year the former Civil War veteran and farmer became a druggist.

In 1902 the Ferndale druggist physically described himself as follows: 5'6" tall, weighing 175 lbs., light complexioned with blue eyes and gray hair. He had a deep scar on his left cheek as well as a long scar on the inside of his right foot which extended from the ankle to one half of the big toe. Interests were gardening and raising poultry.

By 1916 James' address was Sultan/Startup, WA, in eastern Snohomish County. He was then living with son Jessie/Jesse.

Old Civil War soldier James Milton Bearse died 11/2/16 in Everett General Hospital located west of Sultan/Startup in the Snohomish County City of Everett, Washington. Cause of death was listed as prostatectomy (prostate disease) along with chronic myocarditis (heart trouble).  At death the 72.1 year old was receiving a U.S. Government disability stipend of $25 per month which stemmed from his youthful years of Civil War service.  He was noted as survived by two sons, three daughters and two stepsons. Those survivors were: Jesse L Bearse and Mrs. Fred (Ethel) Parkhurst of Startup. Mrs. Mary Klyce of Seattle, Mrs. George (Alice) Marshall of Centralia. Miles J. (John Miles ) of San Francisco, Charles and Lem Munn of Monroe, and a half brother John Langdon of Seattle. Internment was in Everett’s Evergreen Cemetery.