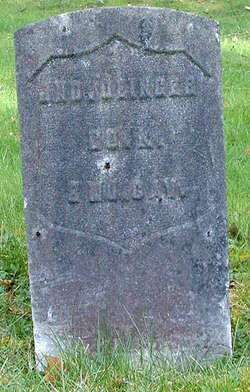 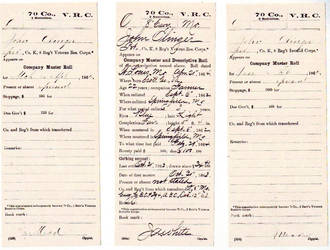 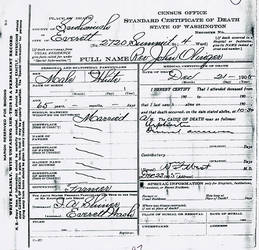 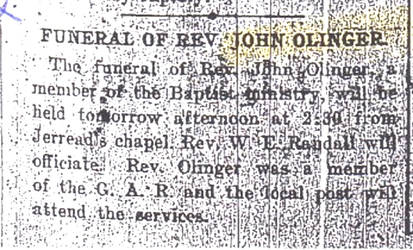 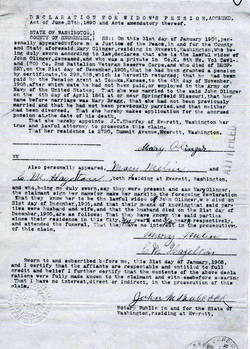 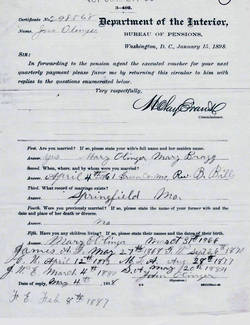 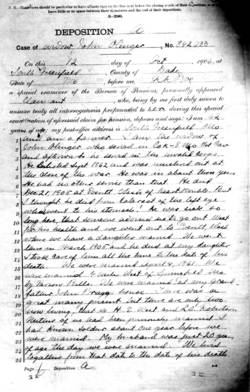 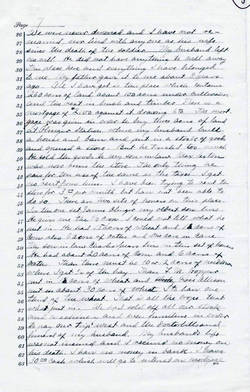 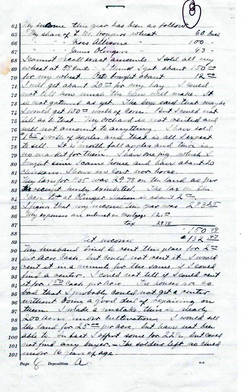 During the American Civil War the north/south border state of Missouri was literally torn apart in terms of brother against brother and neighbor against neighbor conflict. In the early days of The Rebellion both northern and southern sympathizers formed militia units to either capture or prevent the capture of the state's infrastructure. Some, however, were involved in active combat.

Those formulated by those with northern leanings were known as Enrolled Emergency Militia or E.M.M. regiments. Those favoring the south were known as Missouri State Guard or MSG units.

Whether blue or gray, at times such militia units were little more than gangs of thugs who preyed on whomever they pleased. Others were disciplined and conducted themselves in a military manner. Likely in all instances the units were un-uniformed and armed with a variety of weapons. While some state regiments, particularly on the Union side, remained in existence throughout the War, most were assimilated into Federal service or disbanded as individual members joined the Federal army or as Union forces moved into the war torn state.

All that is known about the 72nd E.M.M. is that it did duty in the 4th military district of Southwest Missouri. It was involved in Federal operations against Confed. Gen. Marmaduke's forces from 12/31/62 to 1/23/63 when they moved upon the state capital at Springfield.

The 8th Missouri Cavalry, a three year "western theater" regiment was raised under President Abraham Lincoln's July, l862 call for 300,000 volunteers. It was composed of "the loyal and hardy men" of southwest Missouri and "was one of the best regiments in the entire Union army so far as bravery and endurance were concerned."

From the time of Federal muster until the summer of l863 the 8th was on duty in the locality where it was recruited. It was then attached to Union Gen. Davidson's cavalry division for the Little Rock, AR campaign.

About that time the adjutant-general said of the regiment in one of his reports, "A better and more united regiment does not exist in the volunteer service of the state. The national and state authorities may rely upon it whenever and wherever occasion may require."

On 4/28/63 an order from the U.S. War Dept. created a military entity designed to make suitable use in military or semi-military capacities those soldiers rendered unfit for active field service on account of wounds or disease contracted in the line of duty, but still fit for garrison or other light duty, and were, in the opinion of their commanding officers, meritorious and deserving. As the war dragged on it was proved that additions to what was initially dubbed the "Invalid Corps" or IC were hardly equaled by losses from discharge or otherwise, so it was finally decided that men who had had two years of honorable service in the Union army or Marine Corps could enlist in the Corps without regard to disability. Also, in March, 1864 the name of the organization was changed to the "more acceptable" Veterans Reserve Corps or VRC.

During its existence over 600,000 men served in the IC/VRC. They were divided into two classes: Class l, partially disabled soldiers whose periods of service had not yet expired, and who were transferred directly to the Corps to complete their enlistment terms. Class 2, Soldiers who had been discharged from the service on account of wounds, disease or other disabilities, who were yet able to perform light military duty and desired to do so.

There were 24 regiments in the IC/VRC. In the beginning each regiment was made up of six companies of the First Battalion and four of the Second. In the latter part of the war, however, this method of organization was not strictly adhered to. Each battalion was then composed of soldiers whose assignment was based on their physical condition. The 1st Battalion was composed of men who could still use a musket and therefore could be assigned provost (military police) and guard duty on railroads and in prisoner-of-war camps. Those in the 2nd were primarily used as cooks, orderlies, nurses or guards in hospitals and other public buildings. A third battalion was authorized, but apparently never organized.

While the IC/VRC was to be utilized in non combat roles, such did not always prove to be the case. For example a number of IC/VRC units helped quell the New York City draft riots in July, l863 and others skirmished with Rebel forces at Fort Stevens during Confed. Gen. Jubal Early's movement upon Washington City on July 11-12, l864.

With the ending of the Civil War the need for reserve troops waned. As such, the last VRC unit was mustered out of Federal Service in October, 1866.  During its existence 27 IC/VRC men had been killed or mortally wounded while l, 645 had died from disease or other causes.

Besides the family of Jacob, Jr., the 1850 U.S. Census for the western district of Scott county also noted a Harvey Olinger (b. ca. 1822) living "next door" to Jacob, Sr. and Elizabeth. Whether or not this was another of their children is not known.

John's whereabouts are not known during the time of the 1860 U.S. Census. Likely, however, he had departed Virginia and moved southward into Missouri for it was there around the spring of 1861 he reportedly met Mary Bragg (b.11/44 or '45). The two were married 4/4/61 at her grandmother's home located "four miles west of Springfield.”

Despite having been born in Virginia (his younger brother Alexander Jackson served in the co. "E" 21st Virginia Infantry C.S.A.) and living in the fractured north/south border state of Missouri, on 8/16/62 John offered his services to the U.S. by enlisting in the 72nd Enrolled Missouri Militia. His time with this state unit was short-lived, however, as twenty days later farmer John Olinger, 5'4" tall, with blue eyes, light hair and a fair complexion, departed the militia to join the 8th regiment of Missouri Cavalry (U.S. Federal).

During his service with the 8th, Private Olinger was stationed at Springfield, MO, Prairie Grove, Arkansas, Camp Finley and Lake Spring, MO. Company rosters noted him as always present until 6/29/63 when he was admitted to the U.S.A. General Hospital at Ironton, near Pilot Knob, MO with what was diagnosed as "chronic conjunctivitis," or "pink eye," a highly contagious affliction. After hospitalization, furlough and a return to duty, the condition resulted in Private Olinger being permanently transferred to the "Invalid" or "Veterans Reserve Corps for the remainder of his military service. In 1880 John would apply for and be granted a U.S. Government disability pension based on his inability to perform manual labor, especially during summer months, because of continuing  troubles with his eye which he traced back to his period of military service. At some point a pension was granted, but file documentation does not specify the starting date or dollar amounts for the monthly stipend.

Based on available census data, John and Mary continued to farm and raise their family in Green County, MO until around 1898 when they departed that area for South Greenfield Dade County, MO in order to work a 260 acre farm given them by Mary's father. Also around this time John mortgaged the farm for $200 which he used to purchase three additional acres of land at nearby Olinger Station where John built a house, barn and opened a store.

Based on an affidavit later made by Mary, John was not a well man during their stay in South Greenfield, so in March, 1905, at the behest of others to move west for his health, the Olingers sold their farm stock, farm machinery and some of their furniture in order to bankroll a trip to Washington State. Likely at the same time operation of the store was turned over to a son-in-law.

Arriving in Washington, John and Mary settled in the Puget Sound Area City of Everett where they moved into the home of one of their married daughters. John's health, however, continued to deteriorate necessitating Mary to provide him with continual care.

On 12/21/05 John, aged 65 died at his daughter's home located at 2720 Summit in Everett.  Interestingly, a brief obituary printed the following day in The Everett Herald newspaper indicated John to have been a reverend in the Baptist Church. Pension file documentation, however, makes no reference to John religious activities. Burial was in Everett's Evergreen Cemetery.

Following her husband's death Mary remained in Everett for a time. It was there at the end of January, 1906 she appointed local attorney J.T. Sherfey - also a Civil War veteran later buried in Evergreen Cemetery - to try and obtain for her at least a portion of John's pension.

In October, 1906 Mary returned to South Greenfield, MO, at least for a time, to try and dispose of their farm and store. At that time she stated that she thought John had died of a cataract of the left eye which "went to his stomach." In actuality, she said, he had passed away because of heart trouble. As for her property, she noted that the two houses on her land were "in bad shape", and therefore probably not rentable. She would, however, rent the property in a minute for $1.50 per acre. She would even sell the land for $25 per acre. As for the store, her late husband had been too trusting with his sons-in-law who never paid for anything connected with the business except some of the taxes. Apparently by this time the store was closed and she had not been able to rent it out.  In all, the trip west, doctor bills and John's funeral expenses had financially decimated her. She had no money in the bank........

The next documentation pertaining to Mary comes from the 1910 census. At that time she was back in Everett, WA where she was employed as a housekeeper for two gentlemen. A decade later Mary was back in Missouri living in the Lawrence County community of Lincoln. That census noted she had no income. The only other individual in the household was a fifteen year old Missouri-born girl named Berth Stanley. She was listed as being a servant.

On 5/4/20 Mary wed for a second time. All that is known about her second husband is that his name was J.C. Berry; he had been born in Missouri and was likely a Union Civil War veteran as he was a pensioner.  Mr. Berry died in April, 1922.

The last documented information on Mary comes from 5/8/22. At that time she was a resident of Pennsboro, MO and was inquiring why she had not received a pension check the first of the month based on Mr. Berry's pension status. She needed money........No additional information pertaining to Mary, her pension payments or her ultimate ending is available.