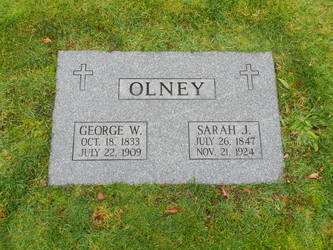 Bio: George W. Olney first married Hannah E. Proffitt in 1857. They had nine children: Frank P, Nellie, Roxa M., John D., Ida, Carrie, George W., Warren M., Myrtle. Hannah died in 1890. George married second Sarah J. Newcomb in 1891. During the family's early years, they lived in Illinois and according to letters George wrote to his brother Darwin, wife visited him while George was serving during the Civil War in Tennessee. By 1866, the family is in Minnesota where they remain for about 20 years. Hannah died in Minnesota in 1890. Then George is found in Washington by 1900, where he died.