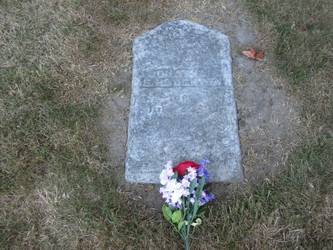 He was bon in Anson Maine and attended medical school, class of 1859. In August 1861 he was appointed assistant surgeon to the 8th Regular Maine Volunteers.
In 1869 he moved to San Francisco for one year before moving to Washington Territory. Jonathan returned east in 1871 for his family and they first settled in Port Gamble WA. From 1878 to 1883 they lived in Goldendale until moving to Seattle.
He was the fourth territorial superintendent of schools and served from 1880-1882.

Dr. J. S. Houghton died at his home in this city yesterday morning, at 8:15 o'clock, from a complication of diseases contracted in the army. Dr. Houghton was assistant surgeon of the Eighth Maine volunteers, and has been a great sufferer ever since the war from his army service, and for several years has been unable to follow his profession on account of his health.

The doctor came to the then territory of Washington in 1871, making his first home at Port Gamble, where he was for a long time in the employ, professionally and otherwise, of the Port Gamble Mill Company.

Removing to Eastern Washington, he settled at Goldendale, and while in that place was for three years superintendent of pubic instruction for the state. Again returning to Puget sound, he settled in Seattle in 1883, where he has since resided. Dr. Houghton was a man of extensive information, familiar with the current events of the day, and all who knew him admired him. He was a member of the Unitarian church on Seventh street and a prominent member of Stevens Post, of the Grand Army, having served several terms as surgeon of the post and also as chaplain.

The doctor leaves a widow and three daughters, Mrs. Lord, residing at Astoria, Or., Mrs. E. W. Wood, of this city, and Miss Jennie M. Houghton, a well-known member of the First Methodist choir.

The funeral services will be conducted by the Rev. W. G. Eliot, at his church, at 2 p.m. on Tuesday and by Stevens Post, of the G. A. R., at the cemetery.

The members of Stevens Post, G. A. R., are requested by Commander S. W. Clark to meet at the post room this afternoon at 1 o'clock, to attend the funeral of Comrade Dr. J. S. Houghton. Services at Unitarian church, on Seventh street.