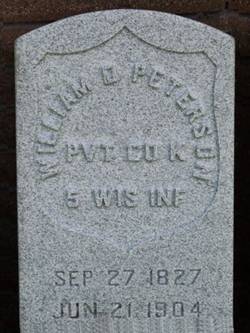 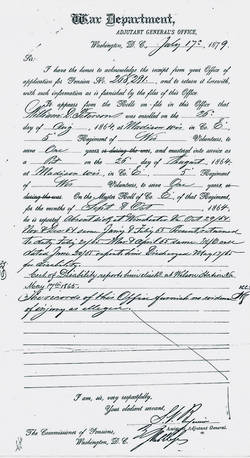 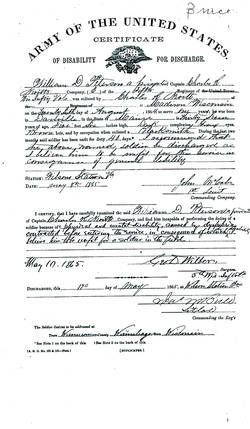 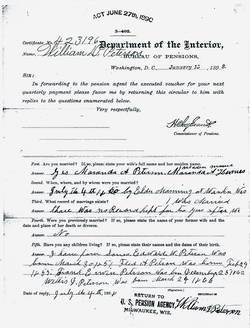 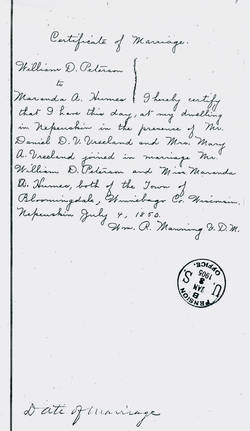 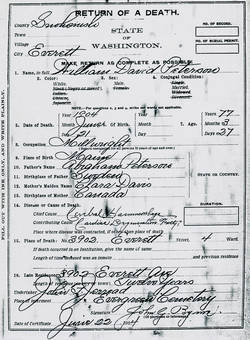 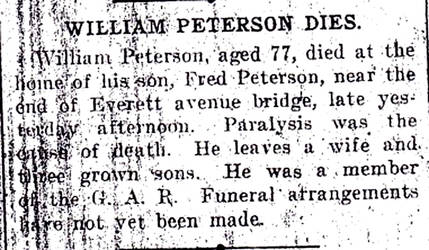 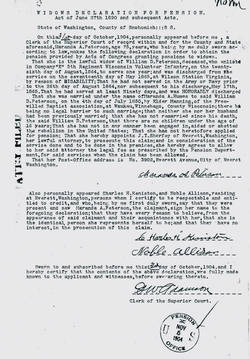 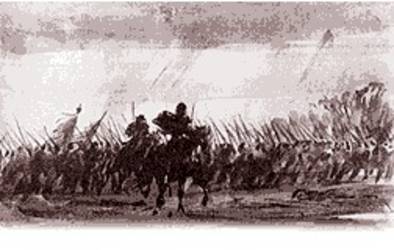 The 5th, a three-year regiment, spent its entire existence within The Rebellion's "eastern theatre," mostly with the Army of The Potomac.  It left Wisconsin on 7/24/61.

The unit saw its first combat action 2/5/1862 at Williamsburg, VA during the opening act of Union Gen. George McClellan's Penninsula Campaign. Shortly thereafter, on 9/14/1862, it was held in reserve at Crampton's Gap, MD but once again saw action during the 9/17 bloody battle of Antietam/Sharpsburg, MD. The 5th concluded the year of 1862 with the Federal debacle at Fredricksburg, VA.

In October, 1863 the regiment was on duty in New York City following the City's draft riots. The next month found it at Rappahannock Station, VA helping to carry the Rebels main fort and redoubts during Union Gen. Meade's Mine Run Campaign.

Spring 1864 placed the 5th in Union Gen. U.S. Grant's Overland Campaign.  Actions therein included Spottsylvania, Cold Harbor and Petersburg. It was then sent to assist in the defense of Washington, D.C. during the northward raid of Confed. Gen. Jubal A. Early. Mustering out of initial enlistees followed.

In mid-July, 1864 a re-organized "battalion-sized" version of the 5th was mustered into Federal serviced. This incarnation was composed of re-enlisted veterans and new recruits. Moved into Virginia's Shennandoah Valley, this unit saw action at Snicker's Gap, Charles Town and Cedar Creek.

Further re-organization of the 5th came in October, 1864 when it was reconstituted as a full regiment. This unit moved to the field of conflict around Petersburg, VA where it participated in the three day engagment around Hatcher's Run.

On February 5-7, 1865, the regiment participated in the relief of Ft. Stedman during the attempt by Confederate forces to break out of besieged Petersburg.  On the heels of that failure the unit took part in the capture of Petersburg before beginning the pursuit of retreating Rebel forces under the command of Confed. Gen. R.E. Lee. During the battle of Sailor's Creek the regiment "advanced through a swamp, waist deep, in the face of a galling fire and compelled the enemy to surrender." After being present during Lee's surrender of The Army of Northern Virginia on 4/9/65 at Appomattox Ct. House, VA, the 5th moved on to see final muster during July at Madison, WI.

While there is some documentation indicating William David Peterson was born in March, 1827, data taken from his death certificate points to his birth date as being September 30th of that year. Place of birth was Danville, ME.

His parents were Abraham (b.1798 Switzerland or Sweden) and Clarissa "Clara" (nee Davis, b. 1799 England or Canada) Peterson. It appears he had at least four siblings: Elias (b. 1833 ME), Henry (b. 1834 ME), Alexander (b. 1840 ME) and Charles (b. 1844 ME). By 1840 the family had moved from Danville to Salem, Franklin Co.  By 1850 they had left Maine and resettled in Bloomingdale, Winnebage Co., Wisconsin. At that time William's father's occupation was noted as labourer.  All other males in the family, including William, were listed as farmers.

While no information exists pertaining to William's childhood, formative or teenaged years, he apparently stayed close to his birth family as he grew older as evidenced by the fact that he, too, moved from Maine to Bloomingdale, WI. It was there on 7/4/50 he married a Bloomingdale woman, Miranda A. Humes (b. 1830 IL). Initially the young, married couple lived with Miranda's parents.

During the summer of 1864 William, then a 5'6", dark-complexioned, blacksmith enlisted in the U.S. Army. Likely the enlistment was prompted by receipt of a sizeable monetary enlistment bounty/bonus as, at approximately 37 years of age, Private Peterson was far older than he average 26.7 year old Civil War soldier.

Private Peterson's age may not have served him well as he did not adjust well to the rigors of Civil War army life in the field. Having enlisted in August, from September '64 through 2/20/65, he was listed as "sick in hospital" at Winchester, VA. Available documents do not identify the reason for the debilitation.

Having returned to duty in late February, 1865 private Peterson’s health continued to be a problem. In later years, in a pension document William related the following: (Around) March 17, 1865 at or near the South Side Railroad he was disabled by marching from camp opposite Petersburg  (VA) to Hatcher's Run....(and was) exposed for two days and three nights on the battlefield. The first night it froze quite hard. (The) second night it snowed nearly all night. (On) the morning the 2nd (day) it commenced raining and rained all day. (The) third night it commenced freezing about twelve o'clock. Our order was to march to camp about 14 miles. (I) was in good health when I enlisted (but) the exposure to the storm was too much for (me). (I) was unable to do any duty afterwards. Shortly thereafter, in May, ’65, with the War over, Private Peterson was granted a medical disability discharge.

The 1860 U.S. census had William and family residing in Omro, Winnebago Co, WI where he was noted as a master carpenter. By 1870 the family, although still in Wisconsin, was in Peshtigo, Oconto County with William listed as a laborer.  In 1880 he had returned to Omro where he once again listed his occupation as blacksmith. There is no census data available for 1890.

By 1900 the Peterson's had departed Wisconsin in favor of the arid environs of the community of Lakeside, adjacent to Lake Chelan located in Chelan County, north central Washington State. When and why the westward move was made is not known. In Lakeside William's occupation was given as "farmer." Besides William and Miranda, also in the home were son Edward and his wife. Edward's occupation was listed as "pilot." Likely Edward was employed on one of the steamboats that plied the waters of the lake.

On 6/21/04 former Civil War soldier William D. Peterson died in Everett, Snohomish County, Washington at the home of his son Fred.  Once again, when and why he and Miranda moved from eastern to western Washington is not known.   Although William's obituary noted that he had lived in Everett for 12 years, but based on the 1900 census this is highly unlikely. Cause of death was listed as cerebral hemmorrge. William had suffered a paralytic stroke. A contributing factor was a bad heart. The death certificate placed his age at 77 years and 3 months.  Burial was in Everett’s Evergreen Cemetery.

At the time of his death William was receiving a monthly U.S. government stipend based on his illness-ridden Civil War service. His widow, Miranda, continued to receive a portion of that pension until her death. She last received an $8 per month payment to 6/4/07. Payments then stopped because of her death on 7/30/1907.  Miranda was buried next to William at Evergreen Cemetery.