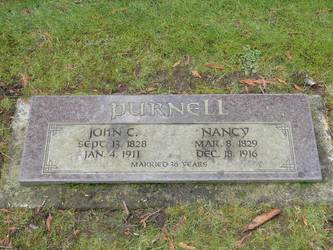 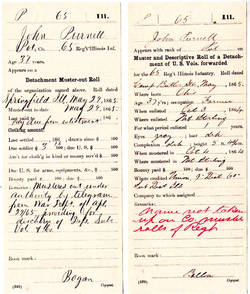 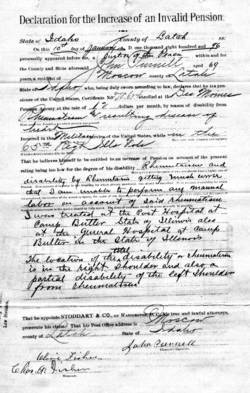 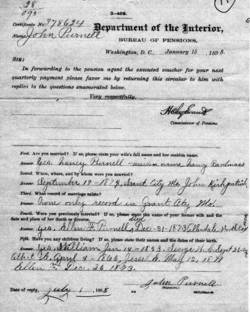 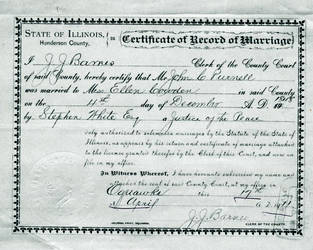 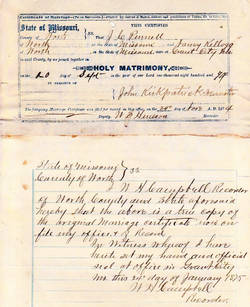 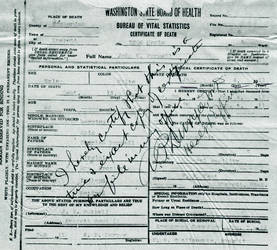 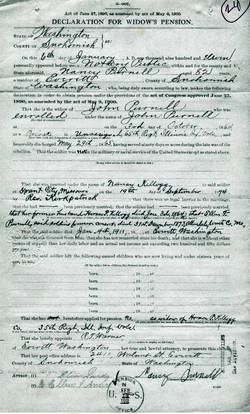 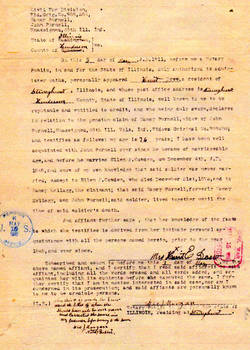 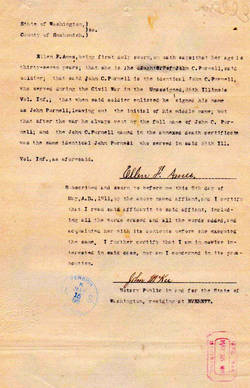 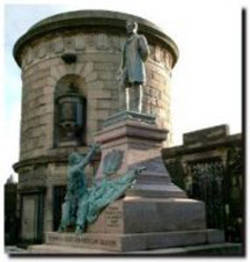 Initially known as the "Scotch Regiment, this western theater unit, after Federal muster, was ordered to Martinsburg, WVA. When Union troops stationed at Harper's Ferry, VA surrendered on September 15, 1862, the soldiers of the 65th were taken prisoner by the enemy and although paroled, were not exchanged for return to duty until April, 1863.

After being returned to duty the 65th served in the Union campaigns in eastern Tennessee taking part in the battles around Chattanooga and in the defense of Knoxville. Following a severe campaign during the winter of 1863/'64 the regiment reenlisted as a veteran organization and went home on furlough in March of '64.

Returning to the field the 65th joined Union Gen. W.T. Sherman's forces in their Atlanta, GA campaign. This found them sharply engaged with the Rebels on 6/15 between Kennesaw and Lost mountains. Skirmishes, many of them severe, continued the remainder of that month and into July. Battle actions during the remainder of the year included Jonesboro, GA, Columbia, Franklin and Nashville, TN.

In January, 1865 the regiment was transferred from Tennessee to North Carolina. Landing at Federal Point on 2/7 it soon was skirmishing with Confederate forces. These actions preceded their participation in the battle of Smithtown.

During the waning months of The War the 65th lost membership from troops being mustered out of service, but also gained additional forces from other Illinois regiments being consolidated into the unit. Final discharge and muster came in July, 1865

John C. Purnell died in Everett, Washington on January 4, 1911. His death certificate indicates that at passing he was 82 years of age which would denote his birth year as 1829. This is significant because available documents make no mention of his birth year; only the month and day: September 13th.  In the 1850 U.S. Census Mr. Purnell listed his birth location as Ohio.

Also, Mr. Purnell's death certificate notes his father as Charles Purnell (b. VA). However, the notation for his mother is only: Mrs. Crozier (b. England - 1900 census says Ireland -). Current members of the Purnell lineage have no explanation for this motherly entry, but indicate that family lore denotes John's middle name to have been Crozier.

First firm, personal documentation pertaining this future Civil War soldier dates from 12/4/48 when, in Henderson County, IL he married to Ellen F. Cowden (b. ca. May, 1830 OH). The 1850 census placed the young couple in or near the Henderson County, Illinois community of Olena where John listed his occupation as "cooper." Also in the home was the couples' first child, newborn infant daughter Mary. E. Purnell. (Mary apparently did not live long as she was not mentioned census-wise ten years later or thereafter.

On 1/14/54 the Parnell’s' second child, Charles William came into the world. There is some question whether his state of birth was Ohio or Illinois, but it is the latter that is noted in the 1860 census. Their third, George W., was born in Illinois in 1858.

The 1860 census noted the Purnells as still residing in Olena, IL, but on 10/3/64 when John was drafted into the U.S. Army, they were likely living in Mt. Sterling, Union Township, Fuller County, IL.  At that time John was characterized as being 5' 4-3/4" tall, having grey eyes, a dark complexion and dark hair. His occupation was then noted as "farmer." At the age of 35 years, he was well above the average age of a Civil War soldier; that being approximately 27.5 years.

Mustered into Federal service, private Purnell was received at the rendezvous (induction) center located at Camp Butler near Springfield, IL 10/26.  From that date on his military experience spiraled downward.

By his own admission, private Purnell was taken sick within one month of his entering the service and furloughed home not only to vote in the November, 1864 presidential election, but to regain his health under the care of one Dr. Anderson.  In 1883 Dr. Anderson wrote the following: "I was John Purnell's family physician for thirteen years prior to his enrollment in the army on 10/3/64.  He was in good health and free from rheumatism as far as known to me. I saw him when he came home on furlough (and) found him at that time a cripple unable to walk caused by rheumatism for which I treated him until April, 1865 with but little success and so reported when he returned to his company."  John Purnell again: "When I returned to Camp Butler about everyone had gone to the front that was there when I left for home and I did not know where to find any of them."

On 4/5/65 Private Purnell was admitted to the Camp Butler post hospital with a diagnosis of hepatitis. On 4/14 he was transferred from the post hospital to a U.S. Army general hospital near Springfield, IL with the measles. From there he was reportedly returned to duty on 5/19 before being mustered out of the military on 5/29/65. So concluded John Purnell's military saga.

Army life, such as it was, behind him John Purnell returned to Mt. Sterling where Dr. Anderson wrote: “I saw him again after he was discharged and found his (rheumatoid) condition worse than before. The disease was more general affecting limbs, stomach and bowels in a frightful manner and endangering life."   During the fall months of that year his condition apparently became so bad that for a period of four months he was not expected to survive, but survive he did.

Following this near brush with death John and family chose to remove from Illinois.  Thus, on 4/4/66 when John and Ellen's fourth child, son Albert/Robert C. was born the birth was in Missouri.

The census for 1870 found John, his wife and three children farming in or near the Worth County community of Allen/Allendale. It was there the next two children were born: Jesse/Jessie E. on 5/12/71 and Ellen "Ella" F. on 12/26/73. Sadly, four days following the birth of Ellen, Mrs. Purnell died. Most likely the cause of death was childbirth complications.

On 9/19 or 9/20/73 in Grant City, Worth Co., MO, barely nine months after his wife's passing John remarried to Nancy Kellogg (nee Bardmass b.3/8/29 IL). The second Mrs. Purnell had been previously married to one Horace P. Kellogg who had served during the late war as a private in the 35th Missouri (Union) infantry. Mr. Kellogg had died 1/5/64 in Perry County, IL. Whether or not the passing was War-related is not known. Horace and Nancy had produced six children, all of whom - if living - were adults by the time of her remarriage to John. John and Nancy would have no children of their own.

It appears that for an unknown period of time after their marriage John and Nancy remained in Worth County, Missouri. By the time of the 1880 census, however, the family had removed to Nebraska where John was farming in or near the Saunders County community of Valparaiso.  Interestingly, the household listing notes only John and his three children, Albert, Jessie and Ellen, but not second wife Nancy. She does, however, show up in an 1885 reading for Holt County, Nebraska. Again, in the household at that time were John, the two sons, and daughter Ellen.

Of note during this Nebraska period is that on April 18th, 1882 John appears to have been granted a $2 per month U.S. Government disability pension based on his sufferings from rheumatism in his shoulders and resulting heart problems which traced back to his brief period of Civil War soldering. The monthly stipend would increase throughout the remainder of his life to an apparent peak of $20 per month.

On an undetermined date after 1890 John and Nancy departed Nebraska for the Pacific Northwest as by 1/10/96 they were residing in Moscow, Latah county Idaho located in the panhandle on the Idaho/Washington border. John's occupation at the time was noted as "horse breeder." It is unclear if John was working for himself or someone else, but a mere two years later (5/6/02), he and Nancy were living at 3206 Maple St. in the western Washington State Snohomish County City of Everett.

1910. Another census and John and Nancy were still in Everett. Washington. This go-round John indicated he had his "own income."

On 12/29/10 former Civil War soldier John Purnell fell ill and came under a doctor's care. Five days later, on 1/4/11 he died. Cause of death was listed as lobar pneumonia with general senility contributing. Utilizing 9/13/29 as his birth date, John was 82.3 years of age at passing. Notifying authorities of the death, which likely occurred at home, was son J. (Jesse/Jessie) E. Purnell of Everett. It is unclear if J.E., lived in Everett or Moscow, ID at the time and had merely travelled westward upon notification of his father's final illness.  Burial was in Everett's Evergreen Cemetery.

Two days after John's death Nancy began the paperwork process to obtain at least a continuing portion of her late husband's Civil War disability pension. Her address at this time, and until her death, was listed as 2411 Maple, Everett, WA. This was apparently the residence of John's married daughter Ellen Ames. That Ellen had to assist her stepmother with paperwork process is evidenced by the fact that Nancy signed documents with "her X." Whether or not she had ever learned to read or write or was unable to do so late in life because of illness, etc. is not known. Nancy was granted a pension stipend of $12 per month. She died 12/18/16 in Everett and was buried beside John.