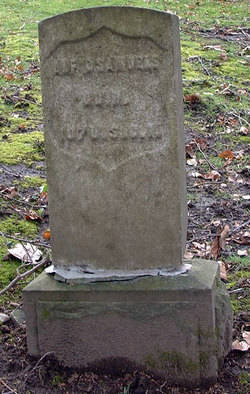 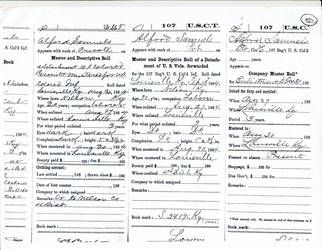 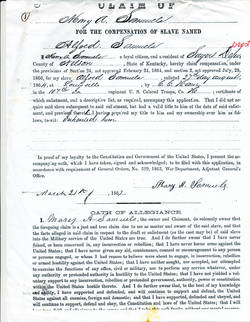 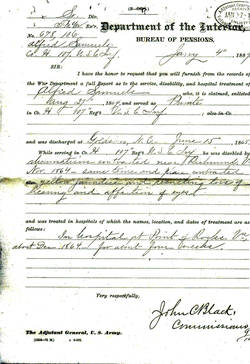 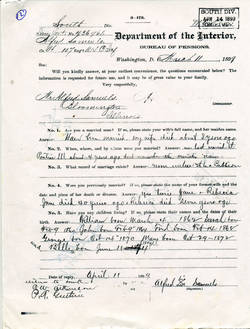 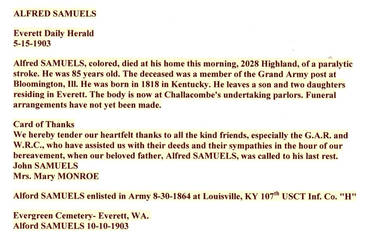 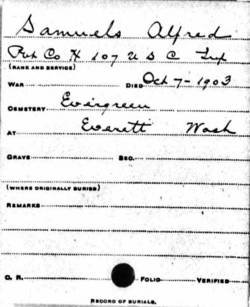 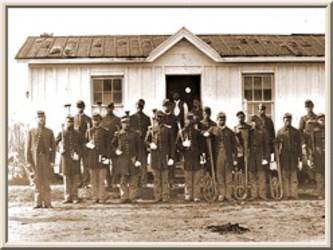 At the outset of America’s War of the Rebellion U.S. President Abraham Lincoln rejected the idea of abolishing slavery or tapping African-Americans for military manpower.  By mid 1862, however, Lincoln had come to recognize that one way to weaken the surprisingly resilient Confederacy was to undermine slavery.

As such, following promulgation of his 1/63 Emancipation Proclamation, the Union Army initiated a vigorous recruitment drive which ultimately saw fielding of 166 black regiments: 145 of infantry, 7 of cavalry, 12 of heavy artillery, 1 of light artillery and 1 of engineers.  The 107th was one of those units.

The 107th saw duty in KY until 10/64 when it was ordered to Baltimore, MD and thence via City Point, VA to the siege of Petersburg.  In late December, 1864 and during January, 1865 it moved to Ft. Fisher, NC where it participated in the bombardment and capture of Wilmington then, in March and April, moved northward through the Carolinas with the armies of Union Gen. W.T. Sherman.  Movements on Kinston and Goldsboro preceded action at Cox’s Bridge and the advance upon and occupation of Raleigh, NC.

Following the surrender of Confed. Joseph E. Johnston’s army the 107th was assigned to various locations in NC and in the Dept. of the South until it received final muster.

Note: Family spelling is Alfred, but Alferd also turns up.  The surname was, at time, reflected as Samuel.

Alford Samuels was born a slave.  Documentation of his birth year ranges from 1818, through 1828 and on to 1834.  Although military records reflect the latter, most likely, he was born in 1818.  That meant Private Samuels was 46 years of age at the time of enlistment, far above the 30 years he claimed and the 26.7 average age of a Civil War combatant.  The location of Alford’s birth was likely Nelson Co., KY to parents who were slaves owned by the Samuels family after whom a town in that county is named.

No information is available pertaining to his childhood, formative, teenaged or young adult years, but as the 5’ 3 ½ “ Samuels listed his occupation as “laborer” when he joined the army, without doubt he grew up performing field duties of a southern slave.

In August, 1864 Alford enlisted in the U.S. Army, for which he was paid a $100 enlistment bonus or “bounty.”  On 3/22/67 Mary Samuels who had inherited Samuel and held “title to him” when he joined the army petitioned the U.S. Government requesting compensation for her “lost property.”  The outcome of the request is not known.

Despite the combat-active nature of the 107th, dark complexioned private Samuels’ most serious battles were with illness.  In 1/65 he was listed as “sick in hospital”, first at a local facility, but thereafter at the larger Point of Rocks Hospital in Goldsboro, NC.  He remained there until mustered out of the service a free man.

The nature of Alford’s ailment was likely rheumatism and yellow jaundice which he contracted in 11/64 near Richmond, VA.  Both apparently affected is hearing and eyesight.  In later years Alford would request and be granted a U.S. Government invalid pension based on a laundry list of ills traced back to his days of Civil War soldiering.  At death he was receiving a $10 per month stipend.

By the 1880 U.S. census Alford was listed as married to “Jennie” (b. ca. 1840 Atlanta, Logan Co., IL).  Some of Alford’s ancestors believe Jane/Jennie were one and the same, but such does not appear likely as Jennie is not a common reference to the name Jane and that name is not mentioned during Jane’s documentation.

Finally, Jennie’s birth year is different from that attributed to Jane.  The 1890 U.S. census, in its entirety, is no longer available.  Too bad.  That data may have shed a great deal of light on Alford’s marital status because by 1892, Jennie too, for whatever reason, has disappeared from documentation.

On 9/7/93 Alford married Rebecca “Beckie” Grissom/Grisson Lewis (b. unk.).  However, for the 1900 U.S. census Alford noted that he was not married.  The fate of “Becky” is not known.  Alford Samuels died 5/15/03 at his home in Everett, WA.  Likely he had moved to the Puget Sound area because his adult children, John Wesley, Mary and Belle were living in the area.  At death Alford was 85 years of age.