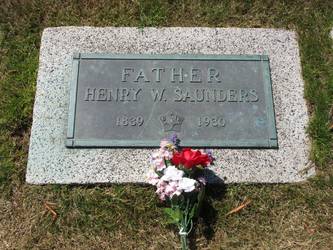 Although Henry W. Saunder's - while in the U.S. military his surname may also have appeared as Sanders - pension card indicates he spent time in the 3rd, no regimental personnel roster has been located to confirm that association. As such, until Private Saunders' military service records can be obtained the nature of his affiliation this regiment cannot be determined.

The 9th Kansas was a three year, western theater cavalry regiment. It was created by consolidating independent battalions, squadrons and detachments originally intended for other organizations. Eight of the 9th’s original companies, including company "C" were recruited during the fall and winter of 1861/'62.

Soon after the unit's permanent organization was completed, five companies, including "C," were detached and sent to various points from the Missouri River to the Rocky Mountains. From that time onward detachments of the 9th served at widely scattered points, so the regiment was scarcely ever united as a single organization.

During its entire period of service the 9th was employed in hazardous warfare engagements along the Kansas/Missouri border. There, it rendered valiant and faithful service against bushwhackers and irregular, guerilla forces of the enemy. These duties, as important as they may have been, provided little opportunity for the regiment to make a great name for itself.

Henry Welcome Saunders was born 1/25/39. His place of birth was Madison County, NY.

Noting the birth states of the Saunders children, at some point in time between 11/12/44 and 9/22/48 Azem moved his family from New York to Wisconsin. Further, sometime after 4.11/55 they had quitted Wisconsin and removed to Kansas. The U.S. Census for 1860 found the Saunders in Otoe, Otoe County, KS Terr. Indicating a post-1860 intra state move, during his later years "Squire" Saunders - as he was familiarly known - served as a justice of the peace in Americus Township Lyon County, KS.

Henry and Annie's only child, Devillo Dewitt Saunders was born 2/24/70 in Rice County, KS. Annie likely died while - or not long after - giving birth to Devillo because the U.S. Census for that year found Henry and his five month old son living with Azem and Purlina in Americus Township Lyon County, KS. Annie was/is buried in the Americus Cemetery.

Henry and Addie would produce two additional children before her death on 2/17/96. Those two children were: Maud Saunders (b. 3/80 KS) and Ralph Henry Saunders (b. 8/21/83 Emporia, KS). The Saunders family remained in Kansas until sometime during 1886.

According to Latham's newspaper obituary, in 1886 the Saunders   departed Kansas and took up homestead farming - likely growing wheat - in Adams County located in the eastern part of Washington Territory. What had drawn them to the Pacific Northwest community that became Ritzville is not known.

By the dawn of the twentieth century Addie was gone - no official record of her death or her final resting place has yet been found   - but widower Henry along with sons Devillo, Ray and Ralph continued to till the soil in Ritzville. Henry would continue to do so for the next two decades.

On 10/6/02, while in Ritzville Henry applied for and was granted a U.S. Government disability pension based on his days of Civil War soldiering. Without access to his pension files, the details of that monthly stipend are unknown.

Circa 1924 Henry gave up farming in Ritzville and moved westward to the King County, Washington city of Seattle. It appears that moving to the Puget Sound region he took up residence with son Ralph who lived at 4135 Midvale Avenue just north of Lake Union in what is now Seattle’s Wallingford District.

Henry died in his son's home on 10/9/30. While heart issues appear to have been the primary reason for his passing, it must be remembered that - at death - the old Civil War soldier was ninety one years, eight months and fourteen days old. He had lived a long life.

* William H. H. Knight reportedly served in Co. “G” of the 9th Kansas Cavalry. He survived the war and was/is buried in the Acacia Memorial Park located north of Seattle in the city of Lake Forest Park.