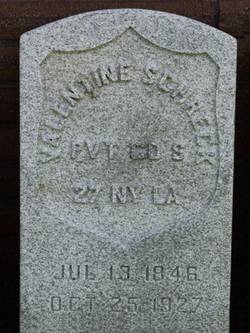 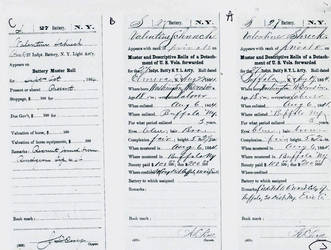 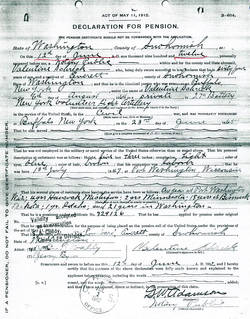 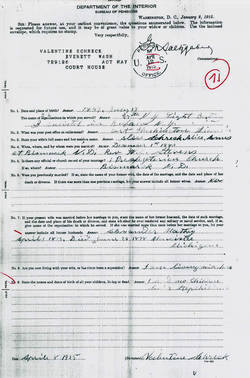 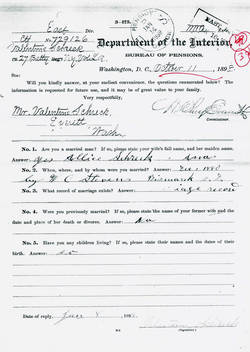 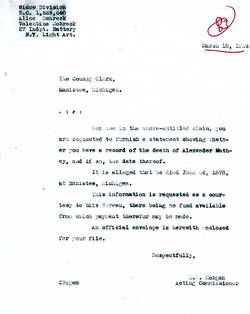 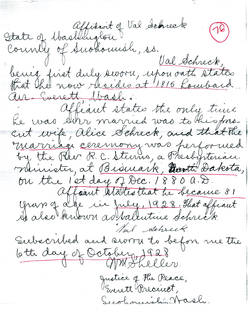 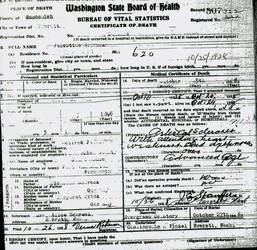 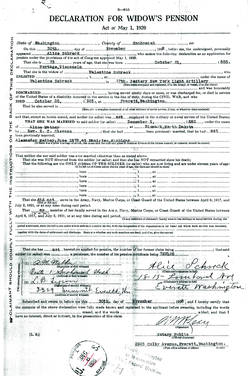 This three year "eastern theater" artillery unit left the state of New York on 12/22/62 for Washington, D.C.; served in the defenses of the National Capital, and the Artillery Camp of Instruction, 22nd Department of Susquehanna, from July, 1863; at and near Washington, D.C. 22nd Corps from January, 1864; at Washington, D.C. from May 6, 1864; in 1st  Division, 9th Corps, Army of the Potomac, from June 5, 1864; and in the Artillery Brigade, 9th Corps, from July 30, 1864. During the 1864 months it was with the Army of the Potomac under Union Gen. Ulysses S. Grant as they moved southward through Virginia in the Overland Campaign. That campaign ended in the siege of Petersburg which, in April, 1865 would, for all practical purposes, bring an end to four years of bloody civil war.   The battery was honorably discharged and mustered out 9/22/65.

While available records raise some questions regarding his birth year, the preponderance of evidence points to Valentine Schreck being born on July 13th in the year 1847. His parents were Nicholas (b. ca. 1810 Prussia/Germany) and Mary Margarett/Maria Margaretta (nee Brick b. ca. 1816 Germany) Schreck.

The Schrecks immigrated to America between 1839 and 1841. On September 2, 1846 Nicholas, a farmer and, later, a teamster, purchased forty acres of land  in Wisconsin and established a farm  That farm, where Valentine was likely born, was located twenty miles outside  of the Wisconsin City of Milwaukee.

Beyond his birth, the next documental information on Valentine comes from his three year enlistment in the U.S. Army volunteer artillery on 8/8/64.  Accepting his birth year as 1847, at that time he was only weeks past having turned 17 years of age left his Port Washington home and travelled to New York State to join a volunteer army artillery battery.  Why this young man, who noted his occupation as "laborer", enlisted in New York rather than Wisconsin is not known. Perhaps the enlistment bonus or "bounty" he would receive was larger in New York than his birth state. That monetary sum was $300, with $100 generally paid upon enrolment and the remainder due later.  Upon enrollment his vital statistics were noted as:  5’2.5” in height, having blue eyes, brown hair and a fair completion.

Private Schreck ‘s relatively short period of military service, despite the intensity of the combat action his battery was likely exposed to during the latter part of 1864 and up to the end of hostilities in 1865, looks to have been very benign. From the time of having joined his unit as a new recruit until his final mustering out on 6/22/65 he was always present on the company/battery muster rolls. His muster out notes included only: Last paid to 12/31/64; $69.03 clothing drawn in 1st year; due from U.S. $300 bounty.

Following his separation from the military Valentine returned to Port Washington, WI. He remained there for approximately one year before removing to Michigan.  It was there the 1870 U.S. census found the single laborer residing in or near the Hancock County community of Houghton.  He did not remain in Michigan long; however, as sometime shortly after the 1870 census he apparently departed that state for an undocumented reason and resettled in the State of Minnesota.  The location of his Minnesota residence is not known. Again, he did not remain there long as sometime in 1872 Valentine left Minnesota for Bismarck, Dakota Territory.   In 1880 he was in the latter place noted by the census as a "boarder" and "hotel worker."

On 2/1/83 Valentine who, with his “readymade” family was living in the community of Bismarck, Burleigh Co. Dakota Territory and working as a harness maker, applied for and was, on the basis of his Civil War soldiering, granted a tract of land on which he built a dwelling, dug a well and resided with his family at least four days a week except during the winter months when they lived in Bismarck, so the children could attend school. With the documents available it is difficult to tell if the homestead was 30 or 80 acres.

On 9/22/88, after five years during which  Valentine primarily worked for himself tilling the earth planting wheat and oats, but was also  “superintending store”, he was granted ownership of the homesteaded land. Of note during this homesteading period is that on 12/31/85 the Bismarck Tribune newspaper ran an article heralding the fact that Valentine Schreck had been appointed a deputy Federal U.S. Marshall.

No U.S. census data for the Bismarck area is available for 1890, but a Tribune article dated May 4th of that year announced that a number of Dakotans, including the Schrecks, were taking the train westward to resettle in the newly formed State of Washington. The Civil War soldiers/sailors census taken later that same year registered Valentine in the south western Washington Lewis County community of Centralia and suffering from rheumatism. (Note: there is some documental inference that after leaving Bismarck and before settling in Washington the Schrecks may have resided for a time in the State of Idaho.  Both 1890 and 1891 are mentioned for this stay.  However, based on the fact that of 10/13/90 Valentine was living in Centralia, WA and the fact that he later listed his post-war places of residence as Wisconsin, Michigan, Minnesota, Dakota Territory.

10/21/91, while living in Centralia, WA Valentine applied for a U.S. Government disability pension.  That paperwork process continued into 1892 with his being granted a $6 monthly stipend in April of that year. Basis for the pension was rheumatism and sciatica problems which he traced back to his period of Civil War soldiering.

For some unknown reason and on an undocumented date, in 1893 the Schrecks quitted Centralia and moved northward within the western part of Washington State to settle in Everett, Snohomish County.  It was in that Puget Sound area city on 2/6/95 that Valentine underwent a medical examination looking toward gaining an increase in his existing $6 per month pension. The plan, however, went awry as instead of gaining a pension increase his existing stipend was cancelled on the grounds that his rheumatism, sciatic and piles (hemorrhoids) were not connected to his Civil War service and were, therefore, not “ratable” for receipt of a pension. Last paid in September/October, ’95, despite affidavit testimony that he needed to use crutches or a cane several months of the year in order to get around, on 4/8/96 his pension ceased. Thus began the lengthy process, which at one point included a letter being written to the Honorable F.W. Cushman of the U.S. House of Representatives, to have his pension status reinstated.  In the meantime, life went on for the Schrecks.

1900.  As of this census count Valentine and Alice were still in Everett with him remaining employed as a harness maker. In later years it would be claimed that he had obtained the position of janitor in the Snohomish County Court House in Everett as early as that same year, but a notation from 7/27/09 listed his occupation as “steaboatman.”  However, during the census taken a year later, Valentine was employed in Everett as janitor in the courthouse while Alice was noted as a dressmaker working from her own “in home” shop.”  The census would read the same for 1920.

In 1927 Valentine’s health began to fail dramatically.  By February, 1928 this proved to be serious to a point where a request was made to have his pension jumped to $90 per months because for the past “two or three” months he had been bed ridden “a greater part of the time” with a professional nurse in attendance.  These were conditions for which he was also under the care of a physician.  On 10/10 that doctoral care became more intense and, on 10/25/28 Valentine, apparently at his home located at 1815 Lombard, Everett died.  Cause of death was listed as atherosclerosis with attending heart trouble and dyspnea the latter of which he had struggled for one year.  Contributing was “advanced age.  At death the former Civil War artilleryman, homesteader, U.S. deputy marshal, harness maker steamboatman and retired janitor was aged 82 years, 3 months and 12 days. Burial was in Everett’s Evergreen Cemetery.

Following her husband’s passing Alice applied for and began receiving $30 per month of Valentine’s pension. That amount would ultimately reach $40 per month, the maximum that the widow of a Civil War veteran could receive.

In terms of her residence, Alice remained in she and Valentine Lombard Avenue home in Everett through the 1930 census but during the mid to late ‘30s she was noted as residing at two addresses in north Seattle in King County south of Everett.  Both were apparently residences of  her married daughter, Rose, now the Mrs. N.B. Allen.

Exactly where Alice was residing during the census of 1940 is not known.  As of this writing data from that tally has not been released to the public.  However, we do know that in 1941 she was back in Everett on Lombard Street.

Alice died in Everett on August 20, 1946.  Burial was beside Valentine at Evergreen Cemetery in Everett.