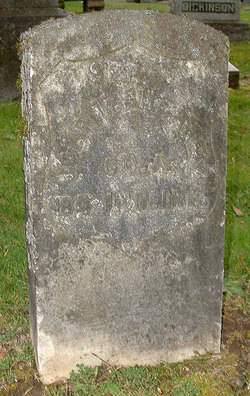 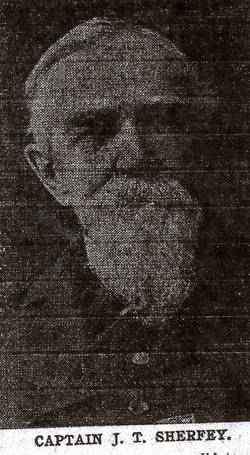 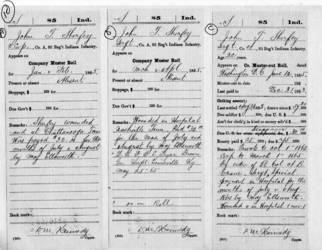 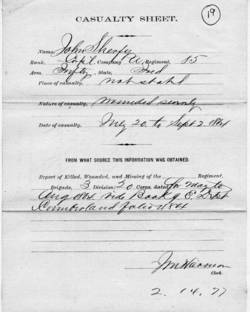 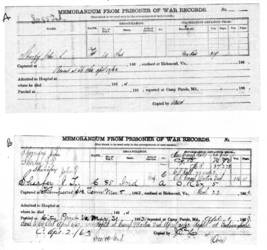 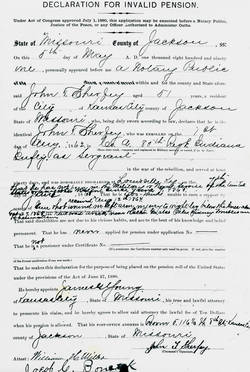 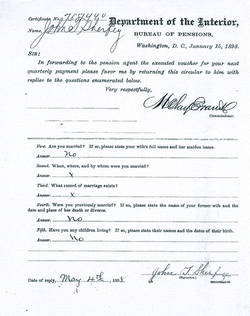 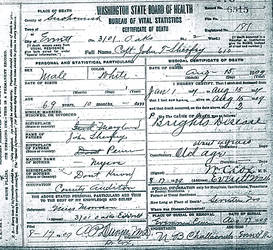 The 85th, a "western theater" unit was mustered into Federal service on 9/2/62 then moved to Covington, KY, Falmouth, VA and later to Danville where it remained until February, 1863 when ordered to Franklin, TN.

On March 4th and 5th, 1863 while on a forage and scouting expedition the regiment first met the enemy during the battle of Thompson's Station/Spring Hill, TN.. During the ensuing five hour conflict the enemy was pushed back several miles until reinforced by Confed. Gen. Nathan Forrest's cavalry entrenched behind stone fences. From that point the action went downhill for the 85th as they were completely surrounded and forced to surrender. Such ended the regiment's baptism of fire!

After capture, the 85th was marched to Columbia and then to Tullahoma, TN suffering much from exposure to the elements and lack of food. Internment in Libby Prison, Richmond, VA then preceded the unit's 3/31 exchange.

Freed from Rebel internment, the 85th was ordered back to Franklin where it engaged in skirmishing and fighting until the forces of Confed. Gen. Braxton Bragg fell back from the area. It then passed the summer, fall and winter on railroad guard duty at Murfreesboro, TN.

In April, 1864 the regiment joined Union Gen. Wm. T. Sherman's forces for the Atlanta, GA Campaign. It was subsequently engaged at Resaca, Cassville, Dallas, Golgotha, Kolb's Farm and Peachtree Creek. During the latter battle the 85th was the first to receive the enemy's charge. Although the 85th's position held, their front was piled high with Confederate dead and wounded. Operations around Atlanta proceeded that city's fall. It next moved to Savannah where it participated in the siege and capture of that city.

January, 1865. Sherman's forces started northward through the Carolinas with the 85th‘s division being the first to cross into South Carolina. As for the regiment itself, it remained camped in the swamps around Savannah until February when it joined the march north. At Averysboro the regiment led the charge against enemy fortifications which netted many prisoners for the troops in blue.

As Sherman's horde moved north the 85th found itself access of the army at Bentonville, NC then moved on to Goldsboro, Raleigh, Richmond, VA and Washington City where it was mustered out of existence on 7/21/65.

John's date of birth is also in question. The month was likely December, but years differ between 1839 and 1840 for our purposes, we will adopt the latter as that matches information on Mr. Sherfey’s death certificate. .
Finally, his birthplace is questionable. Although one source indicates Maryland, most likely he was born in Putnam County, Indiana.

It appears John's birth father and mother sired two children: Christopher Columbus (b.1837), and John. In 1841 John's father died. Elmira then remarried to Frederick K. Taney (b. 1817 MD) and she and her two sons moved with Mr. Taney to Maryland where John reportedly “grew to manhood." Along the way he acquired at least one step-sibling, Rebecca (b. 1850 MD).

In August, 1862 John, then residing in Annapolis, IN enlisted in the U.S. Army. His physical characteristics were noted at the time as follows: 5’11 ½”, fair complexion, blue eyes and light hair; Occ: farmer.  Here it should be noted that throughout his period of service his surname would appear both as Sherfey and Sherfy. Of initial significance in Mr. Sherfey’s military tenure is that by October 1st he had been promoted from the rank of private to corporal.

During the latter months of 1862 and the first two of 1863 corporal Sherfey was noted as present with his company.  His first absence was following the March 4-5, 1863 battle of Thompson’s Station/Spring Hill, TN.  He and his regiment were captured on the 5thby the enemy. After being imprisoned he was next reported present for duty on after being sent to join his regiment at Franklin, TN on 6/10/63.

Corporal Sherfey again remained on the rolls as “present” until mid August, 1864 when he was listed as having been seriously wounded on 8/13 in actions around Chattanooga, TN preceding the major battle that was fought there on 8/21/64. The wound was to the left arm “a little above the elbow,” and was serious enough to warrant his hospitalization in both Chattanooga and Louisville, KY.   In all, it appears he never returned to his regiment. In late November l864 he was designated as unfit for field service and re-assigned to hospital duty. As such, it appears he spent the remainder of the war in hospitals.   During this period, on 3/1/65 he received a promotion from corporal to sergeant.

After exiting the service Mr. Sherfey's whereabouts are relatively unknown for the next fifteen years in terms of documentation. However, his obituary would later note that not long after the war's close he immigrated to Colorado where, as a member of the state militia, he acquired the title of "captain." As of this writing, whether he was an actual or honorary captain is not known. .

The 1880 U.S. Census definitely placed John in Colorado, residing in the town of Leadville where he was reportedly employed as a hotel clerk. Although no census data is available for 1890, documents dating from 1889 to 1891 place him in Kansas City, MO engaged in real estate and loans. It was there on 5/5/91 he applied for a U.S. Government disability pension based on arm and leg injuries, piles, kidney trouble and rheumatism tracing back to his years of Civil War soldiering. The pension request was granted as, at death, he was receiving a $12 per month stipend.

In 1892 John Sherfey moved westward to Everett, WA. Why the move was made is not known. However, he was to establish an admirable reputation for himself in his newly adopted state and city.

1908 found "Captain Sherfey" running for, winning and holding his only elected office. He was nominated for the office of Snohomish County auditor by a small plurality on the Republican ticket, but subsequently won the position "by a large majority."He would serve in that position until his death the following year.

At 3 pm in the afternoon on August, 2 1909 the Snohomish County, Washington Court House located in Everett, caught fire. Although he continued to suffer from one or more of the previously mentioned ailments stemming from his Civil War years, auditor Sherfey reportedly arose from his (sick) bed and insisted on going to the fire site in an attempt to save county property. This exertion apparently exacerbated his existing kidney problems which lead to his death on August 15th of that same year from Bright's disease. At his passing, the former Civil War soldier was 69 years and 10 months of age.

John T. Sherfey's Everett Herald obituary noted he was man of "sterling integrity" and a member of several fraternal orders including the Mason, GAR, Knights of Pythias, I.O.G.T and their auxiliaries. Mr. Sherfey was never married and apparently sired no children.