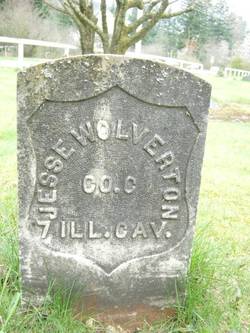 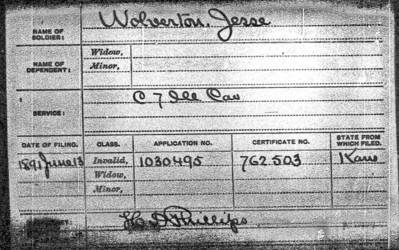 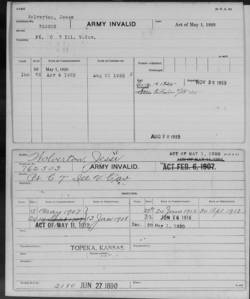 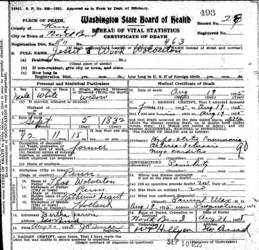 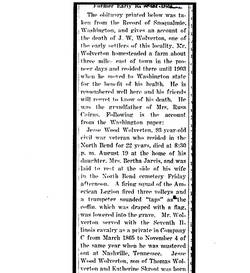 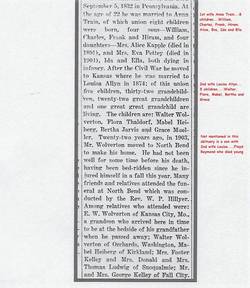 The 7th Illinois was a three year cavalry regiment. It served and fought in the western theater of the American Civil War. Although it was mustered into Federal service on 10/13/61 the organization did not come together as a complete entity until Christmas Day of that year.

November of '61 saw seven companies of the regiment engaged with the enemy at Summerville, MS. During December about half the regiment marched over 900 miles and was in contact with Confederate forces nearly every day.

On 12/26/63 the 7th fought the entirety of Confed. Gen. Nathan B. Forrest's cavalry without support. Understandably, the 7th came out second best. The regiment concluded the combat year a few days later at Moscow, TN.

After the surrender of all Confederate forces during late April, 1865 the 7th remained on guard duty in the south. The greater portion of this time was spent at Decatur, AL. It then marched to Nashville, TN for final muster and discharge.

Jesse Wood Wolverton was born on September 5. Birth years range from 1831 through 1833. Herein we are opting for 1832. His place of birth was Bucks County, PA.

Parents of Jesse were Thomas Jefferson Wolverton (b. 1793 Barnes County, PA - d. 3/9/1874 Washington County, KS) and Katherine/Catherine (nee Scout b. 1800 Holland or New Britain Bucks County, PA - d. unk.) Wolverton. Although it is not documented, it is believed the Wolvertons were a farming family.

During the month of January, 1858 in Iona County, MI Jesse married. His bride was Ann Elizabeth Train (b. ca. 1839 VT). After marrying the Wolvertons apparently settled and began farming in Campbell Iona County, MI.

On 3/3/65 Jesse and two of his younger brothers - Joseph and Elnathan - enlisted in Co. “C” of the 7th Illinois Cavalry. . At the time all three were reportedly residing in Hamilton, IL.

At the time of Jesse's enlistment we gain a glimpse of Private Jesse Wolverton the physical being. He was 5' 8.5" tall, had brown hair, dark eyes and a fair complexion. Occupationally he noted himself as being a farmer.

Without access to his military service records there is little we can say about Jesse’s military experience. We do know, however, that Private Jessee Wolverton - as well as his two brothers - were discharged back into civilian life in July, 1865.

At the time of the 1870 U.S. Census Jesse, Ann and their growing family were farming in or near the community of East Grove located in Lee County, IL. A year earlier Jesse had paid $480 for forty acres of land in the area.

On 11/3/73 that Ann died. Details of her passing are unknown. She was/is buried in the Union Cemetery located in Bureau County, IL.

How Jesse coped with raising his young children following Ann's death is not known. He did not remarry until 1876. In the meantime, a census tally in 1875 found him and six of his kids farming in Little Blue Washington County, KS.

On 1/1/1/76 Jesse remarried. The second Mrs. Jesse Wolverton was Louisa Serena Allyn. Louisa had been born 3/31/54 in McHenry County, IL.

Census takings between 1880 and 1900 placed Jesse, Louisa and their children - both his and theirs - in Greenleaf Washington County, KS. The tally at the dawn of the twentieth century found the two adults and their twelve children under one roof.

At some point in time between 1900 and early 1906 the Wolvertons quitted Kansas and moved to King County located in western Washington State. What had drawn them to the Puget Sound region of the Pacific Northwest and exactly when they arrived here are unknowns.

In King County, WA the Wolvertons settled in the community of North Bend east of the City of Seattle. North Bend was, and is, located in the foothills of the Cascade Mountains. It was there Louisa died on 2/17/06. No details of her passing have been found.  She was/is buried in the Mt. Si Memorial Cemetery located in North Bend King County, WA.

As if 1910 Jesse continued to reside in North Bend. Sharing his home was married daughter Bertha, her husband and young daughter.

In 1920, Jesse was still in eastern King County, but by the second decade of the new century his community of residence as Snoqualmie, a town located near North Bend. In the home with him was married daughter Mabel, her husband and thirteen year old daughter. 1920 would be Jesse's last U.S. Census tally.

* Joseph G. Wolverton enlisted as a private in the U.S. Army on 3/9/65. On that same date he was mustered into the 7th Illinois Cavalry Co. "C". He survived The War.

** Elnathan Wolverton enlisted as a private in the U.S. Army on 3/9/65. On that same date he was mustered into the 7th Illinois Cavalry Co. "C". He survived The War.