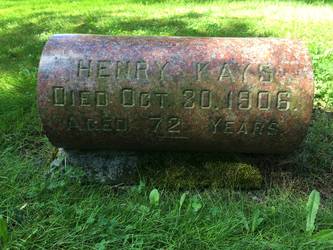 The 55th Illinois was a three year western theater infantry regiment. Known as the "Douglas Brigade" it was principally made up of young men raised on farms in   Fulton, McDonough, LaSalle, Grundy, DeKalb, Kane and Winnebago counties.

On 11/9/61 the regiment left Illinois and proceeded by rail and steamboat to Benton Barracks near St. Louis, MO. It received its baptism of fire at Shiloh/Pittsburg Landing, TN (4/6-7/62). During that conflict the 55th’ lost the heaviest of any Federal regiment except the 9th Illinois.

During the spring of 1863 the 55th participated in the early assaults upon the fortifications of Vicksburg, MS. With the capture of that city on 7/4 the regiment took part in the expedition against Jackson. As the year moved into fall the unit moved into eastern Tennessee then fought at Chickamauga, GA (9/18 – 20).

The winter of 1863/'64 was spent at Bridgeport, Bellefonte and Larkinsville, AL. During this period the regiment veteranized and the men went home on thirty day furloughs.

Returning to the field in 1864 the 55th embarked upon Union Gen. W.T. Sherman's movements to capture Atlanta, GA. During that campaign at the battle of Jonesboro (8/31 - 9/1) the regiment lost 36 killed and 86 wounded. This was about one half of its number engaged. The regiment's heaviest losses, however, were at Kennesaw Mtn. (6/27). After the capture of Atlanta it marched the entire distance on the picnic excursion termed the "march to the sea."

Early 1865 found the 55th marching northward through the Carolina. At the battle of Bentonville, NC (3/19 - 21) it lost one killed, one wounded and six taken prisoner.

After the surrender of Confederate forces under Gen. Joseph E. Johnston in May, 1865 the 55th moved to Washington, D.C. where it participated in the grand review. From there it travelled to Louisville, KY and on to Little Rock, AR where it was mustered into history.

* The 55th was one of a scant few Union regiments that lost more men in combat than it did to sickness and accidents. Further, during its entire period of service the 55th received less than 50 recruits. This means that all regimental casualties were original enlistees.

Henry Kays was born 1/14/36. The place of his birth was Abington Knox County, IL.

Not long after civil war erupted in American Henry answered his country's call to arms, departed his parents' farm, and enlisted in the U.S. Army infantry. At enlistment we gain a look at Henry Kays the physical man. He was five feet ten and one half inches tall, had dark hair, blue eyes and a florid complexion. Occupationally he was noted as being a farmer.

Private Henry Kays served for three years in Company "K" of the 55th Illinois Infantry. In late 1864 he was joined in the same company and regiment by older brother, James. Without accessing their military service records all we can really say about their respective periods of enlistment is that both survived The War.

Likely when Henry returned to civilian life he did so on his parents' farm in Abington, IL. That was where the U.S. Census for 1870 found him. He was still farming in Abington in 1880.

There is no census data for 1890 because most of that population tally was destroyed by fire. Further, there has been no census finding on Henry in 1900.

Henry Kays died 10/30/06 in Renton King County, WA. Details of his death are not available.

What had drawn Henry the Puget Sound region of the Pacific Northwest and exactly when he had arrived here are unknowns. According to his last will and testament, however, it appears he had at least one brother living in Eastern Washington and several nieces residing in the Seattle King County area. Henry had never married or produced children of his own.

* During the American Civil War James W. Kays served in the same company and regiment as Henry. 'He enlisted on 11/19/64 and was a 1st Lieutenant and Captain in Company "K" of the 55th Illinois Infantry. He survived the conflict.

** During the American Civil War James W. Kays served as a private in Company "B" of the 77th Illinois Infantry. He survived the conflict.

*** During the American Civil War Andrew Jackson Kays served as an Unassigned private in the 89thIllinois Infantry. He did not survive the conflict. He died on 7/4/64 in Chattanooga Hamilton County, TN.