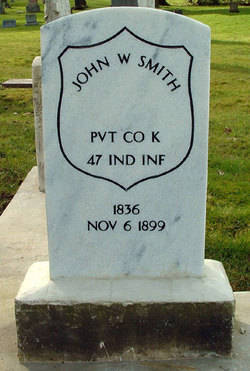 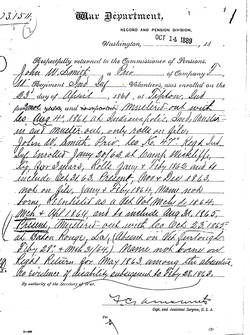 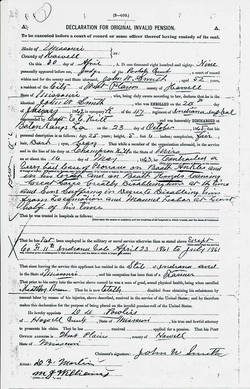 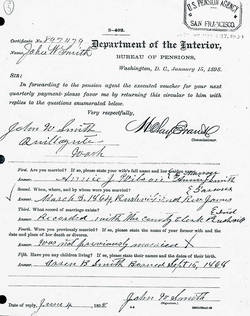 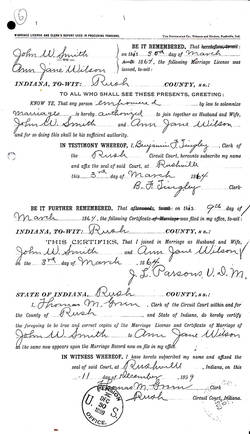 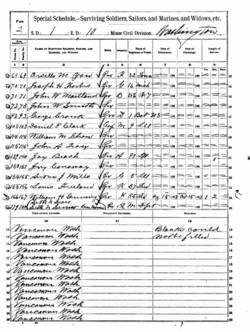 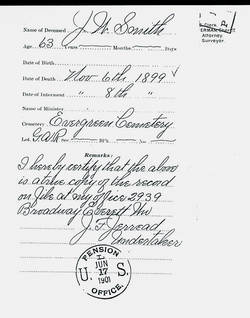 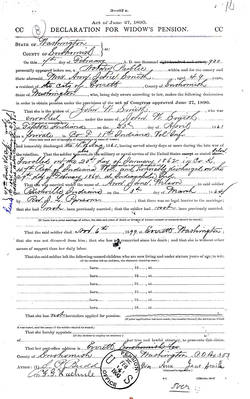 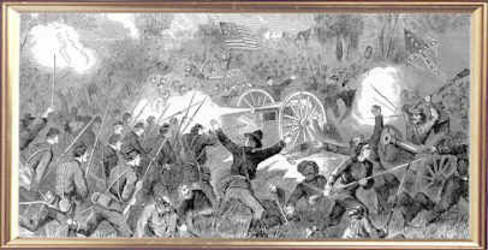 The 11th, a 3 month regiment was, almost immediately after Federal Muster, transferred to Evansville for blockade duty along the Ohio River.  A somewhat dramatic event occurred the day the regiment left for the front.  The patriotic women of Indianapolis presented it with a handsome stand of colors.  When received by Col. Lewis Wallace (Later on Gen Wallace who, post war, wrote the novel Ben Hur) received it he turned to the men and said in his most impressive tone “Now remember Buena Vista, boys, and on our knees let us swear to defend this flag with the last drop of our blood.”  Every man in the regiment, including Wallace himself, dropped to his knees and the Colonel repeated the following oath: “We pledge ourselves before God and these our fellow-countrymen, to defend this flag with our lives, and to die for it if necessary, God being our helper, Amen.”  A solemn “Amen” came in on breath from the regiment.

Ordered to Virginia, on 6/11 the unit arrived at Romney and attacked the town, but the main body of the enemy had fled.  While encamped at Cumberland, 13 mounted scouts of the 11th attacked 41 of the enemy routing them, and killing 8.  The 13 were then attacked by a larger party of rebels, but fell back to a secure position and held until dark.  In July the regiment reached Martinsburg, then was sent to Bunker hill and Harper’s Ferry.  Final muster came shortly thereafter.  A three year incarnation of the 11th was then formed and served until the end of the war.

[NOTE:  John W. Smith biographical profile was originally created circa 2010. With the availability of more web-based family data, it was revised and rewritten in January of 2018.}

Although available documents do not provide an exact year of birth, a preponderance of evidence points to John W. Smith having been born in 1836..  No birth date or month has been found. The location was the state of South Carolina.

John was the eldest of twelve children born to Zadoch “Thomas” (b. 7/27/12 or ‘13 NC) and Candace (nee Snow b. 4/1/14 Surry Co., NC) Smith. The Smith family, at the time of the 1850 U.S. Census,, was residing in or near the Thompson County, NC community of Surry. In 1860 the Smith’s were attached to the same community which, by that date, had apparently been redistricted into Nixons County.

Beyond his farm family background there is no information at hand pertaining to John’s childhood, formative or teenaged years.  Also, there is no notation regarding his occupation at the time the 5’6”, fair complexioned, gray-eyed Smith entered the U.S. Army.  Likely, he was a farmer as that was his post war occupation. Although when and why John moved there is not documented, as evidenced by the military organizations in which he served, by 1861, in his early to mid- 20s he was residing in the State Of Indiana.

Private Smith’s initial period of enlistment appears to have been without trauma as there are no recorded incidents of wounding or serious illness.  Such was not the case during his second, much longer period of service.  In later years Smith would petition the U.S. Government for a disability pension based on his claiming that while in the employ of the U.S. Government, at Champion Hill, MS he contracted the skin disease psoriasis on both ankles, in his crotch and on both hands.  The disease, at the time, caused great sores and, in later years, prevented him from performing manual labor “one half the time.”  Based on whatever grounds, the pension request was granted and Mr. Smith received a small monthly stipend until his death.  Skin problems aside, it appears private Smith viewed his time with the 47th as not unduly harsh or burdensome as, following expiration of his initial period of enlistment, he reenlisted as a veteran volunteer and thus received a furlough from 2/28 to 3/31/64.

It was on 3/3/64, while on his reenlistment furlough that, in Rush County near Rushville, IN John married Anne Jane Wilson (b. 1846 IN).  When and where the two had met is not known.

The Rebellion quelled and military service behind him, John Smith returned to Indiana and his wife.  The union would produce three children, the names of only two of which are documented. One was son Oren/Oran Beher Smith who was born on September 15th 1868. The other, daughter Amelia A. Smith, joined the family in 1873.

Oren/ Oran’s birthplace may have been Indianapolis in Marion County as that was where the Census of 1870 found the Smiths with John earning a living as a cigar maker. As for Amelia,  available record do not indicate her birthplace as by 1880 when the next census was compiled the Smith’s were living in Dyer Dist.11, Tennessee. Whether she was born before or after the move southward is not known.  The 1880 census is the only one which mentions Amelia, so she must have died young.

Sometime during the1890’s the Smiths removed from Tennessee to Missouri. On 4/89 they were residents of the Harviell Co. town of West Plains.  As was the case earlier, exactly when and why the move was made is not documented.  Perhaps it was prompted by the lure of new farmland.

John had one more move in his lifetime. That was to Everett, Snohomish County, Washington. It’s an old refrain, but when and why they moved to the Puget Sound region of the Pacific Northwest is not known.

Former Civil War infantry Private John W. Smith died 11/6/99 in Everett, WA.  It appears his death may have been the result of an accident in a smelter located in nearby Snohomish, Snohomish County, WA where he was employed.  At passing he was 63 years of age. He was/is buried at Evergreen Cemetery.

As earlier mentioned, at some point,- post Civil War -  John applied for an was granted a U.S. Government disability pension based on ailments and illnesses which, likely, he traced back to his soldiering days. When such a stipend was granted and its dollar amount are not known, but   after John’s death his widow continued to receive $8 per month from the government.  The payments ceased on 10/25/01 when Anne in, Everett Snohomish County, WA remarried.

In 1910 farmer Gallup, Annie and her son Oren/Oran were living in District 20, Lake County, Florida. A decade later Philo and Annie were in Sequim Clallam Co., WA. There Mr. Gallup was employed as a janitor in a local “lodge.”

Anne died on 9/6/29 in Sequim, WA. She was/is buried in the Sequim View Cemetery.