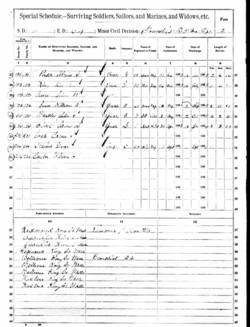 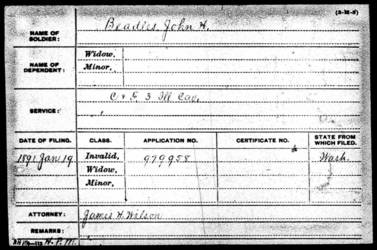 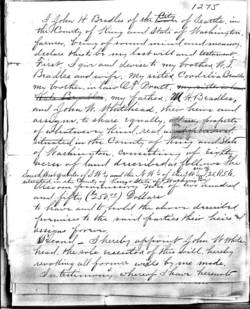 The 3rd Illinois, a twelve company cavalry regiment, was composed of companies recruited in various localities within the state. Company "C" was from Cass County, The organization served in the western theater of the American Civil War. It left the state on 9/25/1861 and moved to St. Louis, MO.

In February, 1862 the regiment went into camp about eight miles from Springfield, MO. When the enemy was located just four miles from there, the unit fought and won its first combat engagement.  A few days later the 3rd participated in cavalry charge at Sugar Creek, AR (2/17/1862) which routed the Rebel forces. Next came the battle of Pea Ridge/Elkhorn Tavern (3/6 - 8/1862). During this engagement the 3rd lost ten killed and forty wounded.

July, 1862 saw the 3rd march to Helena, AR. The regiment's supply line having been cut and the surrounding countryside laid waste by the enemy; the unit reached its destination only after ten days of hard fighting, starving and famishing for water.

Next came moves toward Vicksburg, MS with Union Gen. W.T. Sherman. Arriving at Chickasaw Bayou, at the end of December, 1862, the 3rd did good service during the disastrous attack on Haynes' Bluff.

During July, 1864 a large portion of the 3rd reenlisted as veteran volunteers. Thirty day furloughs preceded the August repulse of Confederate Gen N. B. Forrest's troops during their daring raid on Memphis, TN.

In January, 1865 the 3rd Consolidated camped in Alabama. It then moved back into Mississippi before, in May, returning to St. Louis, MO. From there it went to Minnesota and the Dakotas on an Indian expedition before returning to Ft. Snelling, St. Paul, MN. From there it travelled to Springfield, IL for final muster.

On 8/19/1861 John enlisted in the U.S. Army. His regiment was the 3rd Illinois Cavalry. Upon that enlistment we catch a glimpse of John Beadles the physical being. He was 5'8" in height, had dark hair, hazel eyes and a dark complexion. Occupationally he listed himself as "farmer."

Without accessing Private Beadle’s military service records not much can be documented about his tour of duty other than he survived his three year enlistment. He then re-enlisted as a veteran volunteer on 3/31/1864 in Germantown, TN. Additionally, he rose from the rank of private to that of corporal. Finally, the 8/24/1864 consolidation of the 3rd prompted Private/Corporal Beadles' transfer from Company "C" to Company "F". Corporal Beadles was mustered back into civilian life on 10/10/1865.

Although not as yet documented, it appears that John returned to his now-widower father's Illinois home. Where that may have been in 1865 we do not know, but in 1870 Madison was carpentering in Virginia Cass County, IL.

As of the 1880 U.S. Census John was residing and employed as a laborer in St. Albans Hancock County, IL. However sometime after that date, but before May, 1889 he quitted Illinois for the Pacific Northwest. When he arrived here and what had drawn him to the Puget Sound region of Washington Territory are unknowns. That having been said, he  may have had a married brother and sister already residing in the region who may have alerted him to  the availability of homestead farming land in the area that he could acquire because of his  Civil War soldiering.

On 5/20/1889 John was farming in the Houghton area of Washington Territory's King County. Houghton, located east of Seattle across Lake Washington is located just north of Bellevue. Now a neighborhood of south Kirkland, in 1889 Houghton was a stand-alone rural community. Based on available documentation, in Houghton, John had apparently been living on and working eighty acres of farmland for a number of years because on 9/27/1889 he acquired the "patent" (deed) to the land parcel.

The 1890 Civil War Veteran Schedule (census) noted that Houghton/Bellevue resident John Beadles was suffering from bronchial problems which apparently dated back to his soldiering days. It was likely this condition that, on 1/19/1891 motivated former trooper John Beadles to begin the paperwork necessary to be granted a U.S. Government disability pension. The effort was too little and too late.

Around the same time he applied for the pension John also drew up his last will and testament.  Having never married or sired children, he bequeathed his worldly assets - namely his homestead valued at $250 - to his married brother and his wife, his married sister and her husband, his father and an unidentified man named John W.  Whitehead.