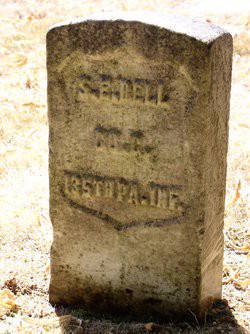 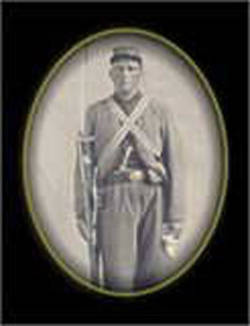 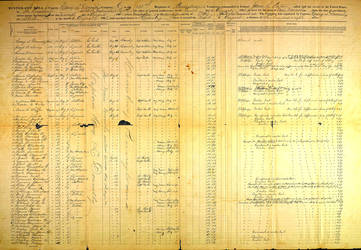 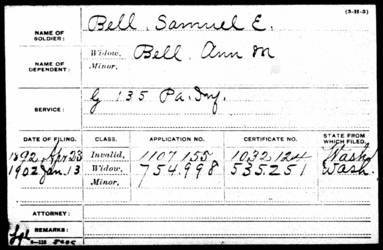 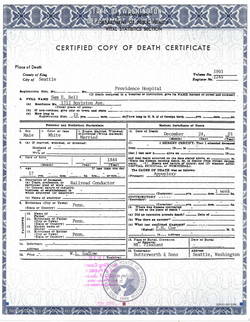 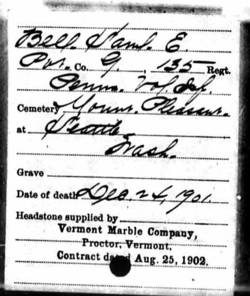 The 135th Pennsylvania was a nine month, eastern theater infantry regiment. It was composed of men from the Pennsylvania counties of Lancaster, Indiana, Westmoreland and Jefferson.

Mustered into Federal service during the first half of 1862 the 135th left the state for Washington City on 8/19/1862. In the District of Columbia it remained on provost (military police) guard duty that the capitol and in nearby Georgetown until 2/16/63.

Moving to Belle Plain, VA in February, 1863 the regiment returned to guard and picket duties until the opening of the Chancellorsville campaign. At that time it moved to Pollock's Mills below Fredericksburg and supported Union artillery batteries posted along the Rappahannock River. During this period three men of the regiment were wounded.

During the battle of Chancellorsville (4/30 - 5/6/1863) the 135th it was not actively engaged with the enemy. At the expiration of its term of enlistment the regiment returned to Harrisburg for final muster and discharge.

Samuel Elder Bell was born on 1/15/1844. Although at least one U.S. Census claims he was born in Maryland, the location of Samuel’s birth was Addison Somerset County, PA.

In 1862 Samuel left his father's and step mother's farm and joined the U.S. Army. He unit was the nine month 135th Pennsylvania Infantry. Here it should be added that it is highly probably that one or more of his brothers may have also served in the military, but with common surname like Bell, lacking family or other confirmation of their service it is almost impossible to confirm or disprove their actions. . As for Samuel, without accessing his military service records all we can really say about his enlistment is that he survived and returned to civilian life.

Where Samuel settled after leaving the army is an unknown. In 1870, however, he living in Latrobe Westmoreland County, PA and working as a laborer. He was also a husband and a father.

Samuel had married in 1867. His bride was Anne Matilda Keffer. Anne - the name also appears as Ann and Anna - had been born on 4/10/1847 in Ligonier Westmoreland County, PA. Seeing that Samuel's parents and he were residing in Ligonier at least by 1860, likely Samuel and Anne knew one another as youths.

In the 1910 U.S. Census Anne claimed she had given birth to six children, five of whom were then living. However, census and family sources indicate the couple produced as many as thirteen sons and daughters.

As noted by the birth state of the Bell children, all were Pennsylvania born. Further, likely all were birthed in Westmoreland County.

After marrying, it appears that Samuel and Anne first settled in Ligonier where they had spent at least some of their teenaged years. Most of their child producing/ child rearing years were then spent in the community of Latrobe which is also located in Westmoreland County.

In 1880 when the Bells were residing in or near the Westmoreland County community of Latrobe Samuel had left farming and laboring behind and was working for the Pennsylvania Railroad as a pass (ticket) conductor.  Later, at the dawn of the twentieth century he was employed as a conductor but on a different railroad three thousand miles west of Pennsylvania.

Dropping back a bit, at some point in time prior to 1892 the Bell family quitted Pennsylvania and moved westward to the Pacific Northwest. Here they settled in Seattle King County, WA. What had drawn them to the Puget Sound region and exactly when they arrived here are unknowns.

On 4/23/1892 Samuel submitted paperwork to obtain a U.S. Government disability pension based on his days of Civil War soldiering. While we know a pension was granted, without accessing his files the onset date and the amount of his monthly stipend remain questions to be answered at a later time.

Samuel Elder Bell died in his 1712 Boyleston Avenue Seattle home. The date of his passing was 12/24/1901. The cause of his death is not known. Also not known is whether his death was expected or sudden. He was only fifty seven years of age.

Burial of Samuel's remains was/is in Seattle's Mt. Pleasant Cemetery located on that city's Queen Anne Hill. A military headstone was later acquired and added to his gravesite. To this day it stands guard over the former soldier's final resting place.

On 1/13/1902 Ann petitioned the U.S. Government to continue receiving a portion of her late husband's pension stipend. The request was granted but, again, the details of her monthly allotment are not known.

After Samuel's death Ann Matilda Keffer Bell lived out her years in Seattle. And, she had many of those years still ahead of her.

* There is another local vet also in this regt. Find name and add here.