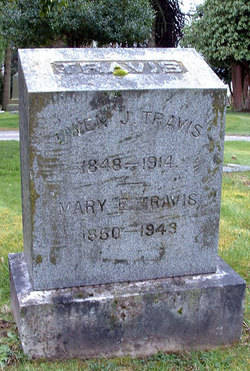 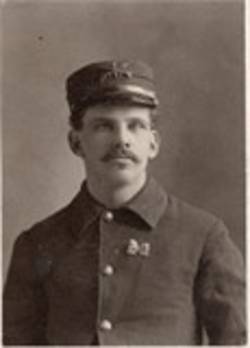 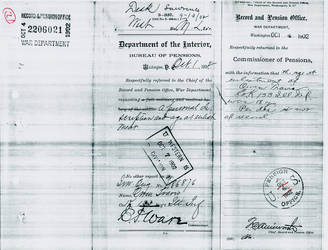 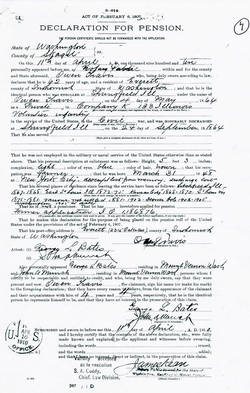 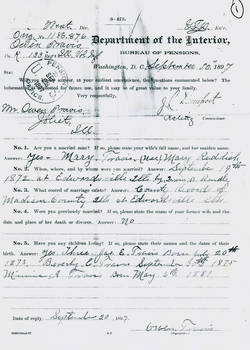 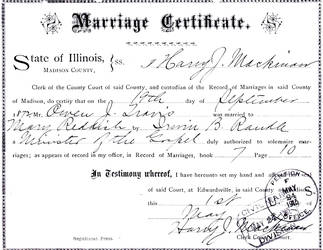 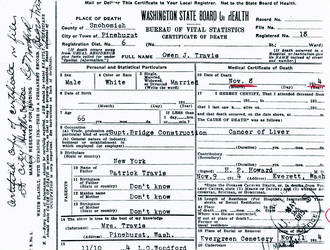 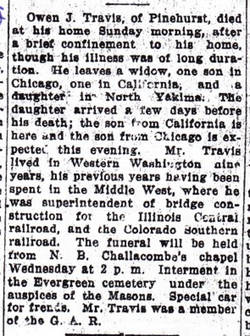 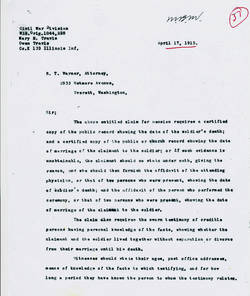 In May, 1864, Union forces commanded by Gen. U.S. Grant began moving southward in a push that, one year later, would bring an end to four years of bloody civil war. In order to supply as many seasoned troops to this effort as possible, forces were pulled from garrison and guard-duty assignments and placed in the field. To fill the void this transfer created a number of short-term regiments were raised and placed in rear-echelon positions. The 133rd Illinois was one such regiment.

Raised for a period of 100 days, the 133rd never left the State of Illinois. Its only assignment was to guard Confederate prisoners of war being held at the Rock Island barracks located in Rock Island, IL, a government owned island located in the Mississippi River between Davenport, Iowa and Rock Island/Moline, IL. Despite never entering combat, during its brief period of existence the regiment lost 16 enlisted men from disease, accidents, etc.

No documentation exists to confirm Owen Travis' date of birth, however, his mother, whose name is not known, reportedly told him he was born 3/31/48 in New York City, NY. His father's name was Patrick. Nothing more is known about his birth family other than that he left home at twelve years of age after which he never saw his mother again and his father only once.

In May, 1864 teenaged Owen enlisted in the U.S. Army. His enrollment at this late date in The War likely included a sizeable bonus or "bounty." Although his "100 day" regiment saw no combat, around 6/15 while guarding Rebel prisoners at Rock Island, IL the young private was stricken with rheumatism and piles (hemorrhoids) both of which would, in later years result in his receiving a U.S. Government disability pension. . The only other notation in Private Travis' service file is that from 9/20 - 9/26 he was treated for an un-noted reason after which he was returned to duty.

Army life behind him, Owen apparently returned to Illinois. Exactly where he settled, however, is not known. What is documented is that sometime in 1868 he moved from Illinois to Kansas City, MO. Whether the move was made from Dawson or Litchfield, IL is not clear. Also, not clear is how long he remained in Kansas City before moving to East St. Louis, MO. One indication is the move was made in 1870, while another points to 1872.

It appears that the Travis' departed East St. Louis for St. Louis MO circa 1875. The 1880 census and later documents provide some insight into the family's moves up to this time and beyond as it noted that Owen was involved in the construction of railroad bridges, an occupation which necessitated moving from one job site to another once a project was completed. In 1880 his position was listed as "bridge inspector."

Sometime during 1881 the Travis family departed St. Louis, MO for a new home in Springfield, IL. From that year until 1902, in one pension document Owen, by his own admission, said that this period was very unsettled with many of their moves being recalled from memory and therefore not totally date specific. With that in mind, as best as can be determined, both from his recollection and available documents, the families next move was in 1885 when they moved from Springfield, IL to Marshalltown, Iowa. They then remained in Iowa until 1889 when they moved to Chicago, IL.

The next documentation of the Travis family whereabouts comes from 1897. Interestingly in a form penned on 12/15 of that year Owen noted that he had resided in Joliet, IL since leaving the military. Perhaps Joliet was kind of a de facto "home base" for him and his family. Whatever the case, in that same document he reported he had been a railroad worker who was now totally disabled and was therefore requesting a U.S. government pension based on ailments, etc. which he traced back to his Civil War soldering. The request was rejected.

The 1900 census placed Owen, Mary and children Beverly and Minnie in Chicago, IL. Owen's occupation was listed as "bridge superintendent. Two years later, in February of 1902 he again sought to obtain a pension based on being incapacitated by piles (hemorrhoids), constipation, rheumatism and catarrh (infection of the sinuses, etc.). In late October of that year a medical affidavit recommended he be granted a pension of $6 per month because of his rheumatism and piles. During this same month his occupation was again noted as being "bridge builder."

After the government pension was recommended, during the final month of '02 Owen ran into an interesting roadblock: For over 30 years he had been going by the name Owen J. Travis, while his birth name and that on his military service records was Owen Travis. As a result he had to explain to pension officials that he had adopted the middle initial J. only because he wanted a middle initial!! As the year drew to a close the family moved anew, this time from Chicago to Denver, Colorado.

Owen and Mary remained in Denver until 1905/'06 when they moved for a final time. On this occasion their settling point was in the City of Everett in Snohomish County, WA where, in 1910 their address was chronicled as 2135 Oakes Avenue. In April of that same year his pension either commenced or was increased to $10 per month.

During the l912 calendar year there is additional conflicting pension data. One source from July notes Owen, who was now residing in Pinehurst, Snohomish County, WA, an area near the community of Lowell on the southeastern edge of the City Of Everett, received a pension stipend increase to $12 per month, while another from early September in Joliet, IL indicated a pension request was rejected and abandoned.

Owen and Mary continued to live in Pinehurst until his death on November the 8th, 1914 at the age of 66 years. The cause was listed as liver cancer. His occupation was listed as "superintendent of bridge construction." Other information from the time noted he was receiving a U.S. government pension of $15 per month and was survived by his wife and three children. Burial was in Everett's Evergreen Cemetery.

In March, 1915 Mary petitioned the U.S. Government to continue receiving at least a portion of her late husband's Civil War-based disability pension. The attorney she hired to assist her in this process was Robert Warner, himself a Civil War veteran who is buried in nearby Snohomish, Washington's Grand Army of The Republic Cemetery. The application process was successful, so on 8/7/15 she was admitted into the pension system.

Mary continued to reside in Pinehurst during her final years which proved to be lengthy. Sometime between 1930 and 1943 she removed to Bellevue, King county, WA probable to live with a child. She lived to the ripe old age of 93 and died at Bellevue, King Co. WA on September 8, 1943. At her passing she was receiving a $40 per month widow's pension. She was buried in Evergreen Cemetery beside Owen.