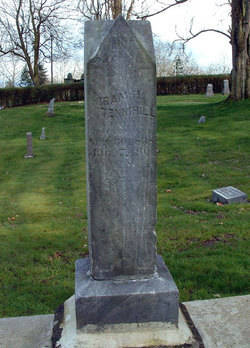 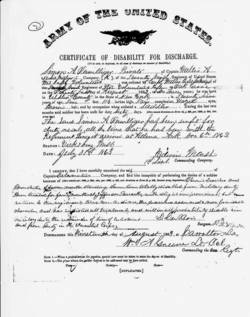 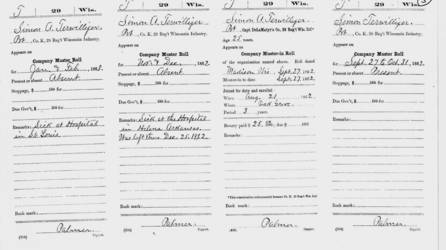 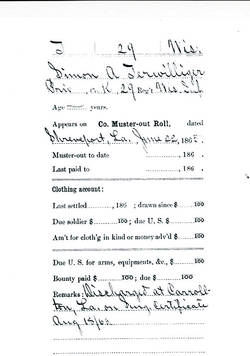 The 29th, a three year western theater regiment, left Wisconsin in early November, 1862.  Upon reaching a point on the east bank of the Mississippi River, part of the regiment joined an expedition into the interior, performed picket duty and participated in other excursions into going into winter camp in late December.

In January, ’63 400 of the unit marched to Devil’s Bluff, AR where it captured artillery, arms and stores.  February found it in the Yazoo Pass expedition while in March it was involved in its first battle at Port Gibson, MS.  Fighting like veterans the 29th lost 71 killed and wounded.  Next came “Champion’s Hill, MS” where the regiment made a bayonet charge across an open filed and carried a timbered position held by the enemy.

Although 300 prisoners were taken, the 29th lost 114 killed and wounded.  The siege of Vicksburg, MS was followed by the 2nd battle of Jackson.  Expedition, guard and picket duty then filled the summer and fall.

After this came the Texas Expedition which saved a Union division from annihilation at Carrion Crow Bayou.  Before med ’64 there were the battles of Cloutierville, Sabine Crossroads and a “severe skirmish” at Atchafalaya River.  Assignments in Louisiana and Arken preceded heavy fatigue and picket duty which capped the year.

In January, the 29th went to Kennersville near New Orleans, LA.  It then moved against Ft. Blakely outside Mobile and was present at that city’s capitulation.  Provost (military police) duty around Mobile preceded final muster.

Simon Alsdorf Terwilliger was born February 24, 1837. The location of his birth was New Hurley Ulster County, NY. He was baptized on June 30, 1837 in New Hurley.

As best as can be determined from the limited census available, Simon had at least one older sister and two older brothers. Those Terwilliger children were: Jane A. (b. 1828 NY), Alexander (b. 1830 N Y) and Aaron (b. 1831 NY). It is not known if he had younger siblings.

In late August, 1862 the 5’ 11 ½ “fair complexioned Simon who listed his occupation as “saddler”, enlisted in the U.S. Army.  The experience was to prove a medical disaster.  In December his company muster roll noted him “absent, sick at hospital at Helena, AR.  Was left there 12/25/621.”  Merry Christmas!

Private Terwilliger was in and out of hospitals in the months that followed.  A doctor writing in a 1/31/63 certificate of discharge noted, “The said Simon Terwilliger has been unfit for duty all the time that he has been with the regiment since it arrived at Helena, Ark. Nov. 6th, 1862.”  The writing continued: “Chronic diarrhea and bronchitis of 7 months standing, sometimes totally disabled from military duty.  Been treated four months at Jefferson Barracks (St. Louis, MO) with slight improvement; but returned to the regiment 3 months since the diarrhea assumed more formable character… has resisted all treatments and will in all probability disable him (from) military duty the remainder of time of enlistment.”  The doctor concluded with the notation, “(unfit for duty) in the Invalid Corps.” * Private Terwilliger was thus granted a medical discharge.

Military service behind him, Simon apparently returned to Wisconsin and leather work.  He next turned up in the 1870 U.S. Census in Sparta, Monroe County, There, he was residing in the home one Henry Foster who owned a harness making shop. Foster was married to a woman named Cornelia who, apparently, was a relative of Simon. Mr. Foster was teaching saddler Simon to also become a harness maker.

The next we learn of Simon he is residing in a Seattle King County, WT rooming house located in that city’s downtown area on the corner of Third and Jefferson streets. .. What had drawn him to the Puget Sound region of the Pacific Northwest and when he had arrived here are unknowns. In Seattle he was employed applying his harness making skills. Seattle city directories for 1889 and 1890 also found him making harnesses in that city.

1903. A new century. By that year Simon had moved northward from Seattle to the city of Everett located in Snohomish County. The city directory for that city once more noted that his occupation was “harness maker.”

Simon A. Terwilliger died 4/15/03 in Everett, WA.  His obituary read, in part, as follows: “Simon Terwilliger, harness maker for Ogrosk & Hosletter, died suddenly this morning at the latter’s’ place of business (located at 2009 Hewitt Avenue.  He had risen for the day and begun work, but laid down again after complaining of not feeling well… he died a few minutes later…. Mr. Terwilliger had been ill with the grip (respiratory infection- perhaps tracing back to his days of Civil War Soldiering) for several weeks although he went to work most of that time.

He has no relatives in Everett and roomed in the rear of the harness shop… it is supposed that heart disease caused his death… the funeral will either be in charge of the Grand Army Of The Republic or Masons, to both of which the deceased belonged.” At death Simon was approximately 64 years of age.

Simon, who lived in the back of the harness shop where he died, had never married or sired children. He did, however, have a will which converted what meager estate he may have had into cash which was to be awarded to his two brothers, Alexander and Aaron and his late sister’s son, William Masten.