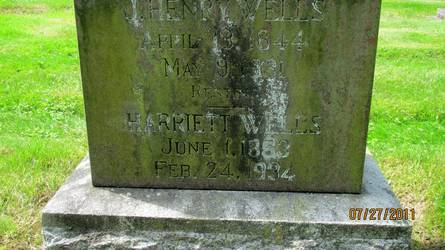 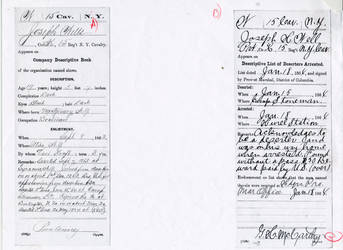 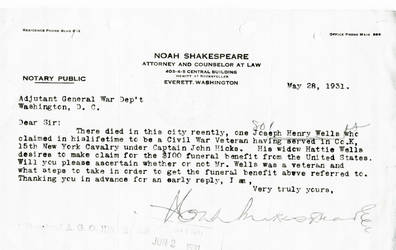 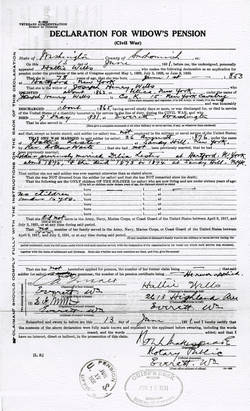 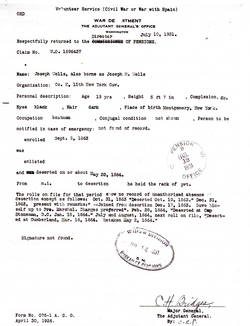 The 15th, a three year eastern theater cavalry regiment, was organized around the remnants of the 12th NY Infantry which had been mustered out because of completion of its period of service. It left the state in detachments between the first of September, 1863 and January, 1864. The regiment was first assigned to the Department of Washington, but was quickly transferred to the Army of West Virginia. Within the latter organization it would be engaged at Hillsboro, Strasburg, Upperville, Franklin, Romney, Morehead, Luray Gap, Mt. Jackson, Front Royal, Newtown, Woodstock, Piedmont, Staunton, Waynesboro,  Lexington, New London, Diamond Hill, Lynchburg, Salem, Bunker Hill, Bolivar Heights, Leetown, Martinsburg, Snicker's Gap, Kernstown, Ashby's Gap, Winchester and Charlestown all of which were located in Virginia.

Returning to the Army of The Potomac the 15th took part in the Appomattox campaign being engaged at Dinwiddie Ct. House, Five Forks, Petersburg, Deep Creek, Jetersville, Sailor's Creek and Appomattox Station.

Joseph Henry Wells was born 4/13/44 in Montgomery County, NY. His parents were Joseph (b. 1814 NY or Canada) and Mercy Ann (no nee, b. 1819 NY) Wells. He was the eldest of the Wells children. While one source indicates there were six children, U.S. Census records point to their being seven.

In the U.S. Census of 1850 the Wells family - Mercy and children Mary, Joseph, Emily and William - were residing in or near the community of Amsterdam, Montgomery County, NY. Interestingly, the head of the household was not Joseph, Sr. Instead; the Wells' were in the home of one William and Emily Hynds and their family.

While the whereabouts of Joseph, Sr. is not known for 1850, as of 1860 when the Wells family was censussed in Johnston, Fulton Co., NY, he was back as the family patriarch. His occupation at that time was noted as "day laborer."

Young Joseph is next documented when, on 9/8/63, in Utica, New York, he enlisted as a private in the U.S. Cavalry for a period of three years. At enlistment his vital statistics were listed as follows: Age 19; Height '7"; Complexion dark; Eyes black; Hair dark. His occupation was noted as "boatman." For enrolling he apparently earned a $100 bonus or "bounty", $25 of which was likely paid up front with the balance to come in later increments.

Private Wells relationship with the U.S. Army military went awry from the very beginning as, either on 10/1 or 10/10, he deserted his new company and regiment. His name next turned up on an 11/28 Ft. Columbus, Governors Island, NY, list of deserters arrested by the provost marshal (military police). Apparently Private Wells surrendered himself to the authorities. For the apprehension the arresting officer claimed a $30 bonus. Likely the fee would come from Private Wells' $13 per month salary or remaining bounty/bonus monies.

Young Private Wells was returned to his company and regiment via Camp Stoneman, Washington, D.C.  The return date was 12/17/63. Upon that return a charge of desertion was filed against him. According to the charge specification on or about 10/1/63 Private Wells did absent himself while at Syracuse, NY and was absent until apprehended about  at Schenectady, NY. The disposition of that charge is not present in available documents, but most likely there was a finding of guilt and a penalty assessment.

From there matters did not improve. For whatever reason, by 1/15/64 Private Wells was again at Camp Stoneman in Washington, D.C. instead of D.C.'s new Camp Distribution where he was supposed to be.  He had deserted his unit and flag for a second time and headed for home. Again, he either turned himself in to authorities or was arrested by provost marshal for not having a pass authorizing his unit absence. The apprehension date was 1/18/64.

In a rerun of earlier events, Private Wells was once more reunited with his company and regiment. On this occasion the reunion apparently came on 3/20/64 at Burlington, West VA. It did not last for long..........

On 5/20/64 Woodstock, VA Private Wells deserted for a third, and final, time. On this occasion it appears he took with him $32.45 worth of U.S. Government ordinance items plus $30.33 worth of horse equipage. While records are unclear on the matter, this last assessment likely included the horse itself. This was Private Wells' last contact with the U.S. Army.

Where Joseph went and what he did for a living immediately following his desertion and after the war was ended is not known. His next sighting is from 1870 when he reportedly married to Cordelia Lester (b. 1844 NY).The Lester’s were a Hartford, Washington County, NY family. No details are available pertaining to the union other than the wedding was held in Hartford.

The marriage of Joseph and Cordelia was not a long one as Cordelia died 1/23/76 in Sandy Hill, Washington County, NY. As with the marriage itself, no details are available pertaining to Mrs. Wells' death.

The union of Joseph and Hattie would produce one child which was noted as "not living" in the 1900 census for Washington County, NY. In that same tally Joseph's occupation was listed as "landlord." Available documents are silent on the Joseph and Hattie from that census back to their wedding date.

1910. Another decade. Another census. By the time of that tally the Wells had quitted New York for the Puget Sound City of Everett, located in Snohomish County, Washington. What had drawn the couple from the east coast to the west coast is not documented. No occupational information is listed for Joseph.

In 1920 Joseph and Hattie were still in Everett. Again, no occupational category is given for Joseph. Hattie was listed as "nurse for private family."

The census tally for 1930 would prove to be the last for Joseph. That survey found he and Hattie in Everett. On this occasion he was occupationally noted as "retired."

Joseph Henry Wells died in Everett, Snohomish County, Washington. The date was 5/10/31. At his passing the old Civil War trooper was 86.11years of age. Burial was on 5/12/31 in Everett's Evergreen Cemetery under the name Henry Wells. The local Grand Army Of The Republic post played a role in the internment.

After Joseph's death Hattie petitioned the Federal Government in an attempt to obtain a $100 burial stipend. Because of Private Wells' less than stellar service record that petition was denied.

Harriett "Hattie" Wells died in Everett on 2/24/34. She was buried in Evergreen Cemetery beside Joseph.