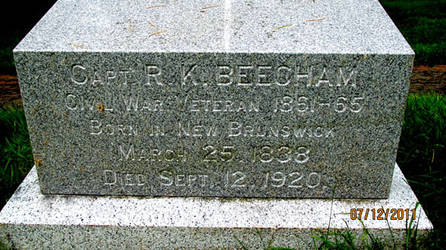 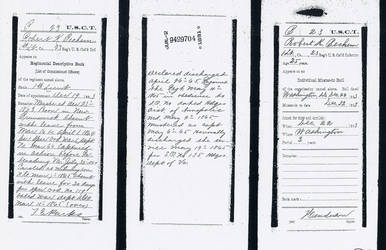 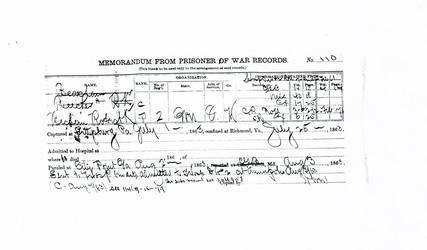 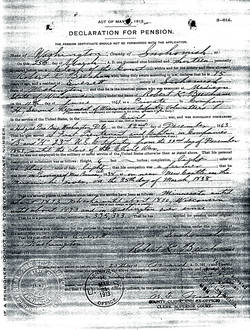 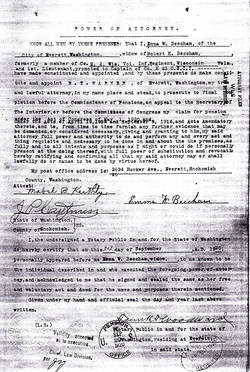 *NOTE: This is same regiment and company as Rasselas Davison (Block 30 Grave 647)

Leaving WI in 6/61, the 2nd, an eastern unit, was the first three year regiment to appear in Washington, DC.  It saw first action when it engaged the enemy at Blackburn’s Ford, VA.  At the first Battle of Bull Run it bore the brunt of an attack by Thomas J. “Stonewall” Jackson’s entire division and lost 30 killed, 125 wounded and 65 missing.  Engagements fought by the 2nd during 1862 included South Mtn. and Antietam, MD and Fredricksburg, VA.  1863 found the unit at Chancellorsville, VA and Gettysburg, PA.  As one of five regiments who comprised the famous “Iron Brigade” within the Army of the Potomac whose broad brimmed, black hats became synonymous with stubborn, gallant fighting, the 2nd’s losses were greater in proportion to numbers of any regiment in the American Civil War.  As such, by 5/11/64 the unit was so the unit was so decimated that it was permanently detached from the brigade and employed as provost guards (military police).  In 7/64, after original enlistees were sent home, remaining members of the 2nd were organized into a 2 company battalion which was, again, primarily assigned provost duty.  Still, it took part in the advance upon and assault on Petersburg, VA and, later, fought at Hatcher’s Run.  On 11/30/64 the 2 companies were transferred to the 6th WI Infantry where they remained until final muster.

U.S. President Abraham Lincoln initially resisted arming African Americans to help put down The Rebellion.  Later, however, that view changed and following issuance of the Emancipation Proclamation in 1/63 the government actively recruited black soldiers.  Ultimately fielded were 145 regiments of infantry, 7 of cavalry, 12 of heavy artillery, 1 of light artillery and 1 of engineers.  With the exception of a small number of non-commissioned and all commissioned officers assigned to these units were white.  Following organization and federal muster the 23rd, from April to September, 1864, was attached to the 2nd brigade, 4th division, 9th corps, Army of the Potomac.  Composed of many former slaves the 23rd was considered an “experiment” and a political “hot potato” because it was feared the black soldiers might be massacred by the Rebels.  As such, the regiment was assigned rear echelon, non-combat roles.  All that changed on 5/15/64 as the Army of The Potomac edged south from Spottsylvania, VA.  A federal cavalry unit was surprised and overrun by the enemy and sent out a call for help.  The 23rd, assigned to guard the Army’s wagon train, was the closest available unit and, a thousand strong, responded to the call for assistance.  It subsequently swung the balance in the engagement which occurred on the Aldrich farm near Pinney Church.  A union trooper described the regiment’s arrival on the scene: “It did us good to see the long lines of glittering bayonets, although those who bore them were Blacks, and as they came nearer they were greeted by loud cheers.” (To the North Anna River by Gordon Rhea, 2000 pge. 106)  Six weeks later, on 7/30/64 before Petersburg, VA the 23rd took parting the abortive assault on the Confederate works that was to become known as the Battle of “The Mine” or The Crater.”  The 23rd was next assigned to the 2nd Brigade, 3rd division 9th corps where it remained until 12/64.  That December it was attached to the 3rd brigade, 3rd division, 25 corps.  Finally, it served in the 3rd brigade, 1st division, 25 corps and Dept. of Texas until final muster.

Robert K. Beecham was born 3/25/38 near New Castle in what was later to become the Province of New Brunswick, Canada.  When he was approximately seven years of age his parents moved the family to Sun Prairie, WI where he grew to manhood.  As a member of the 2nd Wisconsin, Private Beecham saw more than his fair share of combat.  Actions in 1861 include Blackburn’s Ford and First Bull Run.

1862, however, was primarily characterized by his moving in and out of hospitals for a variety of ills.  Released from a convalescent camp near Alexandria, VA in mid-September he tried, on foot, to catch up with is unit which was on its way to Antietam, MD.  He did not succeed as, along the way he ate pilfered green corn, green apples and potatoes which, once again landed him in the hospital.  In spite of his absences, in Jan/Feb., 1863 Robert was promoted to corporal.

Of primary significance during his tenure with the 2nd and the Iron Brigade was the fierce stand it made against enemy forces 7/1/63 during the first day of fighting at Gettysburg, PA.  The brigade, including the 2nd was ultimately forced to fall back from Cemetery Ridge. Corporal Beecham was captured by Confederate forces.  Transported to and confined in Richmond, VA, in late July he was paroled north and, again, hospitalized.

As 1863 drew to a close corporal Beecham applied for and received a 1st lieutenant’s commission in one of the new regiments of U.S. Colored Troops being formed.  He joined his new regiment, the 23rd U.S.C.T. in early, 1864.  In mid May, 1864 the 23rd received its baptism of fire near Aldrich’s Farm, VA.  At the end of July it was in the thick of the fighting during the mine explosion before Petersburg.  During this action Lt. Beecham was wounded in the right thigh/genitals and taken captive within the enemy works.  Imprisoned at Camp Asylum, NC, he was not freed until March, 1865.  Although Lt. Beecham was subsequently promoted to captain (effective 8/64), his military career was, for all practical purposes, over.

With his health broken by months of imprisonment and the war at an end, Captain Beecham resigned his commission and returned to Wisconsin.  In later years when he applied for and received a U.S. Government disability pension based on his Civil War soldiering, despite is exemplary period of volunteer service and rise in rank, he was granted a stipend which, at the outset amounted to only $8.62 ½ per month.

Although the former soldier spent a great deal of time and effort in his later years attempting to increase the amount, his pleas fell on deaf ears. Even though he pointed out that he was physically healthy when he was accepted as an officer in the 23rd and his health problems stemmed from his time of imprisonment, government officials considered his ailments to have begun when he was a private/corporal with the 2nd.

In March, 1864 while a member of the 23rd, Lieutenant Beecham requested and was granted a 30 day furlough to return home as he had not been there since he’d enlisted in 1861.  Additionally, he wanted to visit his ailing mother whom, he felt, might not live much longer.

After the war the Beecham’s remained in WI for a few months before removing to Litchfield, MN.  They remained there well into the 1870s, a time during which on two occasions Robert operated a farm until his failing health would not allow such strenuous work.  He also tried his hand at carpentry, but again, found himself physically handicapped.  Surveying, teaching and raising vegetables were other endeavors he undertook to earn a living.  He even studied law.

In 1879 the Beecham’s moved again, this time to NE where they remained until finally, in 1886 when they again went back to WI.  On this occasion the family stayed there until 4/94 when they moved to Everett, WA.  Why the move was made it’s not documented.

In Everett Robert became well known for his civic ideals which helped move the city from the wilderness to the modern community it is today.  He was employed as an insurance agent, lawyer, street commissioner and newspaper man, but his greatest prominence came through his writings of poetry and philosophy.

His last job, a sixteen year stint as a Supreme Court bailiff, came to an end when his eyesight and general health began to fail.  Robert Beecham, Civil War soldier extraordinaire, died 9/12/20 at the age of 82.5 years.  After her husband’s passing Emma applied for and received, commencing on 10/6/21, $30 per month of his pension.  Emma died in December, 1927 and is buried beside Robert.