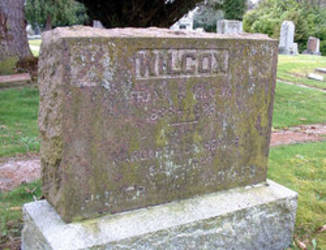 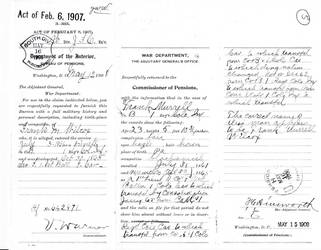 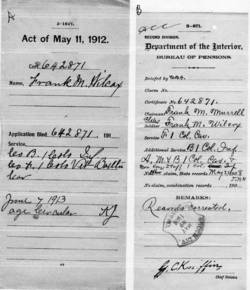 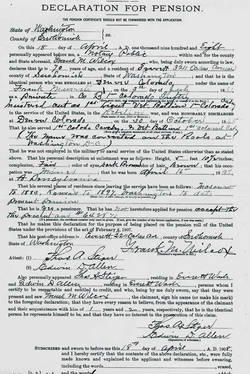 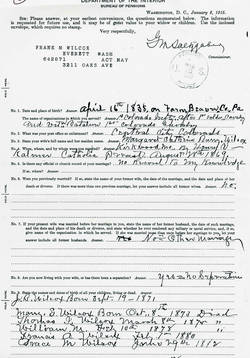 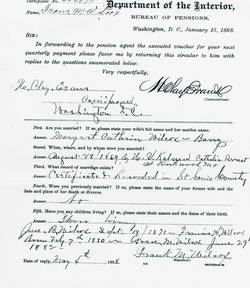 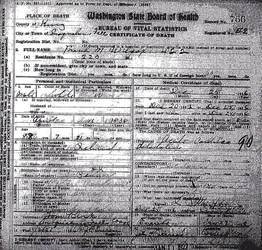 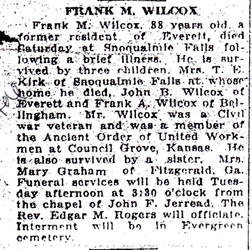 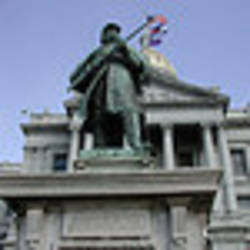 *NOTE:  Service was under Frank Murrell

The 1st Colorado was truly a three-year "western" regiment. Roots of the unit trace to the summer of 1861 when the patriotic people of Colorado Territory offered to furnish the U.S. War Dept. with several companies of infantry or cavalry composed of "men inured to toil and hardship." Federal authorities curtly refused the offer.

Undaunted by the snub from Washington, during the summer and early winter of '61 ten companies were raised and mustered in as the 1st Colorado (State) Infantry. (One additional company was added in 1862, a final, in 1863.)

As initiated, personnel of the regiment were considered to be of unusually high order, being hard and well seasoned, self-reliant and accustomed to danger, but lacking in military experience. Even so, in late fall, 1861, three companies were sent to garrison Ft. Wise/Lyon and on 2/10/62 the rest of the regiment was ordered to New Mexico. En route they learned of the Union defeat at Valverde and loss of all field guns from Ft. Craig to Confederate forces. Upon receiving this news the 1st hurried their march to Ft. Union by frequently covering 40 miles per day and, during one 36 hour period, 92 miles.

Arriving at Ft. Union on 3/10, shortly thereafter 418 of the regiment moved to Pigeon's farm where, from captured Rebels, they learned of the northward movement of Confederate forces into La Glorietta Pass en route to Ft. Union. The 1st next surprised and captured the Rebel's advance scouting party at the western end of Apache Canon and, moving further into the canon confronted and bested the vanguard of the enemy party. The Apache Canon confrontation behind them, two columns of Federals moved through the canon toward the main Confederate body located at La Glorietta Pass. While this movement was underway, a detachment of Federals took a trail over the mountains which led them to the farm of a man named Johnson where they surprised, captured and destroyed the entire Rebel wagon train depriving him of his baggage, ammunition and provisions. Meanwhile, the now-united Federal columns engaged the enemy at Pigeon's Ranch and after two days of fighting routed the enemy and sent him trudging back southward toward Texas. The battle of La Glorietta was over.

Without benefit of their destroyed wagon train, the Confederate retreat across the arid southwest almost proved fatal to the already demoralized Confederates.  Rebel forces would never again threaten the southwest.

Late in 1862 the Colonel of the 1st travelled to Washington, D.C. for the purpose of having the regiment made a cavalry organization and, if possible, transferred east to the Army of The Potomac.  That November or December he succeeded in having the 1st transferred to the cavalry and also secured an order returning it from New Mexico to Colorado He failed, however, in his effort to move the command eastward to one of the main theaters of war.

Beginning in 1/63 units of the 1st began to filter back to Colorado where they were mounted. The regiment continued service in Colorado and adjacent territories during the remainder of the war, but never again confronted Johnny Reb. Instead, detached companies rendered efficient service against hostile Indians.  These campaigns  included  engagements at Cedar Bluffs, Smokey Hill, Fremont's Orchard, Atkin's Ranch, Pawnee Fork, Big Sandy, Valley Station and Little Lermio, to name but a few. Final muster came in October, 1865.

PERSONAL/FAMILY HISTORY:
Although differing dates, years and places of birth exist, Francis or perhaps Franklin “Frank” Murrell Wilcox likely was born on April 16, 1838 in Beaver County, Pennsylvania.  The only notation pertaining to his parentage is on an illegible copy of his death certificate. No data is present relevant to possible siblings.

First documental information available on young Wilcox comes from November 17, 1854 when, in Pittsburg, PA, one Francis Murrell, a 5’8-3/8”, black-eyed, brown hair, fair-complexioned laborer enlisted in the U.S. Regular Army for a period of five years. His subsequent assignment was to Co. “I” of the 7th U.S. Infantry.  Although  military service records from the time list Francis’  age as being 21 years , accepting the April, 16, 1838 birth date as being accurate,  he was only sixteen years and seven months of age.

Serving in the southwest, the only incident of note to come out of this youthful military stint was a charge of sleeping at his position on 8/2/57 while a member of the guard assigned to sentinel duty at Ft. Belknap, Texas. For this incident a general court marshal panel was assembled at Camp Cooper, at San Antonio, Department of Texas on January 9, 1858. Available records are not clear as to whether or not Private Murrell was held prisoner in the local stockade prior to the court marshal.

Captain, later during the American Civil War general, George Stoneman of the 2nd U.S. Cavalry presided over the proceedings which found Private Murrell guilty as charged. Despite defense witnesses which testified to his good character and his being a good soldier, etc., the young soldier was “sentenced to six months hard labor in charge of the guard and to forfeit six dollars of his monthly pay for the same time.”  Private Murrell was honorably discharged from the army in 1859.

Exactly where Frank settled after initially leaving the regulars is not documented.  However, by his own testimony he was in Colorado (Territory) by sometime in 1860.

Civil war came to America in April, 1861. Not long after, in July of that year, “Frank” Murrell, in the Territory of Colorado, enlisted in the U.S. volunteer infantry.  His vital statistics at enrollment were as follows: 23 years of age, 5’ 10 ¾” in height, complexion fair and eyes hazel/brown.  One source notes his occupation at the time as “miner”, while a government document pointed to him being a “blacksmith.”

Entering the volunteers as a man with prior military experience Frank Murrell appears to have quickly moved up in rank. His first promotion was apparently from private to the status of a non-commissioned officer, likely a corporal or sergeant. From there he obtained a commission to be come a Second Lieutenant and, by the time of final discharge, that of a First Lieutenant. All this upward movement was taking place while the 1st Colorado Infantry became the 1st Colorado Cavalry and, finally, the 1st Battalion Veteran Colorado Cavalry as the unit moved through a change of fighting focus and consolidation as the War ground to an end. Accompanying these alterations in regimental focus and personal rank change was his movement from one company to another

Once again, as during his initial period of military service, soldier Murrell’s conduct was not without flaw as on January l, 1863 while serving as officer of the day at Camp Colorado near Colorado City (Denver), Colorado Territory 2nd Lieutenant Murrell  got into an argument with a fellow officer in his regiment, that being a 1st Lieutenant Wilson. Murrell, who had been drinking intoxicating liquor, then challenged Lieutenant Wilson to a fight using “sabers, pistols or shotguns.” Lieutenant Wilson had Murrell relieved from duty and arrested.  Again, records are not clear regarding whether or not he was incarcerated at that time pending court marshal.

As best as can be determined the findings of the court marshal panel did not find Lieutenant Murrell guilty of behavior unbecoming to an officer and a gentlemen or violation of one of the 45th Article of War, but did, however, find him guilty of “Conduct prejudicial to good order and military discipline”.  For this he was sentenced to “forfeit pay and all emoluments for a period of two (2) months, but shall not cease to do duty with his regiment for that period or any part of it.” It appears that sentence was later vacated because the original allegations had been founded under the wrong Article of War. 2nd Lieutenant Frank Murrell therefore “resumed his sword” and returned to duty. That matter behind him, 2nd Lieutenant Murrell was promoted to 1st Lieutenant before being mustered out of service.

After his 1865 military discharge, once again nothing is known about Frank Murrell/Wilcox until 8/28/69 when, in Kirkwood, Missouri, he married Margaret Catherine "Kate" Berry (b. ca. 1843/'44 NY). The following year's U.S. Census placed the couple in Independence, Duncan Co., MO where Frank was employed as a grocer.

The 1870 census placed the Wilcox’s in Independence, MO, while a decade later they were in St. Louis. April, 1881 found the family in   Kansas and '97 had them moving further westward to Washington State. Why the constant westward moves is not known.

The 1900 census showed Frank, Margaret, John, Francs and Grace in Everett, Snohomish County, Washington. Frank was employed as a night watchman. (residence 1908: 321 Oakes ave.) Ten years later Frank, who now was apparently retired, Margaret and an individual identified only as "brother-in-law" were still living in Everett. At that time Margaret indicated she had born six children, three of whom were still living.  Another decade found only Frank and Margaret in their household which was located next door to son John and family.

In late 1925 Franklin and Margaret were residing in the eastern King County, Washington community of Snoqualmie Falls with son Thomas. On 12/25/25 after four days of being under a doctor's care Franklin suddenly died.  Cause of his   passing was noted as "heart debility." At death the old soldier was 88.7 years of age.

Franklin’s obituary in the Everett Herald indicated he was survived by three sons: Thomas of Snoqualmie Falls, WA in whose home he died, John B. of Everett, WA and Frank A. of Bellingham, WA. Also still living was his sister Mary in Georgia. Interestingly, his wife, Margaret, is not mentioned even though she lived until 1/14/27 when she also died in Snoqualmie Falls. Apparently she had continued to reside with Thomas after her husband's passing. At the time of her death she was receiving a $65 per month U.S. Government stipend based on her late husband's Civil War soldiering. Franklin and Margaret are buried side-by-side n Everett's Evergreen Cemetery.