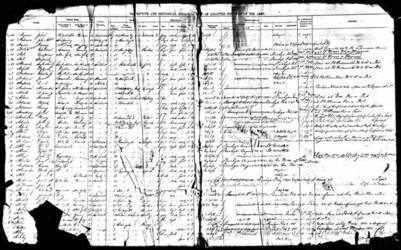 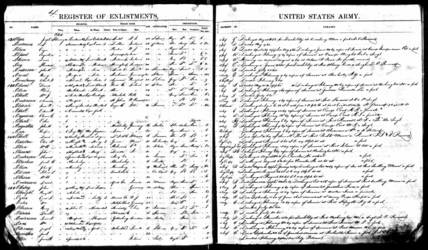 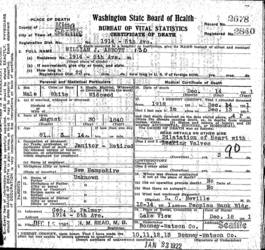 The 2nd U.S. Army Regular Infantry Regiment which served during the American Civil War (ACW) and exists to the present day traces it ancestral roots to 4/12/1808, but on 5/17/1815 it was reconstituted when the 6th, 16th, 22nd, 23rd and 32nd U.S. infantry regiments - all located in upper New York State - were combined. The newly created organization was dubbed the 2nd United States Infantry.

During the ACW the 2nd fought at the early battle of Wilson's Creek, MO (8/10/1861) before moving eastward where it became part of the Army Of The Potomac.

By 6/1864 the number of enlisted men in the 2nd had dwindled to less than one hundred. Those men were then transferred to Company "C" which was given a full compilment of commissioned and non- commissioned officers. Until 12/1864 the entire regiment consisted of that one company. The regimental organization throughout the remainder of The War is unknown.

On 4/18/1869 the 2nd was consolidated with the 16th U.S. Infantry. The new organization was named for the 2nd. It is that unit which traces its history to the present day.

* The 2nd was one of a scant few regular or volunteer army regiments which lost more men in combat than by disease or other causes.

Roots of the 2nd United States Cavalry regiment trace back to 5/23/1836 when President Andrew Jackson named a regiment of heavily armed horsemen the 2nd Regiment of Dragoons. Prior to that date there was only one such organization.

Before the American Civil War (ACW) the 2nd saw service in the Second Seminole War (1836/'37) and the Mexican-American War (1846/'47). During the 1850s it served against Native American hostiles along what was then America's western frontier and in Utah.

Upon the onset of the American Civil War (ACW) in April, 1861, the 2nd Dragoons were called east. There, on 8/3/1861 it was renamed the 2nd Cavalry Regiment. For much of the 1861/'65 ACW the 2nd was a key part of either the "Reserve Brigade" or the "Regular Brigade of the Cavalry Corps within the Army Of The Potomac.

On 3/17/1863 at Kelly's Ford, VA the 2nd became the first Union cavalry unit to engage the forces of Confed. Gen. J.E.B. Stuart in a head-to-head charge. This action hurt Stuart's reputation. Another incident involving the 2nd during early 1863 was Stoneman's Raid prior to the battle of Chancellorsville, VA (4/30 - 5/6). The raid is regarded as displaying the "resurgence of the Union Cavalry." Mid-year found the unit dismounted and delaying Confederate forces at Gettysburg, PA (7/1 -7/3).

During the 1864 battle of Trevilian Station, VA (6/11 - 12) the 2nd charged Rebel cavalry and smashed their lines. In a 10/1864 clash with Confederates, the 2nd attacked their flanks forcing them to retreat.

The ACW having ended in April/May, 1865, the 2nd moved to the mid-western plains, there, the unit participated in the Indian Wars before marching into the twentieth century.

The only documentation about William's parents is that his father was reportedly born in New Hampshire. His mother was said to have been birthed in New York.

There is no documentation pertaining to William possibly having brothers and sisters. Finally, according to the 1850 U.S. Census for Epsom Merrimack County, NH, by age ten he was residing with a farming family with the surname Goss.

Jumping ahead ten years, no 1860 census information has been found pertaining to William. In 1861, however, he seems to have been in the area of Boston, MA as that was when and where he enlisted in 2nd U.S. Regular Army Infantry.

Although military records are not available, it appears Private Abbott successfully completed his initial three year period of enlistment and, in February, 1864 re-enlisted. His re-enlistment however was with the 2nd U.S. Regular Army Cavalry rather than the infantry.

At the time of his re-enlistment we get a glimpse of Private Abbott the physical being. He was 6' 3/4" tall, had gray eyes, brown hair and a fair complexion.

We know nothing about Private Abbott's wartime cavalry experience. But, with the shooting war ended, in July, 1865, he deserted from his unit.

William Abbott's whereabouts remain an unknown for approximately the next forty years. There is some information that he first came to Seattle King County, WA in 1898, but at the dawn of the twentieth century Civil War researcher Denise Otteson found him in Lewis County, WA. One notation from 1900 placed him in the community of Cosmopolis while the U.S. Census has him residing in Chehalis with one John Unger who was the head (lead) laborer in a local saw mill. According to the census, William was boss of the mill's stable.

1910. Another decade. Another U.S. Census. That population tally placed William back in Seattle King County, WA. As best as can be determined at that time he was living with Chester and Margueritte White by whom he was employed as a servant and "Coachman."

In 1920 William was still in Seattle. At that time he was boarding with a family whose last name was Palmer. His occupation - at the age of 79 - was "janitor."

* Boston, MA is a guesstimate based on the fact that William's 1861 enlistment was credited to that city.