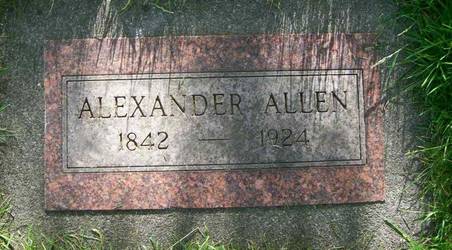 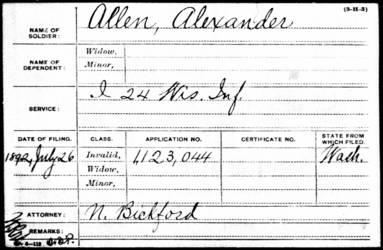 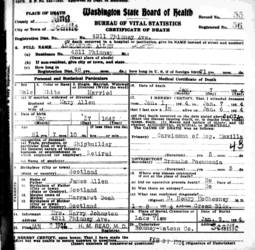 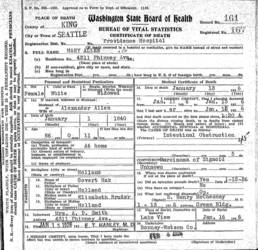 The 24th Wisconsin, also known as the "Milwaukee Regiment" was a three year infantry organization. It fought in the western theater of the American Civil War (ACW).

Leaving the state on 9/5/1862 the 24th travelled into Kentucky. There, the unit saw its first action at Perryville (10/7/1862). During that conflict it "behaved with coolness and deliberation" and fought "with the steadiness of veterans."

*The 24th was one of a scant few Federal infantry regiments that lost more enlisted men and officers in combat than it did to disease, accidents, etc.

Alexander Allen was born Alexander MacGeachie/McGeachie on 5/2/1842. The location of his birth was Dundonald, Ayr, Scotland.

As best as can be determined Alexander was the second of three sons born to James and Margaret. Older than he was Marion (b. 1841 Scotland). Younger than he was James (b. 1845).

In 1847/'48, two or three years (or less) after the death of his father, Alexander accompanied his aunt Mary (nee MacGeachie/McGeachie) Allen and her husband, Robert Allen when they immigrated to America. In this country he adopted the Allen surname as his own. **

By 1862 Alexander was residing in Milwaukee, WI. On 8/15 of that year he enlisted in and was mustered into the 24th Wisconsin Infantry.  The following day, 8/16/1862, also in Milwaukee, he married.

For whatever reason, military life, war or both did not set well with Corporal Allen. Perhaps, though, he missed his new wife. His enlistment was to have been for three years, but Corporal Allen did not even serve for three months. He deserted from the 24th Wisconsin on 11/6/1862.

Looking at the birth locations of the Allen children, at some point - perhaps immediately after his desertion - Alexander and Mary left the U.S. and moved into Canada. It was there that their first two children were birthed. The War was over, by 1867 when James was born, the family had returned to the Milwaukee area.

The Allens then remained in Milwaukee through the births of Alexander John (1869), Jennie (1872) and Robert (12/1873). Then, at some point in time prior to the birth of Alice (9/1877) they quitted Wisconsin and moved westward to the Puget Sound region of Washington Territory (WT).

What had drawn the Allens to the Pacific Northwest is not known for certain, but it may have been the timber industry. It appears, once here they may have first settled in Kitsap County's Port Madison, a mill town on Bainbridge Island. That was where Alice was born.

Having moved again between 9/1877 and the U.S. Census of 1880, that population tally found the Allen family residing in Seattle King County, WT. At that time Alexander claimed his occupation was "ship builder" and, a year later, "ship carpenter."

On 7/26/1892, while in Washington State, Alexander applied for a U.S. Government disability pension based on his days of Civil War soldiering. Likely because of his "deserter" status the request was not granted.

Alexander Allen lived out his years in Seattle. The last of those years appear to have been in a home located at 4311 Phinney Avenue. According to the U.S. Census of 1920, residing in the same house with Alexander and Mary was married daughter Jennie, her husband Harry Johnson/Johnston and son Frederick. Interestingly, Mary is not noted.

Retired shipbuilder and Civil War cavalry trooper Alexander Allen died at the Phinney address on 1/7/1924. Cause of the old soldier's passing was "carcinoma of Maxilla" with bronchial pneumonia contributing. He was/is buried in Seattle's Lake View Cemetery located near the north end of that city's Capitol Hill.