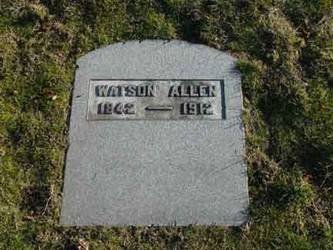 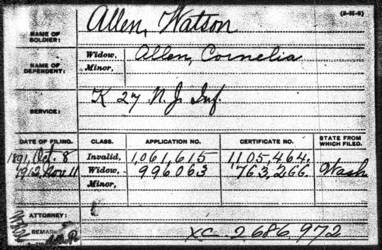 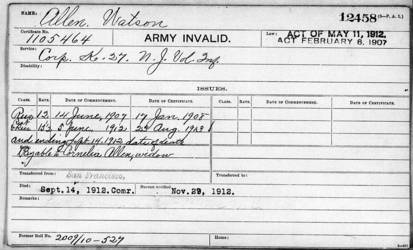 The 27th New Jersey was a nine month infantry regiment. It spent the majority of its enlistment period in the eastern theater of the American Civil War.

Raised from the recruitment quotas of Morris and Sussex counties, the organization rendezvoused at Camp Frelinghuysen near Newark, NJ. Its recruits were largely men from the state's agricultural districts.

On 10/9/1862 the regiment departed New Jersey and travelled to Washington City. There, it was assigned to a camp on East Capitol Hill.

12/10/1862. That evening after a march of much hardship the 27th reported for duty within Federal lines near Fredericksburg, VA. Although the regiment was not brought into close and actual conflict. Throughout its term of service, during the battle of Fredericksburg (12/11 - 15/1862) it was sufficiently exposed to the enemy to test the unit’s bravery and trustworthiness.

After Fredericksburg, in early 1863, the 27th moved into Kentucky. Later, at the time of Confederate General R.E. Lee's invasion of the north, it marched to Pennsylvania.

The regiment remained in the field long after its enlistment term had expired. It was mustered out of Federal service on 7/2/1863 while the battle of Gettysburg, PA (7/1 - 4/1863) was raging.

Watson Allen was born 8/29/1842. His place of birth was within the state of New Jersey.

In 1850 Samuel and family were concussed in Bryant Sussex County, NJ. No census data has been found for 1860.

As best as can be determined Samuel and Mahala produced four children. Watson was the eldest and the only male child of the four. His younger siblings were Marietta Allen (b. 1845 NJ), Eveline Allen (b. 1846 NJ) and Elisabeth E. Allen (b. 1849 NJ).

During September, 1862 Watson went off to war. His regiment was the 27th New Jersey infantry. Without accessing his service records about all that can be said regarding his period of enlistment is that he entered the military with the rank of corporal and, having survived The War, exited with the same.

Returning home to New Jersey Watson married. His bride was Anna Garphelia (nee King). She had been born during the year 1847 in the state of New York. The two were wed on an as yet undocumented date in July, 1865.

Noting the birth states of the Allen children, after Lena was born the Allens quitted New Jersey in favor of the Pacific Northwest's Washington Territory (WT). What had drawn them here is not known. Their arrival year was apparently 1872.

In the Puget Sound region, Watson and family settled in King County. As of 1879 his occupation was "farmer," but the U.S. Census for 1880 noted "saw mill." The mill - which he had established - was located east of Lake Sammamish in eastern King County, likely near the town of Snoqualmie as that community was listed as Watson's residence in 1880.

In 1881 Watson served as a representative in the Washington territorial legislature. Details of this service are not available.

On 11/30/1883 in Thurston County, WT Watson remarried.  The second Mrs. Watson Allen, Cornelia, (nee Newton) was born 7/10/1851 in Akron Summit County, OH. Around 1873 she had moved to Washington with her parents. She worked as school teacher in Chehalis, WT until she married Watson and resettled in Seattle.

On 10/8/1891 Watson Allen applied for a U.S. Government disability pension based on his days of Civil War soldiering. A stipend was granted, but without access to pension files the basis for the claim, the amount of the payments and when they commenced are unknowns. On 6/14/07, however, the pension certificate was reissued and, at that time, the monthly payment was twelve dollars. That amount grew to fifteen dollars and fifty cents on 6/5/1912.

Residence-wise, in 1900, at the dawn of the twentieth century, the Allens were living in the King County community of Monohon.

As of 1901 Watson was back into politics. That year he served as an elected member of the Washington State House of Representatives. Information pertaining to his legislative district is not available.

Watson died on 9/14/1912 in Oakville, Grays Harbor County, WA. Details of his passing are not available. Burial was/is in the Lakeview Cemetery located on north end of Seattle's Capitol Hill.

After Watson's death Cornelia remained in Seattle. One of the first things she did after her husband's passing was petition the U.S. Government to continue receiving at least a portion of his Civil War - based pension. That request was granted, but again, without pension files, details of her stipend remain unknown.

* Some of the data presented courtesy Denise Ottoson or Mark Snyder

** Monohon was a mill town located on the southeast shore of Lake Sammamish in eastern King County. It burned on 6/26/1925.