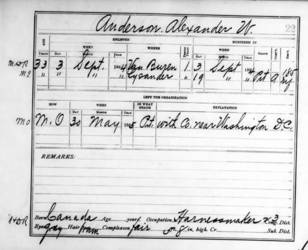 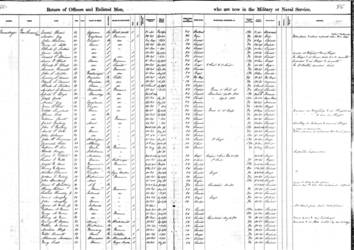 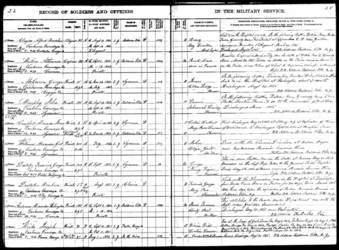 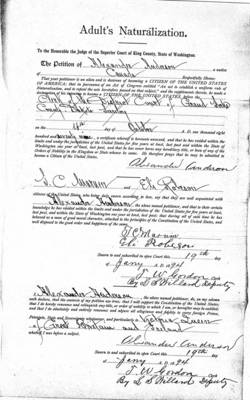 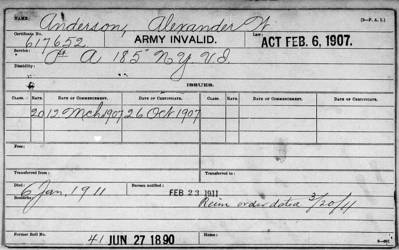 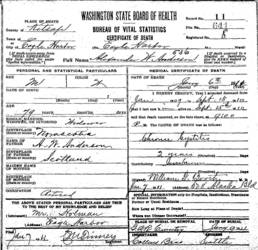 In December the regiment participated in the Hicksford raid during which six men were captured. It was next engaged during the second battle of Hatcher's Run (2/5 - 7/1865). There, it lost sixteen men killed, wounded and missing. Finally, came the Appomattox campaign which found the 185th fighting at Quaker Road, Gravelly Run, Five Forks (4/1/1865) and Appomattox Court House (4/9/1865).

At Quaker Road a brilliant charge was successful although it cost the 185th two hundred three killed and wounded. A final, pathetic incident was the killing of Lieut. Hiram Clark in the final clash with the enemy at Appomattox Court House (4/9/1865).

Final muster and discharge was at the end of May in Washington, D.C.

It appears Alexander departed Canada for the U.S. sometime during the 1840s. By 1850, at eighteen years of age, he was residing in Cicero Onondaga County, NY with a harness maker named Samuel Northrop. Alexander, too, was learning the harness making trade.

In 1853 Alexander married. His bride was Caroline E. Warren. Caroline had been born sometime during March, 1831 in New York State.

During their years together Alexander and Caroline produced five children. Four of the five were living in 1900 and only those four are identified in available documentation. The four Anderson children were: Forest W. Anderson (b. 8/1858 or '59 Jefferson County, NY), Caroline "Carrie" Anderson (b. 1863 NY), Bella/Belle C. Anderson (b. 1868 WI) and Mary/Mae E. Anderson (b. 1870 WI).

After marrying, Alexander and Caroline settled in Cicero Onondaga County, NY. In that community during both 1855 and 1860 Alexander was working as a harness maker. As of September, 1864, however, although the couple was still in Onondaga County, they had removed from Cicero to the community of Van Buren.

On 9/3/1864 Alexander left his then-pregnant wife and young son and joined the U.S. Army. Perhaps the one year enlistment was based upon the fear of being drafted for a longer period. Then again, it might have been financially motivated as by 1864 rather tidy enlistment bonuses or "bounties" were being paid to new enlistees. Beyond that it could have also been prompted by the prospects of receiving a thirteen dollar per month paycheck..

Despite the fact that Private Anderson's regiment - the 185th New York Infantry - was a "front line" combat unit and not a "rear echelon" organization, Alexander survived his enlistment. In part, this may have been because, as a harness maker by trade, he was assigned to the regimental quarter master's department and thus remained out of the front line trenches. Although military service records need to be obtained to clarify any trials and tribulations Alexander may have encountered while wearing a blue uniform, the fact remains that he survived his enlisted and returned home to his wife and growing family.

In 1865 Alexander came marching home to Van Buren.  Further, beyond returning to the civilian world Alexander also returned to harness making. Specifically, in 1865 he was making harnesses for the U.S. Army.

By 1870 Alexander and family had quitted New York and moved westward to Chicago (Ward 20) Cook County, IL. What had prompted the move and when it had been made are unknowns. In 1870 Alexander's job involved some kind of manufacturing.

The Andersons appear to have remained in Chicago until sometime after 1880 and before 1889. Alexander, employed as a laborer, and family were in Chicago during the 1880 census, but in 1889 - perhaps when Washington Territory gained statehood in November, Alexander - and apparently he, alone, was found in the Puget Sound region's Snohomish County. Here, he was employed as a logger.

Interestingly, according to one source, on 9/7/1889 in Kansas, Alexander applied for a U.S. Government disability pension based on his days of Civil War soldiering. This is somewhat puzzling because of the Kansas location of the application. As noted earlier, an '89 census for Snohomish County WT/WA placed Alexander residing there working as a logger.

As for his pension, we do know that at some point in time a stipend was awarded, but without accessing his pension files early details are not known. As of 1907, however, Alexander was in receipt of twenty dollars per month.

Alexander may have been by himself in the Pacific Northwest in 1889, but after that we don't have many clues as to his whereabouts for the next eleven years. Part of the reason is the 1890 U.S. Census - for the most part -was destroyed by fire. We do know, however that Alexander was in Seattle King County sometime during 1894 as that is when and where he became a naturalized U.S. Citizen.

1900. A new century, a new decade and a new census. By the dawn of the twentieth century Alexander had moved once again. He was then with his family farming in Springvale Logan County, OK.  Again, what had drawn them there and when they arrived are unknowns.

As of 1910 Alexander was back in the Puget Sound region of Washington State. The family had obviously arrived back in the northwest sometime earlier as Caroline died here on 12/23/09. Although details of her passing are not available, she likely died in the King County City of Seattle as she was buried in the Lakeview Cemetery located on the north end of the city's Capitol Hill.

And Alexander? In 1910, as a retired widower, he was residing in Eagle Harbor Kitsap County, WA. Under his roof were daughter Belle and son Forest.

Alexander Anderson died in Eagle Harbor, WA on 1/6/1911. At passing he was seventy nine, plus, years of age. Cause of the old soldier's death was listed on his death certificate as chronic cystitis of approximately two years duration.*