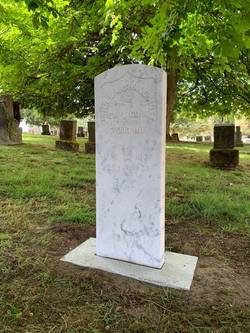 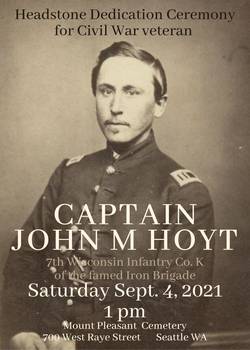 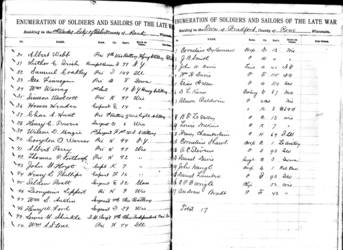 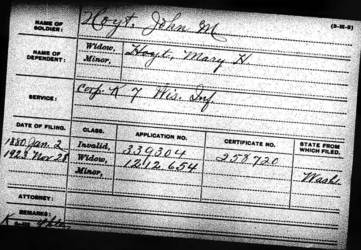 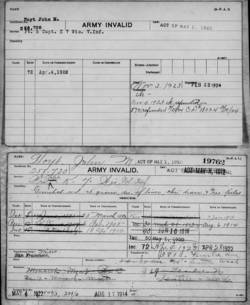 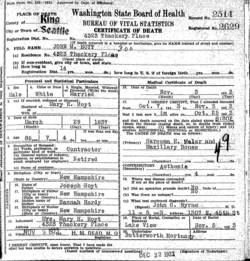 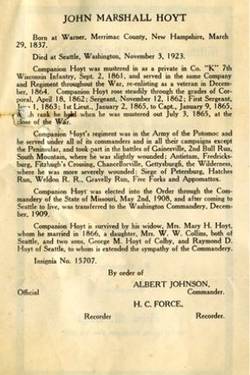 The 7th Wisconsin was a three year infantry regiment. It spent its service time in the eastern theater of the American Civil War (ACW).

Leaving Wisconsin on 9/21/1861 the regiment travelled to Washington, D.C. While there, it participated in various movements and expeditions during the winter of 1861/62.

In July, 1862 the 7th had its first skirmish with the enemy while on an expedition to destroy the Virginia Central Railroad. Still, during that movement the regiment suffered more from the weather's excessive heat than Rebel bullets.

The unit's first introduction to real warfare came at Gainesville, VA (8/27/1862). All the field officers of the regiment were wounded and forty five enlisted men were killed or mortally wounded. The following day it was present on the battlefield of Second Bull Run (8/28 - 30/1862). During two days of performing rear-guard duties during the Federal retreat the regiment lost five killed and one hundred thirty five wounded.

Engaged at South Mountain, MD (9/14/1862) twenty were killed and another one hundred eighty five wounded. Then came Antietam.

At Antietam, MD (9/17/1862) the 7th lost twenty killed and one hundred five wounded. The combat year was capped off at Fredericksburg, VA. There, the unit was not actively engaged.

Actions of 1863 began with the Chancellorsville, VA campaign (4/30 - 5/6). During this period the regiment lost four killed and five wounded.

In December the regiment veteranized. This led to the men being sent home for thirty day furloughs.

Returning to the field in the spring of 1864 the 7th joined Union Gen. U.S. Grant's Overland Campaign into Virginia. The regiment suffered severely during the battle of the Wilderness (5/5 - 7). Next came Spotsylvania (8/11 - 21). The list of those killed or died from wounds from 5/5 to 6/10 was ninety two killed and one hundred eight wounded.

1865. In February, at Dabney's Mill, the 7th lost four killed and nineteen wounded. It then took a prominent part in the battle of Five Forks (4/1) and joined the pursuit of the Rebels as they fled from Richmond, VA. It then assisted in the capture of the Army Of Northern Virginia at Appomattox Court House (4/9.).

The War ended, the 7th moved to Washington City where it participated in the May Grand Review. It was then ordered to Louisville, KY where it was mustered out and sent home to Wisconsin.

**** In the grand scheme of regimental losses during the ACW, the 7th was one of a scant few Federal units to lose more men in combat than it did to sickness and accidents.

John Marshall Hoyt was born 3/29/1837. The location of his birth was Warn Merrimack County, NH.

John Hoyt Sr. died in New Hampshire's Merrimack County on 6/5/1846. After the death of her husband Hannah, with her four children, remained in New Hampshire. The U.S. Census for 1850 found her there, farming in Sullivan County.

How long John remained under his mother's roof is not known. No definitive census data for 1860 has been located.

When John entered the U.S. Army during August, 1861, he was reportedly residing Allen's Grove, WI. There, he enlisted in the 7th Wisconsin Infantry.

Without accessing his military service records, however, information regarding John’s rise in the ranks remains sparse. From corporal he would move up to the rank of sergeant. Then came first sergeant and after that first lieutenant (12/21/1864). Finally, (12/29/1864) he was elevated to the rank of Captain in his Company "K".

John's success in the military was not without its hardships. On 9/14/1862 during the battle of South Mountain, MD he was wounded. He was wounded a second time on 5/5/1864 in Virginia during the battle of The Wilderness. Again, although his service records are not at hand, likely his receiving and surviving the unidentified wounds likely contributed to his meteoric rises in rank.

Available documentation points to John returning to Wisconsin after departing the army. Where he may have initially settled is an unknown, but on 11/1/1866 in Rock County, WI he married.

The new Mrs. John M. Hoyt was Mary Hesketh Wilson. Mary had been born sometime during the month of October in the year 1843. The place of her birth was within the state of New York.

After being wed it appears John and Mary Settled in Rock County, WI. In 1870 and into 1885, more specifically, their community of residence was Beloit Rock County, WI. 1870 shows John's occupation as "carpenter." There is no occupation noted in '85.

We do not know when the Hoyts quitted Wisconsin, but by the dawn of the twentieth century they had moved westward and were farming in Cascade County, MT. Their 1910 residential community was Kibbey. Ten years later, in 1910, it was Nason.

1920. Another decade. Another U.S. Census. That tally found the Hoyts in Seattle King County, WA. Again, what had drawn them to the Puget Sound region of the Pacific Northwest and exactly when they had arrived here are unknowns. Likely, though, the answer to the former is married children and grandchildren. The place of residence for the now retired "contractor" Hoyt and wife Mary was in the home of married daughter Marion, her husband and children.

The 1920 census was John's last. He died in Seattle, King County, WA at his daughter's home (4323 Thackery Place) on 11/3/1923. He was attended by a physician beginning on 10/7/1923. Authorities were notified of the old soldier's passing by his wife - now widow - Mary. Cause of the 86.6 year old's passing was documented as "Sarcoma of Right Malar and Maxillary Bones (bone cancer) with Asthenia (paralysis) contributing.

Dropping back some years, as early as 1/2/1880 John had filed paperwork to receive a U.S. Government disability pension based on physical conditions and ailments which traced back to his days of Civil War soldiering. At some point, perhaps in the 1880s, he began receiving a stipend based on him suffering from old gunshot wounds - one in the right groin - as well as disease of the liver, chronic diarrhea and piles (hemorrhoids).

By June of 1891 John's monthly cash receipt amounted to eight dollars. As years passed the stipend grew to where it appears to have been seventy two dollars per month at the time of his death.

After John died, on 11/28/1923 paperwork was initiated to allow the widowed Mary Hoyt to receive at least a portion of her late husband's pension. Unfortunately, it appears she died before the request was granted.

*Some of the information presented in this biographical profile is courtesy of Denise Ottoson.

*** Available documents are unclear as to whether John entered the army as a private or a corporal. According to an article written at the time of his death. John gained the rank of Corporal on 4/18/1862.