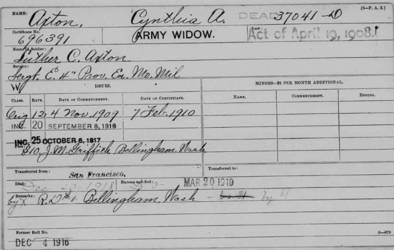 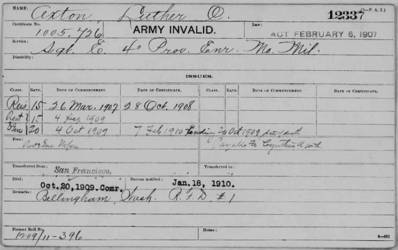 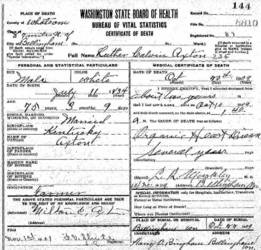 Mr. Axton was born in Kentucky in 1834 and was reared and educated in that state. On attaining mature years he moved to Missouri and eventually to Kansas. There he bought a farm, which he operated for a number of years, and he was also engaged in the hotel business. He served as a justice of the peace and was familiarly known as "Squire" Axton. In 1883 he came to Whatcom county, locating first in Bellingham, where, being a carpenter and contractor, he erected a number of the early buildings during the two years that he lived there. Among these was the home of the Reveille, the first newspaper in that place, which was owned by William D. Jenkins and Thomas Nicklin, both of whom were his sons-in-law. In 1885 Mr. Axton took up a homestead at Ten Mile, of which locality he was one of the first settlers, and here he at once entered upon the task of clearing the land and developing a permanent home. The tract was covered with the primeval forest and wild game was numerous all through that section. The only entrance was over the old Telegraph road, from which highway he built a private road to his land, about thirty acres of which he cleared and put under the plow. He devoted himself indefatigably to his farm and before his death, which occurred at his home in 1909, he had the satisfaction of seeing the fruition of his plans and efforts, his farm being numbered among the best in this section of the county. Luther C. Axton was married to Miss Cynthia Ann Wheeler, a native of Indiana, in which state their marriage was celebrated, and her death occurred in 1918. They were the parents of five children: Elvira, who was the wife of William D. Jenkins, is deceased; Milton C., who was interested in logging and in sawmills here and in Canada, was a native of Indiana, and he died in 1923. Flora is the wife of Thomas Nicklin. Two children died in early life before the family came to Whatcom county. Mr. Axton was a veteran of the Civil war and was a charter member of J. D. Stedman Post, Grand Army of the Republic, at Bellingham. he was also a charter member of Bellingham Lodge No. 44, Free and Accepted Masons. his war record was an honorable one, covering a period of three and a half years, a part of which time was spent in the secret service. Mr. Axton took an active interest in local public affairs, holding a number of township offices in the early days, and was a delegate to many conventions of the republican party, which he stanchly supported throughout his life. History of Whatcom County Volume 2, Lottie Roeder Roth, pub. 1926, pg. 294 https://genealogytrails.com/wash/whatcom/Bios/bios_ar.html

By the death of Luther C. Axton at his home near Ten Mile at 3 o'clock yesterday morning, Whatcom county loses one of its most influential citizens, one who was an important factor in laying the foundation for the upbuilding of not only the county but the city of Bellingham as well. Always on the frontier and possessed of a high degree of justice and equity he was at once a leader in affairs political; commercial and social, and such is the part he played in the formation of this county, as well as the other new localities. He was of that sort of man who made friends, due to his indomitable courage to aid in the right and to put a veto to that which seemed to partake of crookedness, especially in the official affairs of the county, state and nation.

Mr. Axton came to Whatcom County in 1883, with his family. He at once located on a homestead near Ten Mile, where he resided continuously to the time of his death. He was a charter member of the local Masonic lodge as well as a charter member of J. D. Steedman Post, G. A. R. At his wish expressed before death the member of both lodges will officiate at the funeral ceremonies. Mr. Axton was born in Kentucky seventy-five years ago. When a young man he moved to Indiana, where in 1855 he married Miss Cynthia Ann Wheeler. Later he moved his family to Missouri, where he joined the Union army and served three and one-half years in various capacities as a private and officer. He was one of the few secret service men who were entrusted with important missions in the conduct of the warfare in that state which was infested with an element extremely adverse to the Union army. He is survived by a widow and a son, Milton C. Axton, who were with him at the time of his death, besides two granddaughters, Miss Zulu Jenkins and Miss Crickett Axton; two grandsons, D. C. Jenkins, of the Seattle P. I., and Will D. Jenkins, a member of the mill firm of Axton & Jenkins, operating a lumber plant near the Axton homestead. Funeral arrangements have not been completed but will be held under the auspices of the Masonic fraternity in this city.
(From The American Reveille, October 21, 1909)