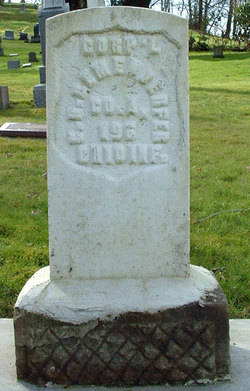 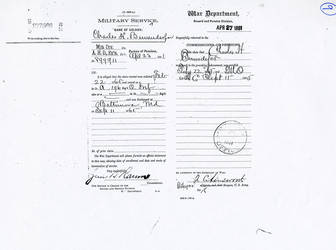 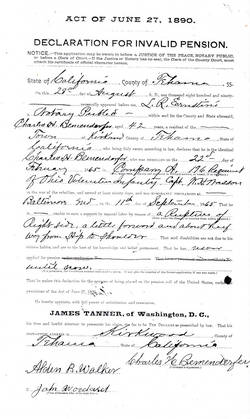 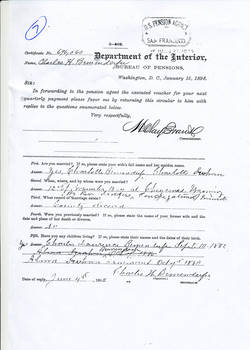 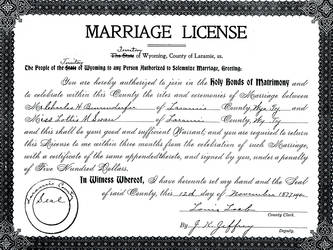 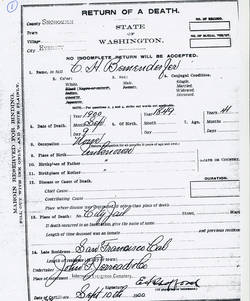 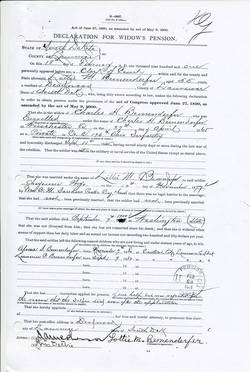 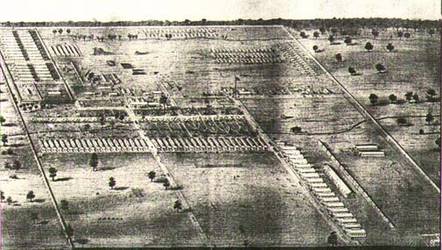 A one year regiment, the 196th was formed in the waning days of The Rebellion.  Following federal muster it immediately started for Winchester, VA where it joined the Ohio brigade.  The unit remained at Winchester until July when it was ordered to Baltimore, MD and assigned to the fortifications around the city.  A portion of the unit was also sent to Ft. Delaware.  Without ever having fired a shot in anger, during its brief period of existence the 196th lost 25 enlisted men to accidents and disease.

*   NOTE:  One source indicates this soldier was also borne on military rolls as Charles H. Bemendoffer.  However, documents at hand do not reflect such a surname spelling.

If available documentation is correct, Henry Bemenderfer (b. VA) married Rebecca Elizabeth (nee Prince b.1/14/31 MD) when she was very young.  The couple produced nine children:  John Peter, Mary Ellen, Selinda Susan, Emma Frances, Allen A., Charles H. (b. ca. 6/1848 or ’49 OH ), Cora E., Hattie M. and Bertrand I.  There is no information pertaining to his childhood, formative or early teenage years.

Charles’ brief exposure to military life was apparently benign. As his unit was not exposed to combat there was no wounding.  Also, there is no recorded evidence of minor or serious illness.  Even so, in later years Charles would apply for and received a U.S. Government disability pension based on a “rupture of the right side, a little forward and about half way from hip to shoulder” which allegedly stemmed from his months of Civil War soldiering.  Finally, the fact that he rose from the rank of private to that of corporal indicates he responded positively to life in the army.

At some point Charles left his wife and children.  By August, 1890 he was in Kirkwood, CA.  He later lived in San Francisco and, from there, reportedly traveled to Everett, WA.  It was there, on 9/9/00 the unemployed former Civil War soldier died while being held in the Everett City Jail.

Although a death certificate filed the following day noted he had been 41 years of age, pension file dates indicate Mr. Bemenderfer was 53.  The reason for his incarceration and death were not noted.  Somehow Lottie learned of her husband’s death.  On 2/18/01, residing in Deadwood City, S.D., she applied for a widow’s pension in order to continue receiving all or part of Charles’ $8 per month government stipend.  The outcome of the application process is not known. When and where Lottie died is also not known.