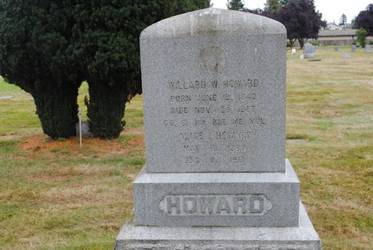 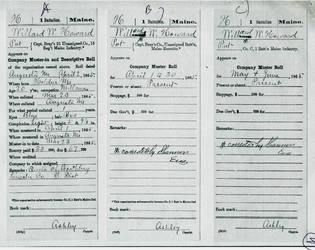 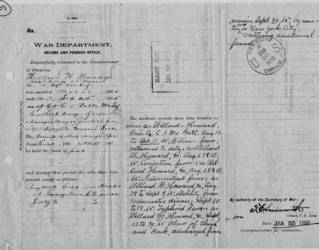 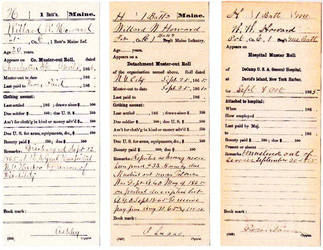 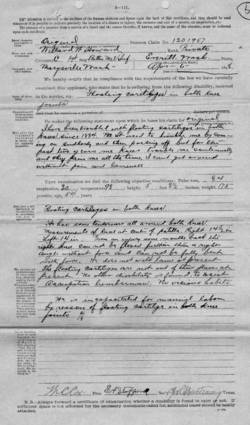 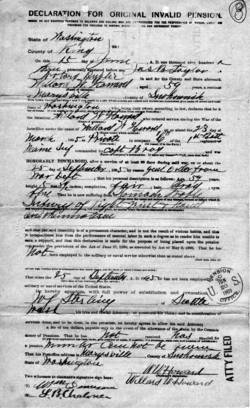 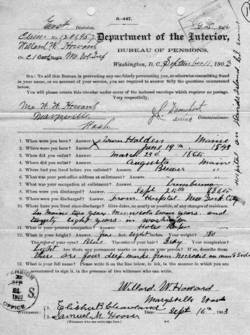 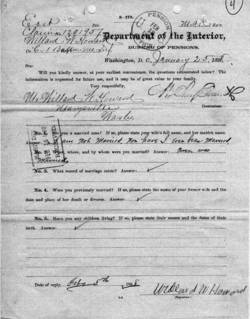 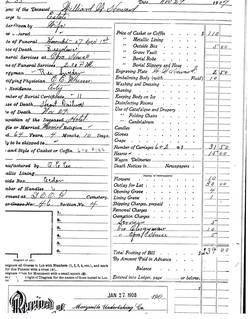 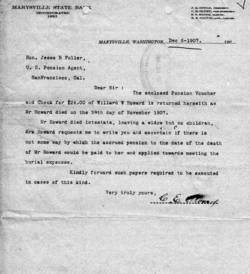 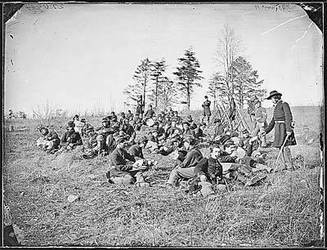 This eastern theater unit began its existence as the War of The Rebellion wound to a close. It was composed of the 21st, 24th, 25th and 26th companies of unassigned infantry and was mustered into the U.S. service in February and March, 1865 to serve for a period of one year. The above companies were initially designated for inclusion in the 15th Maine Volunteer Infantry, but as there were no vacancies in that regiment the 1st Maine Battalion was formed with companies designated "A", "B", "C" and "D".

Initially the 1st was assigned to the 2nd Brigade, Dwight's division which was serving in Virginia's Shenandoah Valley. It was subsequently moved to Washington, D.C.  where it remained until 6/1/65. From there it moved south to Savannah, GA and on 7/4 was ordered to South Carolina where it did duty at various locations until 4/5/66 when it was mustered out of existence.

Willard's youth was spent working on his family's farm, but by the time he entered the military in March, 1865, he was employed in the Maine timber industry as a lumber and/or mill man. At enlistment Private Howard was 5'9" plus - the inch fractions would change over the years - inches in height, had blue eyes, brown hair and was lightly complected. His initial enlistment was into Captain Bray's Company of unassigned Maine recruits which became company "C" of the 1st Battalion Maine Infantry.  For enlisting Willard was paid a $100 bounty (enlistment bonus) of which he received $33 up front. The remaining monies were to be paid in two increments.

Almost immediately following being mustered in into Federal service Private Howard's first name appeared on company rolls as William, rather than Willard. That being corrected, Private Howard, a man raised in the cold climates of Maine, found himself in South Carolina where the climate soon "laid him low." From August 12th when he was left sick at Darlington, SC until his 9/25/65 medical discharge from DeCamp General Hospital located on David's Island, New York harbor, New York City, New York private Howard was hospitalized. His first diagnosis was bilious fever. Next it was congestion fever. After that there was intermittent fever and a diagnosis of debility from miasmatic disease. Finally, shortly before discharge he was diagnosed as suffering from typhoid fever as well as ulcers of the thigh and back. Likely the latter stemmed from months of lying in bed.

Army life behind him Willard returned to Maine where he settled in the county of his birth. Whether or not his initial residence was with his parents is not known. Willard was to remain in Penobscot County until removing to Hennepin County, Minnesota sometime in 1868. The 1870 U.S. census found him in that state and county living in Minneapolis. He was, at the time, employed as a "shingle packer."

Sometime between 1874 and 1875 Willard departed Minnesota for Marysville, Snohomish County, Washington Territory. What prompted the move is not known, but likely it was the lure of the timber industry in that portion of the Puget Sound region. The 1880 census found him still in Snohomish County, but then residing in or near the City of Snohomish. His occupation at that time was noted as "laborer."

Circa 1884 lumberman Howard began experiencing problems in both knees caused by floating pieces of cartilage. The spells would reportedly come on suddenly than then "pass off", but over the years worsened until, by 1896 he was unable to get around without pain and lameness. This prompted his application for a U.S. Government disability pension based on his period of Civil War soldiering. While the knee problems would not prove a successful pension getter, stomach problems experienced since l897 and the wrist/hand injury suffered in childhood with resulting bone necrosis and rheumatism, would, so on 6/20/03 he was granted an $8 monthly stipend. Additional ailments contributing to the pension granting were heart problems. All of the above prevented him from performing manual labor. That same year his occupation was noted as "hotel keeper."

The hotel keeper occupation is interesting as the 1910 census for Marysville, WA would find one Alice I. Howard (b. 1860 IA) as the landlady of a hotel and a widow. Obviously, sometime after 2/5/98 when he had noted on a pension form that he was "not married, never married and had no children," Willard Howard had wed a woman who apparently owned a hotel. The union would produce no children.

Willard W. Howard died 1/29/07 in Marysville, WA. At death he was 64.4 years of age. By that time disability pension had risen to $12 per month. Cause of death is heart failure. Burial was at the Marysville Community Cemetery.
Alice died 12/7/10. She is buried beside Willard.