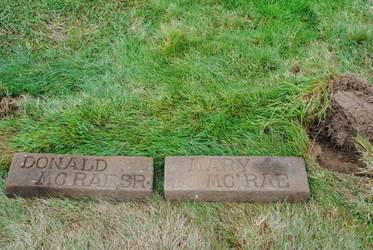 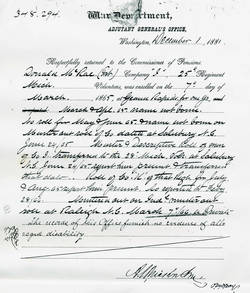 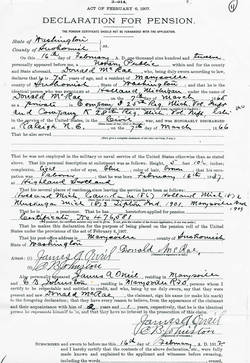 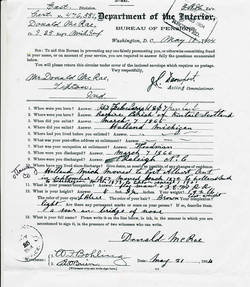 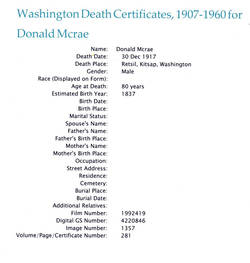 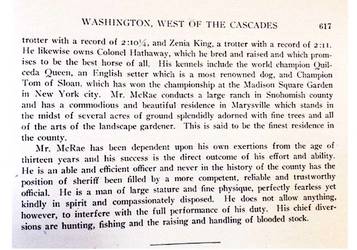 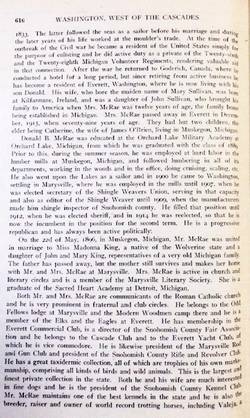 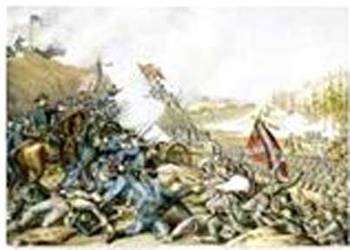 This three year "western-theater" regiment was brought to field strength in late 1864 with the consolidation of the 28th with the 29th Michigan infantries. The organization departed the state for Louisville, KY on 10/26/64. Upon arriving at the latter location it was assigned escort duty on a wagon train bound for Nashville, TN. Upon reaching that city it took part in the Battle of Nashville which saw the defeat of Confederate troops under Gen. John B. Hood and resulted in the driving of Rebel forces from the State of Tennessee by the end of the year.

January, 1865 found the 28th on transports bound for North Carolina to join forces with the armies of Union Gen. William T. Sherman as they marched northward from Georgia through the Carolinas. During this campaign, at an engagement at Wise Forks the regiment repulsed attacking Rebel forces  losing seven killed and thirteen wounded. The unit then marched inland to Goldsboro, NC where it was assigned to railroad guard duty.

After the surrender of Confederate troops under Rebel generals R.E. Lee and Joseph Johnson, the 28th was assigned to duty in various parts of North Carolina until mustered out of Federal service on 6/5/66. It then returned to Detroit, MI for final payment and disbanding.

A three-year "western theater" regiment, the 25th departed Michigan for Kentucky shortly after receiving Federal muster. Once in the latter state it was assigned to provost (military police) duties in Bowling Green and Louisville.

In mid-1863 a small, handpicked group of the 25th thwarted Confed. Gen. John Morgan's attempt to cross the Cumberland River and march on Louisville. During this action the regiment lost 6 killed and 23 wounded while the Rebels suffered many more casualties. In August '63 the entire regiment was assembled at Lebanon, KY and began a long, arduous and toilsome campaign into eastern Tennessee which was to last throughout the winter.

April, 1864, found the 25th joining the armies of Union Gen. W.T. Sherman as they moved upon Atlanta, GA. During this campaign the regiment was actively engaged with the enemy on numerous occasions. Will the fall of Atlanta the unit moved to Nashville, TN where it helped defend that city from encroaching Rebel forces.

From Nashville, in early 1865 it travelled northward and eastward to join General Sherman as his armies marched north through the Carolinas. Following the final surrender of all Confederate forces, the 25th was moved to Salisbury, NC where it was mustered out of existence.

ED. NOTE:  The birth-to-death biographical profile which follows is an updated version of the original written some years back. The rewrite was competed in November, 2018 based on new family information which had come to light on this Civil War veteran, his travels and his family.

Donald McRae was born in Highland, Kintail Parish, Ross County Scotland. The year was 1837. His birth date and month were likely the 16th of February. His father and grandfather were also named Donald. The name of his mother is not known.

In 1849 the three Donalds – grandfather, father and son – emigrated from Scotland to north America settling in Goderich Canada. Young Donald then took to seafaring, an occupation which he pursued until marriage.

With the outbreak of civil war in America in 1861, young Donald (henceforth Donald) moved from Canada to the United States “simply for the purpose of enlisting [in the military].” That having been said, first American documentation on him stems from August 7, 1861 when, in Chicago, IL, he wed Mary Sullivan (b. 12/6/35 Scotland).

Decades later, during the 1910 U.S. Census Mary noted that she had come to American with her birth family in 1857. Further, she indicated she had been married twice and borne four children, only one of which was then living. However, the 1880 census designated her maiden name as Sullivan, so the “prior marriage” information may be erroneous.  Although the union of Donald and Mary would last fifty six years, it produced only two known children: Catherine (b. unk.) and Donald B. McRae (b. 4/13/68 Canada). In summary, Mary’s marriage/childbirth status remains unclear.

Again, although Donald reportedly came to America to enlist in the military, he did not do so until 3/7/65 during the waning days of The Rebellion. At that time he and Mary were living near Grand Rapids, Michigan in the Ottawa County community of Holland. His physical description upon enlistment was 5’ 10.5” in height, having a light complexion, blue eyes and brown hair. His occupation was “laborer.” To be more specific, he was likely a woodsman.

As far as places of residence, the first notation on Donald is from March 7, 1865 when he enlisted in the U.S. Army. At that time he was living near Grand Rapids, Michigan in the Ottawa County community of Holland. Upon enlistment he was noted as being 5' 10.5" inches tall, having a light complexion, blue eyes and brown hair. His occupation was "laborer." More specifically, he was likely a woodsman. As for his brief U.S. military service, being during the waning days of the War, it was uneventful and benign, the only activity of significance being his transfer, with other members of his unit from the 28th Michigan Infantry to the 25th on June 24, 1865. At the time of transfer he was stationed at Salisbury, NC. He would remain in the army until March 7, 1866.

According to one source, after exiting the service Donald and Mary moved to Canada and settled in Goderich. More evidence, however, points to him returning to Holland, Michigan where he and his wife remained until September, 1867 when they moved north to Port Albert, Ontario, Canada. They would remain there until 1872.It was during this Canadian stay that son Donald was born. As far as employment for the newest Donald McRae’s father, there are indications that he mays have been employed operating a hotel.

When the McRae's returned to the U.S.in 1872 they again settled in Holland, MI. On this occasion they remained there a year or less before, in 1873, moving to Muskegon, Musk County, MI. It was there the 1880 U.S. Census found him noted as a laborer * with his wife, son and two other adults in the household. One of those latter adults, Alice Sullivan, (age 70, b. Ireland) was likely Mary's mother. The other was a male boarder, retired farmer Eyra Read (b. 1800 NY).

The McRae's remained in Muskegon until April 1, 1901 when they again moved, this time to Lipton, Indiana. May of 1904 saw Donald there employed as a flagman on the L.E.W. Railroad. Sometime shortly after this notation the couple moved to Marysville, WA. Likely the move was made to this western Puget Sound location because son Donald lived in the region.

Mary McRae died in Everett, Snohomish County, Washington 1/11/1916. Details of her passing are not available. Burial was/is in the Marysville Cemetery.

Former Civil War soldier Donald McRae died December 30, 1917. At some point during his life the former Civil War private had applied for and been granted a U.S. Government pension based illnesses or injuries which traced back to his military service. At the time of his death he was receiving a $24 per month stipend. The old soldier was buried in the Marysville Cemetery beside Mary.

*Note: At some time later in life while still employed Donald’s “laborer” tag was more specifically said to have been the duties of a “molder” likely in a cast iron metal business.