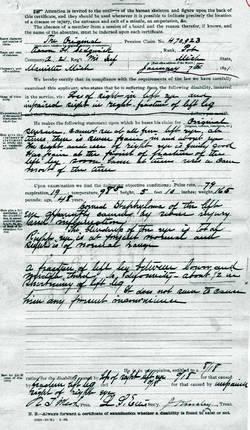 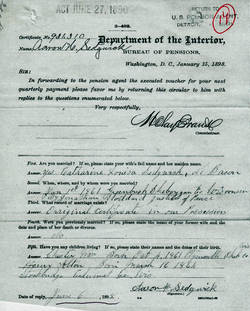 This three-year western theater regiment left the State of Wisconsin on 9/11/62 being sent to Kentucky to assist in the defense of Cincinnati, OH. Never having been under enemy fire, during the battle of Perryville, after a march of twelve miles, it was placed, by mistake, alone in an exposed position subject to the fire of both friend and foe. It escaped utter destruction only by breaking ranks and rallying to a new position in the line of battle. Losses this date were 179 killed, wounded or missing. Guard and provost (military police) duty followed until, at the end of the year, it was ordered to Nashville, TN.

1863.  The 21st moved with the Army of the Cumberland into Alabama and Georgia, arriving at Chickamauga (Sept. 18-20) in time to take part in the second day's fight at that place. During this furious fight, when ordered to retire, it fell back to a second line of defense where surrounded, 70 officers and men were captured by the enemy. The regiment concluded the 1863 combat year by being held in reserve during the battle of Nashville.

After spending the winter of 1863/'64 stationed atop Lookout Mountain outside Nashville, the 21st, in the spring, joined the forces of Union Gen. W.T. Sherman as they moved upon Atlanta, GA. Actions during this campaign included Resaca, Dallas and Kennesaw Mtn. It was involved in siege and guard duty until the fall of Atlanta. Participation in the battle of Jonesboro followed as did the "march to the sea" with Sherman.

1865 found the 21st moving northward from Georgia through the Carolinas. A movement to Richmond, VA then preceded participation in the Washington, D.C. Grand Review.  Final muster occurred shortly thereafter.

* NOTE: Aaron Henry Sedgwick's transfer into this regiment was after the War had ended. It was prompted by the U.S. Government’s desire, for financial reasons, to quickly remove, through consolidation, as many fielded units from the books as possible. Although technically assigned to this regiment, it was assignment by paperwork only. Since Private Sedgwick never physically served with the 3rd, the history of this unit is not presented herein.

By time of the 1850 U.S. Census the Sedgwicks had departed New York for Wisconsin where they had settled in Plymouth, Sheyboygan County. The family was in the same location a decade later. At that time Aaron was noted as being a laborer on his parents' farm.

The first information pertaining to Aaron outside his birth family comes from 1/1/61 when, in Greenbush, Sheboygan Co., WI he wed to Catharine "Kate" Louisa Bacon. (b. ca.1844 OH). After marriage the young couple apparently settled in Aaron's birth community of Plymouth as that is where the union's first child, son Chester William (b. 10/4/61 or 1862 WI) was born. Whether or not that settling and birth were on Aaron's parents' farm or one of their own is not known.  A second child, son Henry Alton was born in 1864. That birth, the month and date of which is not documented, was also in Wisconsin.

Whether before or after Henry Alton's arrival, on 2/11/64 in Fond du Lac, WI Aaron enlisted in the U.S. Army. Undoubtedly one of the motivating factors for the enlistment was the $300 enlistment "bounty" or bonus that was being offered at the time. At enlistment private Sedgwick's vital statistics were as follows: between five foot nine and eleven inches in height, darkly complected, with dark hair and a florid complexion. Occupation was noted as "farmer."

Illness would prove to be private Sedgwick's worst enemy during the months to come.  Treatment for Ophamalia (eye problems) sidelined him from duty in late April and early May. This was followed shortly thereafter by a spinal injury, rheumatism and bronchitis. These four noted ailments would show him on the company roster as "absent sick" throughout the remainder of 1864.

1865 was to prove somewhat less medically debilitating for Aaron, but not much. While the first three months found him returned to duty, April brought a brief bout of dysentery while May presented a spell of lameness due to marching. On both accounts he was returned to duty. By July , after having been transferred to the 3rd Wisconsin Infantry due to the War's end and consolidation of fielded regiments  he was once anew treated for Opthamalia -  which finally resulted in the loss of sight in his left eye - and for a hernia.  The conclusion of all this medical activity was that Aaron was sent home on furlough on July 2nd. As such, while his final muster and discharge records would reflect Louisville, KY and Madison, WI, those locations were strictly on paper as Aaron was at home at the time.

The U.S. Census for 1870 located the Sedgwick family of four in Fond du Lac, Fond Du Lac County, Wisconsin.  Aaron's occupation at the time was not noted.  A decade later the foursome had quitted Wisconsin for Manistee, Manistee County, Michigan where Aaron was employed as a teamster. The family would remain in Manistee for the remainder of the nineteenth and at least the first year of the twentieth century.

1906 found Aaron and Katherine having moved westward to the City of Everett, Snohomish County, Washington.  Exactly when and why the move was made is not known.

May 2nd of 1906 located the Sedgwicks at 3010 Gedney St., Everett. On that date and location the former Civil War soldier, still employed as a teamster, petitioned the U.S. Government for an increase in the $8 per month disability pension he had earlier been granted based on ailments and illnesses which traced back to his soldiering days. Besides the loss of sight in his left eye, these included having a double hernia. The attorney assisting him in this process was J.T. Sherfey, also a Civil War veteran. (Mr. Sherfey is buried in Everett's Evergreen Cemetery.)

community of Marysville were Aaron was engaged in farming.  It was apparently there, in 1814, that Katherine died.  She was buried in the Marysville Community Cemetery.

Aaron Henry Sedgwick died 7/4/18 in the Old Soldiers' home located in Orting, Pierce County, Washington. Who had moved him there and when is not documented. At passing his government disability stipend was $24 per month. Burial was beside Katherine in Marysville.