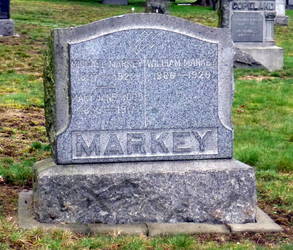 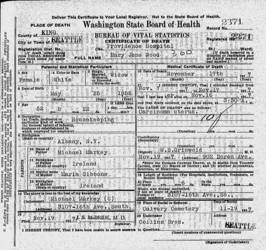 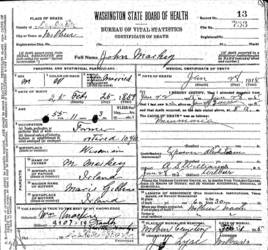 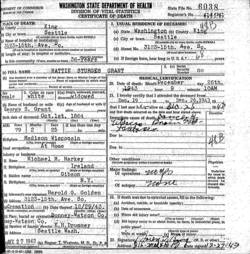 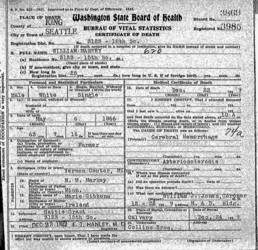 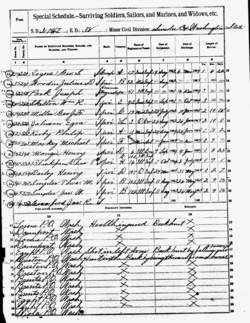 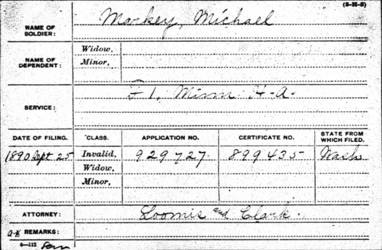 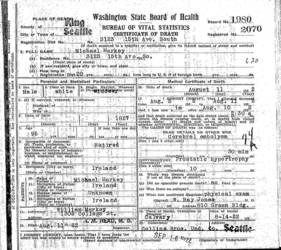 The 1st Minnesota was a one year heavy artillery regiment. Its entire period of existence was spent in the American Civil War's (ACW) western theater city of Chattanooga, TN.

Mustered into Federal service by as twelve companies of one hundred forty men each, the 1st - during the winter of 1864/'65 - was immediately ordered to Chattanooga, TN. Although four bloody years of civil war was grinding towards closure, it was thought that Confederate forces would attempt to recapture the city, so the 1st's taking over the heavy guns and forts of the area was a responsible assignment.

The regiment remained in Chattanooga until called home by companies for final muster.

As for Michael's parentage, it appears his father was also named Michael. His mother's name is unknown. Both were Irish-born. Based on available documentation, neither ever immigrated to America.

Another birth family question regarding Michael pertains to siblings. It appears; he had at least one, a much younger sister named Kate. Kate was born in Ireland in 1853, so it is highly likely she had older sisters and brothers besides Michael.  We know she came to the U.S. because she was living with Michael in 1880 and 1889. ***

According to the U.S. Census of 1920, Michael immigrated to America during 1852. Arriving in The States he settled in New York. There, he married and became a father.

Michael's bride was Maria Gibbons. Maria had been born in Ireland during 1830. When she had come to America is not known. It is surmised that the two met and married in New York circa the mid-1850s. Their first child was born in New York during 1858.

At the time of the 1860 U.S. Census the Markeys were residing in Trenton Dodge County, WI No occupation is presented for Michael while in Trenton.

By early 1865 Michael and family were farming in Vernon Center Blue Earth County, MN. Exactly when they had moved to this region which contained some of Minnesota's richest farmland is not known.

In February, 1865, in Vernon Center, MN Michael enlisted in the U.S. Army. His unit was the 1st Minnesota Heavy Artillery, a one year unit safely ensconced in the Union fortifications surrounding Chattanooga, TN. With Chattanooga firmly in Federal hands by 1865, it is doubtful Private Markey, during his short enlistment stint, fired a cannon round in anger.

Military life behind him, Michael returned to his home and family in Blue Earth County, MN. It was there, in 1866, his final child, son William, was born. It was also that year that Maria died.

Although details of her passing are unknown, it can be surmised that Maria died in conjunction with Michael [III's] birth. Her final resting place is another unknown.

According to the 1880 U.S. Census our Michael, a widower, remained in Vernon Center until sometime later in the decade. Then, he moved westward - far westward - to Washington Territory/State.

Exactly when Michael came to Washington is an unknown, but it was during the early to mid-1880s. One why was likely Maria's death. Another appears to have been the availability of homestead farmland which he could acquire based on his brief period of military service.

In 1889 Michael and his sister, Kate, were farming in eastern Washington's small, rural, Lincoln County community of Creston. That is also where the Civil War Veteran census of 6/1890 found both with the mysterious Wayne Markey in their home.

It appears that on the same 9/1890 date former Union artillerist Michael Markey filed for a homestead, he also applied for a U.S. Government disability pension based on his days of Civil War soldiering. That a pension was granted - based on heart problems stemming from being thrown from a horse - we know. Without accessing pension files the amount of his monthly stipend remains unknown.

How long Michael remained in Lincoln County, we do not know. At some point in time it appears he moved to Seattle King County, WA where married daughter, Hattie, resided. The 1900 U.S. census for Lincoln County names only son William farming in that community.

No U.S. Census has been found for 1910. The 1920 tally found Michael in Seattle apparently residing on his own.

Michael died at home in   Seattle on 8/11/1922. Cause of death was noted as “cerebral embolism with “prostatic hypertrophy contributing.  The old soldier was/is buried in that city's Catholic Calvary Cemetery.

**According to the 1890 Civil War veteran census Private Markey served until sometime in November, '65.

*** In 1889 under Michael's roof, in additional to his sister Kate Markey, was a Wayne Markey (b. 1873 Dakota City, Dakota Terr.). Where and how this individual fits into Markey family diagram is not known.

**** Sources indicate Mary Jane was born in New York. Nobody, not even family, seems to know where the CT comes from.