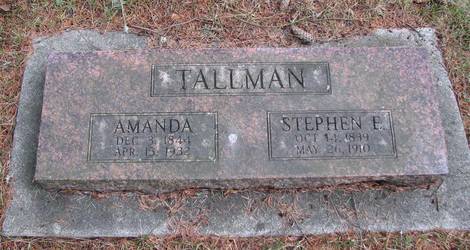 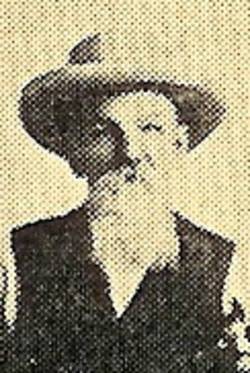 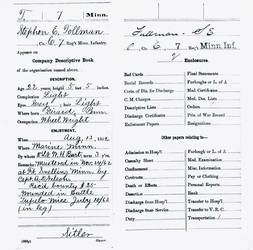 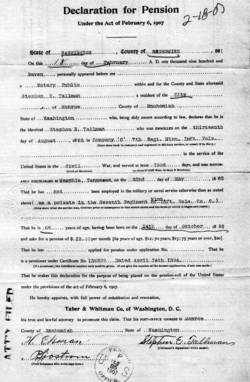 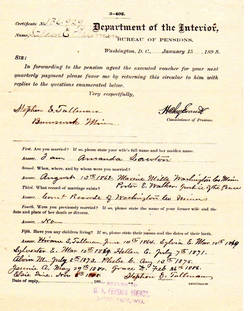 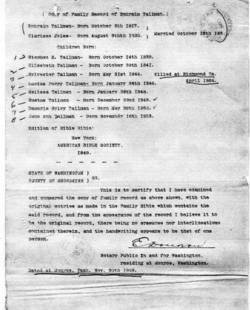 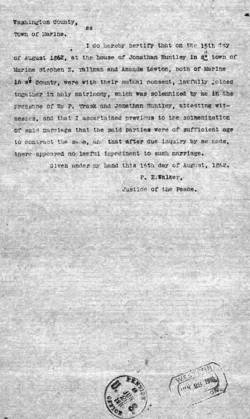 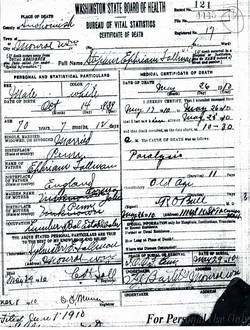 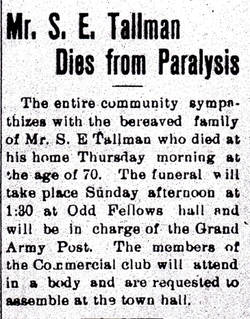 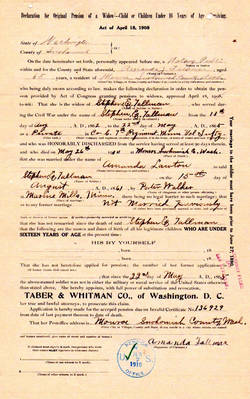 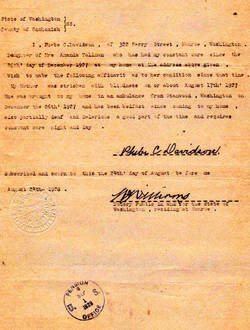 A three year "western theater" regiment, the 7th was organized in August/September, 1862 by companies which were immediately sent out into the state to deal with the Sioux uprising. Companies "A", "B", "F" and "G" - in early September - were dispatched to Birch Coolie, MN to relieve a besieged unit. Arriving at that place they aided the wounded and helped bury the dead before heading for Ft. Ridgley, MN.

Joined by company "H", these elements of the 7th left Ft. Ridgley on 9/17 and were engaged with the hostiles at Wood Lake. They were then at Camp Release before moving to Camp Sibley where company "A", having been detached for burial of the dead around Yellow Medicine, MN joined them. They next moved to near Mankato, MN, being joined there by co. "K".

With some companies dispersed from Mankato, most of the regiment was assigned to guard duty over those Native Americans earlier taken prisoner. Thirty eight of those were later hanged, an event during which elements of the 7th were present.

In May, 1863 the regiment moved to Camp Pope on the Redwood River.  From there it joined the movement towards Dakota (Terr.). In July cos. "C" and "I" were detailed to camp Atchison. The following week the 7th was engaged at Big Mound and several skirmishes with the hostiles.  It then began the trek back to Ft. Snelling which it reached on September 9th.

In early October, 1863 the 7th finally left Minnesota to fight Johnny Reb. Guard duty at St. Louis, MO was their initial assignment followed by a move to Paducah, KY which was reached in April, 1864.

June, '64 saw the regiment moved to Memphis, TN. It then was in the campaign through Mississippi where it was engaged at Tupelo losing 10 killed and 52 wounded. Participation in the Oxford raid and pursuit of rebel forces through Arkansas and Missouri followed. It reached Nashville, TN on November 30th and, shortly thereafter was active in the battle for that city. Pursuit of retreating Rebels occupied the regiment until the first days of January, 1865.

The first months of '65 saw the 7th move to Eastport, MS, New Orleans, LA and to Mobile, Al. At the latter location it participated in the siege and capture of Spanish Fort and Fort Blakely.  It was then transferred to Montgomery and thence to Selma where it remained until ordered home for final muster.

1857. The Tallman's were still in Minnesota, living in or near the Washington County community of Stillwater.  That year Ephriam was not in the household, he having died in Washington County in 1854. Heading the Tallman fold was Clarissa/Claressa with son Stephen (then employed as a carpenter), son Sylvester, son Lucious and daughters Damaria and Jane Ann in her care.

In 1860 U.S. Census takers came around again, but in terms of available records, Stephen cannot be found.  Likely, however, he was somewhere in Minnesota as it was there on 8/15/62 (some sources say 1861, but the sworn statement of the county says '62) in the community of Marine Mills, - today just Marine - in the home of one Jonathan Huntley he wed Amanda Lawton (alleg. b. 12/3/44 NY).  As Amanda was a resident of Marine, likely Stephen was, too.

As an interesting precursor to his wedding date, two days earlier, also in Marine, young Stephen had enrolled in the U.S. Army for a period of three years. For enrolling he was awarded $25 of a $100 bounty (bonus) and premium.  His vital statistics at enrollment - and the day of his wedding - were as follows: 5'5" in height, complexion light, eyes gray, hair light.  His occupation at the time was noted as lumberman and millwright.

Almost immediately after entering the service Private Tallman was assigned to duty in the regimental quartermaster depot where, if not at first, at least later, he was a carpenter. While in the military his surname would appear as Tallman, Talmann, Toleman, Tollman and Tolman.

Stephen's first year in the service proved uneventful. The second and third proved more interesting.   On 10/1/63 he, for some undisclosed reason, was listed as being away without leave (awol) from his duties.   He reportedly returned to his post on 11/3/63.  Interestingly, he an Amanda's first child -son Willard H. - was born in 1863. (Note:  Available documentation mentions a child named Alice also being born in 1863, but the name does not appear later. Did Willard have a twin sister who died at birth? We likely will never know. )  Perhaps Private Tallman made an unauthorized trip home to Minnesota for the birth/births. Whatever the reason for the absence, no court martial proceedings came from it!! The couples' second child, son Hiram S. would be born the following year without incident - at least for Private Tallman.

Again, for some undocumented reason, in March, 1864 the U.S. Government provided transportation for Private Tallman between Joliet, IL and St. Louis, MO.  For this service he would be charged $5.05.

Later, in 1864, this third year of being a volunteer soldier, his situation took a more serious turn when, on 7/14/64 during the battle of Tupelo, MS he was wounded when a rifle bullet entered his right leg "just above the knee joint in back of the bone cutting, in its passage, the small cord on the underside." Stephen was treated for this wounding at Washington U.S.A. General Hospital in Memphis, TN where - being now unfit for field service - he was subsequently assigned to nursing duties. He would remain there for the remainder of the War.

Separated from the army, Stephen returned to Minnesota and his family. It appears he initially resettled in Washington County - perhaps in Marine Mills -, but later removed to Kanabec County.  It was in the latter county's community of Brunswick the census of 1870 found he (a lumberman), his wife and family.  The family then encompassed Willard, Hiram, Mary E. (and S. E. male) b. 1867, and twins Sylvester E. and Sylvia E. (b. 1869).

On February 27th of 1871 Stephen began receiving a $4 per month U.S. Governmentdisability stipend because of his Civil War wounding. The pension was authorized because, by this time, the wounding had reportedly forced him to abandon his business as a lumberman and prevented his even doing “a day's worth of walking on a common road.”

In 1900 the Tallman clan was still in Brunswick, Kanabec County, MN, but as of Thanksgiving Day of 1901 they had reportedly moved westward and resettled in or near the community of Monroe, Snohomish County in the Puget Sound region of Washington State. As for the why of the move, it was likely a combination of having married children in the area and the existence of vast expanses of timbered land and the resulting logging boom.  In 1910, Stephen would list his occupation as a lumber sales (and real estate broker). In that same census tally Amanda would note having birthed twelve children, (four sons and eight daughters) nine of whom were still living.

On 5/26/10, apparently not long after that year's census information had been accrued, Civil War soldier Ephriam  Stephen - his obituary would note that in later life he had reversed his given name - Tallman died at the age of seventy years and seven months . Cause of death was noted by son Sylvester - who may have been a doctor by that time as he reportedly "attended" the deceased from May 10thuntil his passing as “paralysis" with "old age" contributing. Excerpts from his Monroe Monitor newspaper obituary are as follows:

"The funeral obsequies held over the remains of Mr. Stephen E. Tallman Sunday afternoon at Odd Fellows hall were very simple, very impressive and of such a character as to markedly show the respect and regard in which the deceased was held by is fellow townspeople. Two members of the Commercial Club, which organization Mr. Tallman served faithfully in the capacity of secretary, were present in numbers, uniting with the old soldiers and ladies of the Relief Corps in paying honor and respect to the dead......When the cortege left the hall on the way to the cemetery, the Monroe band played a funeral march as the people filed out.........The death of Mr. Tallman is a severe blow, not only to the members of his family, but to a large circle of people  who know well his generous, kindly disposition.  The editor new him as a man whose charity covered all things and all persons.  He had little prejudice except for petty meanness’s and viciousness and he was blessed with a most sympatric understanding of the troubles, faults and pains that enter so largely into life....... (He and his wife, Amanda) had twelve children, four sons and eight daughters, of whom nine are living, all in this vicinity except a daughter whose home is in New York.  Mr. Tallman was an energetic progressive pioneer of the early Middle West days and a citizen whose life affords a most worth(y) example, as it was entirely in the service of his country and his fellow citizens and who-ever performed the duty that lay to hand.  He steadily went along from one position of honor and respect to another, doing his utmost to advance the condition in the community in which he lived.  As a soldier....almost immediately being sworn in (his) regiment was sent to Ft. Snelling to face the terrible outbreak of the Sioux Indians. On Oct. 7, 1863, the regiment was ordered south and was in the battle of Tupelo, the pursuit of Price, the Oxford Raid and at the battle of Nashville. Returning to his home in Minnesota after the war, Mr. Tallman at once took up the pursuit of peaceful projects and showed his energetic and progressive character in starting the first newspaper in Kanabec county, also the first sawmill and the first shingle mill and the first flour mill.  He served his country in different official capacities for many years, serving one term as countyattorney, one term and surveyor, three terms as register of deeds and four terms as county auditor, giving to the county government eighteen years of his labor besides looking after his other enterprises."  Burial was in Monroe's I.O.O.F. Cemetery.

By November, 1909 Stephen's Civil War-related disability pension had grown to $15 per month. Upon her husband's passing the widowed Amanda, within weeks, petioned the U.S. Government to continue receiving at least a portion of this stipend. Almost immediately she was granted a monthly income of $12. In 1926 that stipend would be upped to $50 per month.

One decade later. 1920.  By this time Amanda was still in Monroe, but residing with married daughter Helen E. "Nellie" and family. The settlement was not permanent, however, as in August, 1927 she was stricken with blindness. Documents from the period note that at the time she was transported by ambulance from Stanwood, Skagit County, Washington to the home of daughter Phebe's - Mrs. George Davidson - home in Monroe. From that point onward she would be bedridden and in need of constant care.    Her moves, however, were still not over as - by August of the following year - she was in the home of another of her married daughters, the now Mrs. A. E. Whitehead.   Her condition at that time, besides blindness, also included being partially deaf and delirious part of the time.  During this period a pension increase above the $50 per month was sought, but denied because $50 was the maximum monthly stipend she was eligible to receive.

Another census. 1930 found Amanda having remained in Monroe.  By then, however, she was in the home of married daughter Grace Pownall. (Note: Grace had married Civil War veteran John Pownall.  John had died 6/12/1916. He is buried at the Monroe I.O.O.F. Cemetery).

After years of care by her daughters, Amanda Stephens died in Monroe, Snohomish County, Washington on April 15, 1932.  Her burial was in the Monroe I.O.O.F. Cemetery beside Stephen.