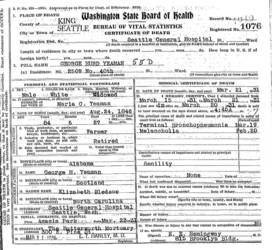 In Confederate Alabama during the early years of the American Civil War (ACW) there were about nine regiments and three battalions of reserves. These units were composed - for the most part - of very old or very young men. They were organized principally for the defense of Mobile and the bay forts.

Relieved at Spanish Fort the regiment was sent to Ft. Blakely where, (4/2 - 4/9) after enduring the privations and perils of that place being under siege by Union forces, the unit was captured. The captures were exchanged only a few days before the surrender of the Confederacy's Department of the Gulf.

George Hurd Yeaman was born 8/24/1846.  The location of his birth was Talladega County, AL.

Elizabeth had given birth to one child via her marriage to Evans. As best as can be determined, George was the only child produced by she and William.

As noted above, George's father died in late 1860. As far as we know he bequeathed his worldly possessions - i.e. his farm - to wife Elizabeth and son George. George then remained in his mother’s farm until he entered the army of the Confederate States of America in March, 1865.

Without accessing military service records - if such exist - it is difficult to tell whether Private Yeaman's enlistment was voluntary or by conscription. Either way, George’s military tenure was short.

Post American Civil War (ACW) the first we learn of George comes from the 1870 U.S. Census. That population tally found him back with his mother working the family's Talladega County farm. Others in the home at the time were an eighteen year old domestic servant and a two year old boy.

1880. Another decade, another U.S. Census. In 1880 George continued to till the soil in Talladega County, but it is difficult to say if he was still on the family farm.  In 1860 the farm was identified as being in the Southern Division of Talledega, while in 1870 it was characterized as being located in Township 21 Range 4 of the county. Finally, in 1880 it was noted in Syllacogga which is also in Talladega County. Likely, these were changing names of the same location.

By 1880 George was married.  In 1877 he had wed to Mariah “Maria” Crumpler. Maria had been born during the year 1850 in Coosa County, AL. How and when the two had met are unknowns.

Sometime after the birth of Kate in 1901 and the 1910 U.S. Census the Yeamans quitted Alabama and moved to Washington State. What had drawn them to the Pacific Northwest and when they arrived here are additional unknowns.

The first Washington State census sighting of George and family is from 1910. At that time they were farming in West Cheney Spokane County, WA.

As of 1920 the Yeamans had moved westward and were residing in Seattle King County, WA. Again, what had drawn them to the shores of Puget Sound and exactly when they arrived here are not documented.

Maria Crumpler Yeaman died in Seattle on 1/27/1931. Details of her passing are not known. She was eighty or eighty one years of age. Burial was/is in Acacia Memorial Park located, in what is the today the City of Lake Forest Park just outside Seattle's northern boundary.