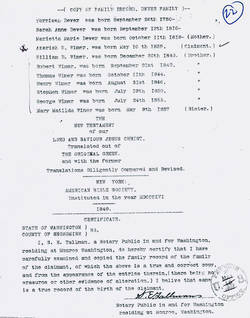 The 41st, a "western theater" three-year regiment, left Illinois for St. Louis, MO only three days following Federal muster. It remained there until 8/29/61 when it moved to Bird's Point.

In early 1862 the unit was the first engaged in the struggle at Ft. Donelson, TN. During this action, after exhausting its ammunition, it was overpowered and driven back with a loss of some 200 killed and wounded.

April, '62 found the 41st at Shiloh/Pittsburg Landing, TN where it formed the left of what became known as the "Hornets Nest." During the actions of that bloody battle's first day it lost another 200 men before the Rebels were repulsed. During the second day of fighting it was again heavily engaged and suffered severe losses.

Next came the siege of Corinth, MS followed. In October of '62 the 41st made a forced march to the Hatchie River in pursuit of Rebel forces retreating from Corinth.

Another April, this time in 1863; the 41st met the forces of Confederate General Chalmers on the Coldwater River then moved onto the siege of Vicksburg, MS where it lost another 50 killed and wounded. More losses were suffered during the actions around Jackson, MS.

In March, 1864 nearly 200 of the regiment enlisted as veterans and were furloughed home. During this period the non-veterans participated in the disastrous Red River Campaign. The regiment then took part in the Battle of Guntown, MS.

Going into camp after Guntown, the service terms of those men who had not reenlisted expired and they were sent home.  The remnants of the 41st were then organized into what was dubbed the Veteran Battalion 41st Infantry. This organization took major roll in Union Gen. William T. Sherman's Atlanta, GA campaign before marching to Savannah and the sea.

On 1/4/65 the 41st Battalion was consolidated into the 53rd Illinois Infantry forming companies "G" and "H" of that unit. The 53rd then moved northward through the Carolinas and, with the War ended, participated in the May Grand Review in Washington, D.C. Afterwards it was transferred to Louisville, KY where, on 7/22, it was mustered out of service and moved to Chicago for final discharge.

During the spring of 1864 Union Gen. U.S. Grant began moving his forces southward into Virginia in what became known as the Overland Campaign. Months later, the actions that followed would help bring an end to four years of bloody civil war.

To involve as many seasoned troops as possible in the Overland Campaign, many existing units were pulled from rear echelon positions and placed into the field. To fill the void created by removal of these troops from non-combat positions, a number of new, relatively short-term regiments were created. The 145th, a "100 day unit" was one such regiment.

The 145th, with a numerical strength of 880 officers and enlisted men, departed Illinois on June 12, 1864, and moved into the State of Missouri where it performed guard duty until being mustered out of existence. Despite their relatively non-hazardous assignments, the regiment still lost 40 enlisted men to disease, accidents, etc. during its 100 days of service.

Spelling of the family surname appeared as Weemer in the 1840 census for Green, Indian Co. PA. A decade later in the same community it was noted as Wainer.  The name Wimer did not appear until 1860 when the family was residing in Texas, Dewitt Co., IL. That tallying also noted Henry as being a farmer. Although it appears likely that Azariah grew up as a farm boy, no particulars are known regarding his childhood, formative or teenaged years.

Initial documentary data pertaining to Azariah comes from 7/21/61 when he, a farmer residing in Clinton, Dewitt Co., IL, enlisted in the U.S. Army. Initially his enlistment was with a company organized by a Captain Brown which subsequently became Company "F" within the 41st Illinois Infantry. While in the service of his country Azariah's last name would appear as both Wimer and Wimur. As best as can be determined, at enlistment Private Wimer was 5'7" tall, had a light complexion and blue gray eyes.

All appears to have gone well private Wimer until late in 1861 when he contracted diarrhea. Despite the debilitating condition he remained on duty until around December 2nd when he was seriously injured in a camp accident.  By Azariah's telling the following occurred: " I was in (the) co(mpany) ordinance dept with (a) detail to take account of stock on hand.....(We were) rolling barrels on a plank to stack them. My helper fell and (the) weight of (a) barrel came on us. (I was) taken suddenly. I slipped and strained myself in saving the barrel from going on the man who was helping me.  (I'm) not sure what was in it (but it was) heavy.......I did not get (knocked) clear down. Somebody grabbed me, (but afterwards) I could not walk.  (I was not sure if (my) back was broken...... (I was) taken back to camp and remained there (not realizing how bad my injury was) until urination stopped and I (experienced) pain in my lower back....The next morning.... (I was taken to (the) reg(imental) hospital on a stretcher.....

Rejoining his company after an undisclosed period of time, private Wimer's physical problems continued into the early weeks of 1862 when he was again beset by (chronic) diarrhea and weak eyes.  It appears on this occasion he was hospitalized for three weeks....."until (the) day before (Union Gen. U.S.) Grant went up to Ft. Henry (TN). I went there with my co(mpany) but was not on duty (because) I was taken down again the very night we got to Ft. Henry.  I think this was February 6, 1862."  Azariah continues his tale: "I remained with my co(mpany) and after two or three days I made out with them to go to Ft. Donelson (TN).  I went into that fight, but was suffering all the time. As soon as the battle was over they sent me down the river to the hospital at Paducah again....When (I) got there the (doctor) gave me a 60 day furlough and I went home to Clinton, IL.  At the end of the 60 days I was still unable to go back so (the) furlough was extended."

It appears that in late May, 1862, after his marriage, Azariah rejoined his regiment which was then stationed at Corinth, MS. Company records show him as present for duty through July and August, but as of September 6th he was once again hospitalized, this time at Memphis, TN. His reported symptoms at the time appear to have been fever and back pains.  He remained hospitalized until 12/18/62 when, having been diagnosed with pulmonary tuberculosis he was granted a medical discharge from the army.

Released from the hospital on Christmas Day, 1862, Azariah travelled toward Clinton, Illinois where he and Leah would live with his brother George. Azariah’s brother Henry would later recall picking him up at the train depot in early January, 1863 and taking him by horse to George's home which was some twelve miles out in the country. By Henry's telling Azariah was almost helpless because of chronic diarrhea.  Azariah, and therefore, Leah would remain with George into the year 1866.  Azariah would continue to be plagued by diarrhea well into and, according to brother Henry, through 1864.

1864, however, must not have been a complete medical disaster for Azariah because on April 30th of that year he re-enlisted in the army. This enlistment was as a sergeant in a short-term "behind the lines" regiment. Most likely one motivation for re-enlisting was a hefty cash enrollment bonus or "bounty." This second period of service proved to be benign with company muster records reflecting only a period of detached service at Benton Barracks near St. Louis, MO and financial settlement of some clothing and equipment issues prior to final muster.

Leaving the military behind for the last time, Azariah returned to his family and his brother's home near Clinton where he continued to suffer from both diarrhea and constipation of the bowels. As previously noted, he remained there until sometime in 1866 when he and his family removed from Illinois to Minnesota where they settled in or near the Douglas County community of Holmes. It was the there the 1870 census found Azariah and family tending a farm which sounds somewhat unlikely as, reportedly in 1867, his diarrhea and constipation had caused the loss of the use of his legs.

The Wimer's apparently remained in Holmes until 1874 when, although remaining in Minnesota, they removed to the Washington County community of Aftan. There they would remain until 1880 when they resettled in or near Perham, in Otter Trail County. At that time and place the census noted Azariah as being employed as a mail carrier. Other Otter Trail County locations of residence during this period included Pear, Otter Trail and Battle Lake, one or more of which were apparently with brother George.

While there is a notation that Azariah and family remained with George until 1896, another source indicates they may have separated from him for a time as early as 1882. This speculation is based upon a survey from 1885 that found the family connected to the home of Leah’s brother, Aaron Moses, who also resided in Otter Trail County.

There is no census data from 1890 as most of it was destroyed in a fire. Likely, however, Azariah and Leah likely were still in Battle Lake as that was where a pension document placed them in 1894.

Concerning that pension notation, somewhere around the late 1880s Azariah petitioned the U.S.Government for a disability pension based on ailments and illnesses - likely chronic diarrhea, lung disease  and spinal injury stemming from the Paducah incident  which affected his head and neck – that he traced back to his terms of Civil War soldiering.  That the petition was granted is verified by the fact that on 6/25/90 he was granted a $6 per month stipend. By April, 1894, because of his ailments he was reportedly totally unable to earn a living.

As of May 10, 1899 the Wimers had departed Minnesota and were residing in Luluville, Miller County, GA.  When and why the move to that state was made is not known.  What is known is that by that time Leah was reportedly helplessly paralyzed from an undocumented cause or causes.   Based likely on his wife's condition Aariah sought an increase in his pension allowance, but such was rejected.

Documentation from 2/24/00 placed the Wimers as still living in Luluville, GA, but the census of 1900 - likely conducted around midyear - found  Azariah and Leah in Bowens Mill, Wilcox County, GA. Also, in the home at that time was the couples' eldest son, E.F. At some point during these Georgia years Azariah may have become the postmaster of the community of Fitzgerald.

Over the next several years Azariah's movements become even more murkily clouded than they have been up to that time. In late 1901 he was still in Luluville, GA, but by early October, 1902 he was reportedly in Danville, Meridian Co., IL, apparently residing in an old soldiers' home. Likely the move was prompted by the death of his wife which occurred sometime during the early 1900s.

By February, 1907 Azariah was back in Georgia residing in Ben Hill County. By April of 1908, however, he was apparently in Monroe, Snohomish County, Washington. The “why” for this move to the Pacific Northwest is not documented?

On 4/16/08 Azariah remarried. His second wife was Mary A. (nee Egan b. 3/5/53, England) Phillips.  This was Mary's fourth marriage. The couple would remain together until Azariah's sudden death on 12/19/15 from hemiplegia paralysis. Burial was in the Monroe I.O.O.F. Cemetery.

Following Azariah's passing Mary, who received some government monies of her own, attempted to claim at least a portion of her late husband's Civil War pension. That petition, however, was rejected on the grounds that she had married Azariah Wimer after 1905. Mary died on 2/10/20 and was buried beside Azariah.