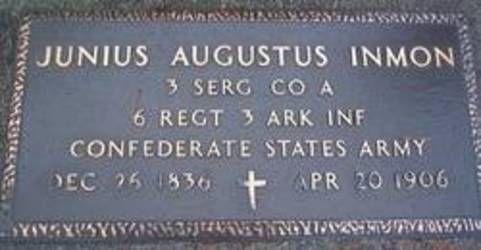 The 6th Arkansas Infantry was organized in Little Rock, AR during the spring of 1861. It would serve in western theater of the American Civil War (ACW).

Following its organization and reorganization the 6th was marched to Pocahontas, AR. There, measles broke out in the regimental camp causing a great many deaths. In September the regiment was transferred from state to Confederate service.

In September, 1861 the 6th moved into Missouri. From there, by boat, it was transported to Columbus, KY. The unit spent the winter of 1861/'62 in Cave City, Barren County, KY.

On April 6th and 7th, 1862 the 6th fought gallantly at the bloody battle of Shiloh/Pittsburgh Landing, TN. With other Confederate forces it then retreated To Tupelo, MS.

Mid-1863 found the 6th retreating from mid-Tennessee to the southern part of that state. There, it fought the battle of Chickamauga, GA (9/18 - 20).

In early 1865 the 6th moved into North Carolina. The ranks, again being greatly depleted, an entire brigade functioned as the regiment. The 6th surrendered on 4/26.

Julius Augustus Inman was born 12/26/1836. His place of birth was somewhere within the state of North Carolina.

Julius married in 1857. His bride was Sarah Jane (nee Strickland). Although birth years differ, herein we are accepting that Sarah Jane had been born 3/15/1836 in Atlanta Fulton County, GA. How, when and where she and Julius had met are unknowns. Also unknown are details of their wedding.

After marrying Julius and Sarah Jane settled in Arkansas. The U.S. Census for 1860 showed their address at that time to be LaGrange in the county of Lafayette. There, interestingly enough, Julius noted his occupation as being (slave) overseer.

Moving slightly ahead to 1861, prior to he and Sarah Jane's second child being born, Julius enlisted in the Confederate Army. Entering the ranks as a private soldier, likely because of his being somewhat older than his comrades and having been employed overseeing others, Private Inman rose to the rank of sergeant.

Without accessing Private/Sergeant Inman's military service records - if such exist - all we can say about his period of service is that he transferred from Co. "F" to Co. "A" likely because of regimental consolidation. Additionally, on 12/31/1864 Sergeant Inman was captured by Union forces in Landerdale County, AL. He was subsequently transferred to and held in a prisoner of war (p.o.w.) camp located within Camp Chase, Cleveland, OH.

Surmising that Sergeant Inman was released from prison at The War's end, he returned to his wife and young children in Arkansas. There, he continued farming while also growing his family.

Looking at the birth states of the Inman children, sometime after the birth of Sarah (1/1/1875) in Arkansas and before the birth of George (12/18/76) Julius moved his family from Arkansas to Texas. What had prompted the move and exactly when it occurred are unknowns.

Whatever had drawn the Inmans to Texas didn't capture their attention for very long because when Mary Ann "Mollie" was birthed in September, 1881 the family was in Washington Territory.

Again, what had drawn the Inman to the Pacific Northwest and when they had arrived here are unknowns. Another unknown, is exactly where they settled once here. A 3/10/1887 document noted the family address as Strick King County, WA.  By 1889, however, and through at least 1894 they were farming west of King County in Grays Harbor County.

By the dawn of the twentieth century the Inman family's farming address had once again changed.  In 1900 it was the Chehalis County community of Elma.

Julius Augustus Inman died on 4/20/1906 in Elma Chehalis County, WA. The cause of his passing is not known. He was/is buried in the Elma I.O.O.F. (Oddfellows) Cemetery.

After Julius passed Sarah Jane remained in Elma. She died there on 9/4/1920 and was/is buried with Julius in the I.O.O.F. Cemetery.