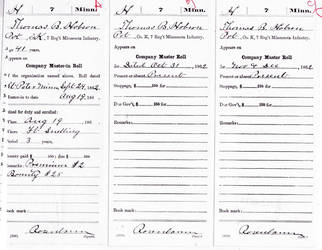 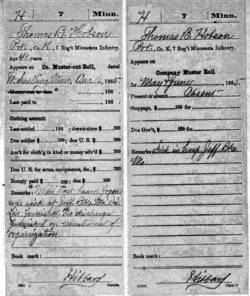 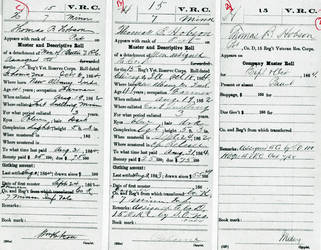 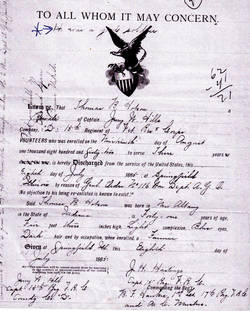 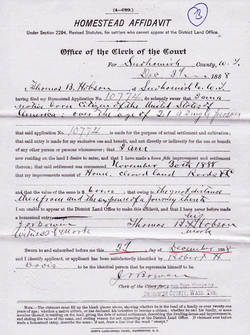 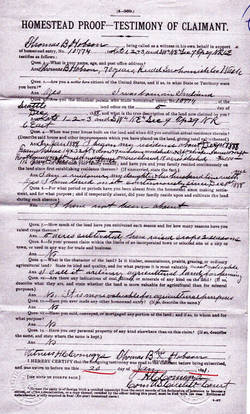 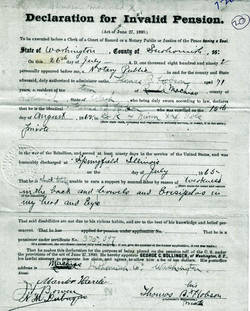 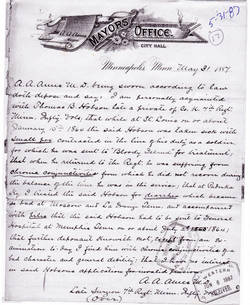 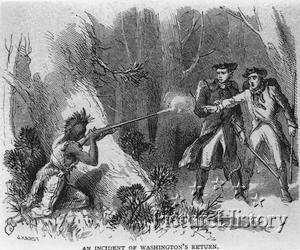 The 7th, a three-year "western theater" regiment, was formed during the summer of 1862 and mustered in by companies which, during the latter part of August and early September, were sent out in detachments to deal with the bloody Lakota Sioux uprising in Minnesota and the Dakota Territory.In this vein, in early September cos. "A", "B", "F" and "G" reported to Ft. Ridgley, MN where they joined the relief force heading for Birch Coolie, MN where other Federal forces were pinned down by hostiles.  Reaching that destination, men of the 7th helped care for the wounded and buried the dead.

Returning to the fort, the unit was joined by Co. "H". Shortly thereafter the regiment was engaged at Wood Lake, were next at Camp Release and then, Camp Sibley, where co. "A" joined them.   The regiment then moved to Camp Lincoln near Mankato, MN where they were joined by co. "K." From that location cos. "A", "B" and "E" were then sent to Mandelia while the rest of the unit was detailed to guard the Sioux prisoners taken during earlier operations. As a result of this assignment, the 7th was present at the execution of 38 of those prisoners convicted of massacring whites. Movements to Camp Pope, The Dakota (River) and Ft. Abercrombie followed.

On 9/9/62 the 7th returned to Ft. Snelling.  Finally, in early October the regiment departed the state to go fight Johnny Reb. Initially assigned to guard duty in St. Louis, MO, details were made from time to time out of that city.

In April, 1864 the regiment moved to Paducah, KY.  From there it travelled to Memphis, TN. It was in the campaign through Mississippi and saw action at Tupelo in that state. Following the Oxford Raid it participated in the pursuit of Confed. Gen. Price's troops as they retreated through Arkansas and Missouri. By late November the regiment had reached Nashville, TN where it participated in the battle of that place which resulted in a Union Victory.

Pursuing the retreating forces of Confed. Gen. J.B. Hood, the 7th reached Clifton, TN in early January, 1865. From there it moved to Eastport, MS, New Orleans, LA and Dauphin Island, AL where it participated in the siege and capture of the forts defending Mobile. Stationing in Alabama then preceded final muster and discharge

The Invalid Corps - later renamed the Veterans Reserve Corps - was formed within the Union army in April, 1863.  The purpose of the organization was to provide "light duty" assignments to partially disabled or otherwise infirm and/or former soldiers thereby freeing more able-bodied men for field service. The IC/VRC was divided in two battalions, the 1st containing units composed of men who had not lost a limb and were therefore ambulatory.  The second was composed of those who had lost a partial or all of a limb.  During its existence approximately sixty thousand men served in the IC/VRC.

The 15th VRC was a part of the 1st Battalion.  Information pertaining to its specific assignments is not available.

Based on available paperwork, Thomas B. Hobson was born circa 1820/'21 in New Albany County, Indiana.  Beyond this, nothing has been found on his parentage, family composition, child- hood, formative or teenaged years.

By 1857 the Hobson’s had quitted Indiana for Minnesota where they were residing in LA Sueur County. Children noted in the home at that time were Nancy and David (b. 1851). No additional information is available pertaining to that year and time period.

1860. The census for that decade found the farming Hobson’s still in LA Sueur, MN, but specified their address location as Cleveland.  Once again, the household makeup was Thomas, Mary, Nancy and David.

In August of 1862 Thomas enlisted in the U.S.Army.  At the age of forty one or forty two, he was far above the average age of 27.5 which fitted the common Civil War soldier. His vital statistics at the time were as follows: 5'3" in height, lightly complexioned, with dark hair and blue eyes.  His occupation was: farmer. For enlisting he received a "premium" of $2 and a bounty (bonus) of $100, $25 of which was paid up front.

Following Federal muster, company rolls for the remainder of 1862 show Private Hobson as present for duty.  The same continued into 1863 except for a 2/25 notation that he was "absent with leave."He returned to duty on 3/12/63 and was present the remainder of the calendar year with the September through December notation that he had "daily duty as assistant (company) cook."

1864 opened with Private Hobson continuing in the role of assistant company cook, but in late January while stationed at Schofield Barracks, in St. Louis, MO  the "wheels came off his  wagon.´ On 1/27 he was admitted to a U.S. General Hospital in St. Louis, MO with the dreaded disease, smallpox. In later years when Thomas was requesting a U.S. government disability pension based on ailments which traced back to his soldiering days, his former  company captain would write the following: " During the winter of '63//64 he (Private Hobson) was taken with smallpox in quarters where he was detailed as assistant cook...After he was sick in his bunk he was obliged to get up and go into barracks where Dr. Smith was attending sick call....he caught cold and was sent to the smallpox hospital on Bloody Island.  After his return from the hospital he was sick more or less and one of his troubles was disease of the eyes.  When we went into the field in Tennessee he was unable to perform that (field service) kind of duty and on the 2nd of July, 1864 was sent back from LaGrange to Memphis on account of inability to stand the fatigue and exposure of the march.  This was the last time he was with the company."

Another affidavit from May, 1887 reads as follows: I was acquainted with Hobson while at St. Louis, MO....On or about 1/15/64 he was taken sick with smallpox in the line of duty (and) was sent to Bloody Island for treatment...When he returned to the regiment he was suffering from chronic conjunctivitis from which he did not recover during the balance of time he was in the service... At Paducah, KY I treated him for diarrhea which became so (started) back at Moscow and LaGrange, TN and (was) compounded with piles, so he had to be sent to the general hospital in Memphis on or about 7/2/64.  He still has conjunctivitis.”

Relating to this same period a third comrade later wrote: “I was personally acquainted with Hobson since l860 and became well acquainted with him when (he) joined the 7th Minnesota Volunteers in August, 1862. I was company cook while at St. Peter and Mankato, Minnesota. In ‘62/’63 he was my bunkmate until, I think, he became sick in January, 1864 at St. Louis, MO. He was taken to the pest house at Bloody Island near the city and was informed he had smallpox… (after that) he was sickly and in poor health (with) inflamed eyes and diarrhea.”

On 8/10/64 Private Hobson was transferred from Overton U.S. Hospital in Memphis, TN to another at Jefferson Barracks near St. Louis, MO. The journey was made aboard the U.S. hospital ship D.A. January.Interestingly, admittance to the ship was accompanied by a notation regarding a gunshot wound to the right arm.  However, no additional documentation on this alleged wounding has been found. Other notations from the shipboard trip refer to chronic nephritis (kidney inflammation) and sciatic problems.

Private Hobson arrived in St. Louis on August, 17. Once there his condition did not improve, so on October 1st he was transferred into intensive care. While he may not have known it, as previously noted the private would not succumb to his illnesses, but would never again return to his combat unit.

While all the above was transpiring, Private Hobson was transferred from the 7th Minnesota to the Veterans' Reserve Corps. He would serve out the remainder of his military tenure in this arm of the U.S. Army.

With his service time behind him, it appears Thomas returned to his wife and family in Cleveland, Le Sueur County, MN.  It was there the census of 1870 found him farming with his wife and two children.   Five years later the Hobson’s were still in Minnesota, but by that time Nancy had left the fold.

The 1880 census placed the Hobson family still farming in Cleveland, MN.  In the household at the time - besides Thomas and Mary - was granddaughter Mary Wilson.  No additional information is available pertaining to that living arrangement.

Circa November, 1889 farmer Hobson departed Minnesota for the State of Washington. Why the move was made is not known.  Initial settlement was in or near the community of Snohomish located in the western Washington county of Snohomish. That same year noted that Thomas, apparently living alone, was still working as a farmer.

While no 1890 census data for Washington State survives due to being lost in a fire, documents from 1892 place Thomas in the community of Machias located just north of Snohomish in Snohomish County. Although the date of assignment and the dollar amount is not known, at some point the old soldier had been granted a disability pension.  This is known because in 1892 at the age of seventy one he sought an increase in his monthly stipend. At that time he claimed to be unable to work because of weakness of his back and bowels and erysipelas (inflammation of skin) of the head sand eyes. A document from April of the following year reads as follows: “(My) disability is weakness of the eyes contracted during the winter of '63/'64 from smallpox.... My weakness of the back was caused by a spell of intermittent fever in and during the month of June, 1864 and has ever since caused me much pain.  By spells during the years.....there have been weeks and even months I could not even rise from my bed without assistance......The weakness of my bowels was contracted about the same time as my back complaint - a few months later, in fact - and during all these years I have suffered from chronic diarrhea - sometimes a very aggravated form, and never well..... For the first few years after discharge I was able to perform some manual labor, sort of "half hand," but for the past seven or eight years I have been almost totally incapable of performing manual labor. It is not known if the requested pension increase was granted.

Although no specific documentation has been found to corroborate this, according to his headstone, former Civil War soldier Thomas B. Hobson died on October 28, 1896.  While his residence at the time of his passing is not known, his burial was in Woodlawn Cemetery located in Snohomish, Snohomish County, Washington.