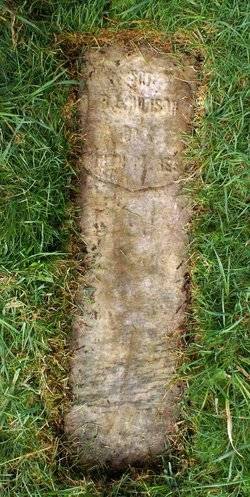 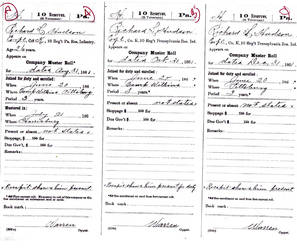 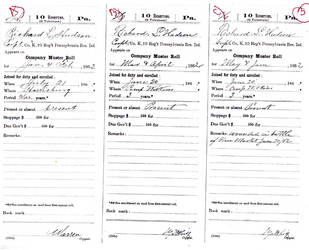 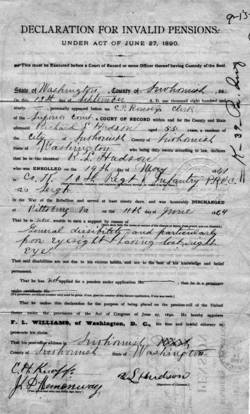 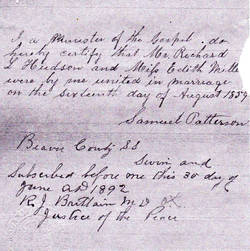 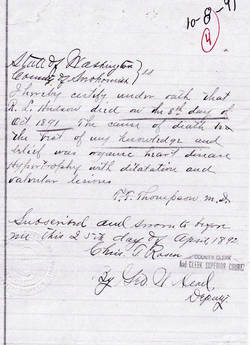 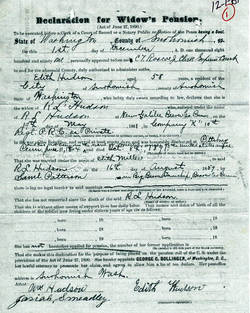 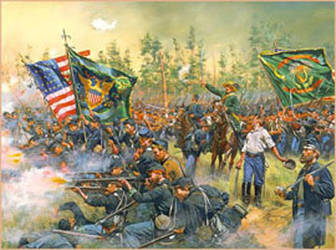 The 39th, a three-year western-theater regiment began its existence as a state unit designated the 10thPennsylvania Reserve Volunteer Infantry. Composed of men from the western portion of the state that rendezvoused at Camp Wilkins in Pittsburg, the organization left that city on 7/18/61 and travelled to the state capital at Harrisburg where it was mustered into U.S. service as the 39th. It then moved to Washington, D.C.  From there, on 8/1, the unit was sent to Tennallytown, VA and after a short service at Great Falls, VA fought at Dranesville in December and made its winter quarters at Langley.

In the spring of 1862 the 10th/39th was sent to Virginia's peninsula where it took part in the battles of Mechanicsville, Gaines Mill and Glendale/White Oak (Swamp).  The latter portion of that summer found it in action at Second Bull Run/Manassas, South Mountain, MD and Sharpsburg/Antietam in that latter state. The combat year was closed at Fredericksburg, VA. After Fredericksburg the 10th/39th was ordered to Washington City to recuperate.

July, 1863 the regiment fought at Gettysburg, PA and afterwards joined in the pursuit of the enemy as his forces retreated back into Virginia. The Army of the Potomac's Mine Run campaign concluded the fighting of '63

May, 1864 found the 10th/39th engaged in Union General U.S. Grant's Virginia Overland Campaign in the Wilderness, Spotsylvania, Totopotomoy and Bethesda Church.  Soon after the last action re-enlisted veterans and new recruits were transferred into the l90th and 191st Pennsylvania infantry regiments while the remainder of the old 10th/39th returned to Pittsburg for final muster.

One census entry indicates Richard L. Hudson was born in Pennsylvania in 1834.  A preponderance of documentation, however, points to the year being 1835. No birth date or month has been discovered.

In the spring of 1861 Richard answered his county's call to arms to put down a secessionist rebellion.  Enlistment was in the 10th Pennsylvania Reserve Infantry which shortly became the 39th Pennsylvania Infantry. Richard's entry-level rank was not private, but corporal. Muster rolls for company "K" show him as present for duty during the remainder of '61.

In mid-1862 the 10th/39th was in action during the late June (6/26, 6/27, 6/30) battle of New Market, VA in that state's Shenandoah Valley. During this conflict Richard was wounded. The nature of the wound is not documented.   Immediately thereafter, on 7/1 in White Oak, VA he was captured by the enemy and imprisoned in Richmond before being paroled on August 8th. He then reported to Camp Parole in Maryland and was returned to duty with the 10th/39th. After that return, sometime in September or October '62 he was promoted to the rank of sergeant. He would retain this rank throughout the remainder of his military tenure.

Available documental records reflect an interesting occurrence from the first part of October, 1862.  One Private Richard L. Hudson of Company "K" 10th/39th Infantry came before a court martial board for being absent from camp on 10/1/62 without authority at or near Sharpsburg, MD for the purpose of "marauding."   The process is of interest because there was no private Richard L. Hudson in company "K". There was, however, a Private Ralph E. Hudson. Although one source indicates Richard and Ralph enrolled on the same date, whether or not the two were somehow related is not known. Further, although no findings of the court marshall are available, the two mustered out on the same date in 1864. Finally, how this name confusion came about and what, if any, problems it posed for Sergeant Hudson is not documented.

Muster rolls for 1863 show Sergeant Hudson as always present. The same holds true for 1864 up to his final muster and discharge.  However, he must have had a furlough home at some point during one of those two years because son William came into this world during the latter year..............

The census for 1870 placed the Richard, Edith and family farming in Big Beaver, Big Beaver/Lawrence County, PA a decade later, however, found them farming in Township 10R in York County, Nebraska.

Although no census results are available for 1890 as they were mostly destroyed by fire, September 13th of that year place the Hudson’s in or near the community of Snohomish in Snohomish County, Washington.  When and why the move was made to there is not documented.

On 9/13/90 fifty five year old Richard applied to the U.S. Government for a disability pension based on ailments which he traced back to his years of Civil War soldiering. Basis of the application was his inability to earn a living because of "general debility", particularly loss of his right eye.

Former Civil War soldier Richard L. Hudson died on October 8, 1891. Cause of death was listed as heart disease. At death he was around 56 years of age.  Burial was in Snohomish's Woodlawn Cemetery.

Whether or not Richard ever received any government disability pension monies prior to his death is not known. However, immediately following his passing his widow applied for and was granted a widow's pension which commenced on 12/7/91 at a rate of $8 per month.

The next few years were, in some ways, apparently not easy for Edith. A June 6, 1893 affidavit (supporting an increase in her pension stipend) noted: "She has no real or mixed property whatsoever accept a few household goods and wearing apparel not exceeding $25 in value."  An additional affidavit presented on 6/14/95 noted that the unmarried widow was "living at home being supported by her sons."

The date and location of Edith's passing are not known.  Neither is her final resting place.