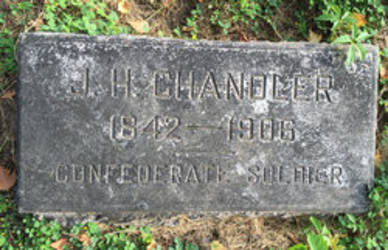 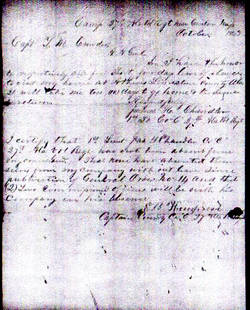 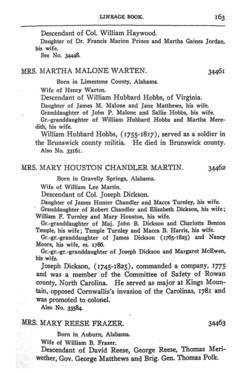 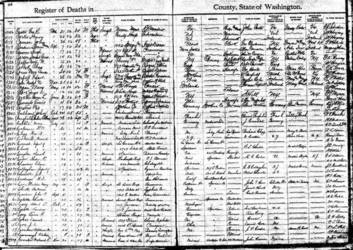 During the winter of 1861/1862 a number of independent companies from the Tennessee counties of Franklin, Lauderdale, Lawrence, Madison, Madison and Mobile converged on Ft. Heiman, TN. Out of this confluence was formed the 27th Alabama Infantry.

Once organized the 27th was ordered to Ft. Henry, TN. It helped defend that place, but removed from there to nearby Ft. Donelson before Ft. Henry surrendered to Union forces under command of Gen. U.S. Grant on 2/6/1862. When Ft. Donelson surrendered on 2/16/1862, so did the 26th Alabama.

At the time of the Donelson surrender a number of men in the 26th were hospitalized thereby avoiding capture. These men formed into two companies and affiliated themselves with the 33rd Mississippi Infantry. At the Battle of Perryville, KY (10/8/1862) this contingent of the 27th lost eight killed and twenty five wounded.

Exchanged on 9/4/1862, the main body of the 27th was ordered to Port Hudson, MS where it was joined by the other two companies. It remained in that vicinity throughout the winter of 1862/'63.

At Baker's Creek, MS (5/16/1863), the 27th was engaged, but retired from the field with their division. It was then in the trenches at Jackson, MS for ten days before they, with other Rebel forces retreated across the Pearl River. The winter of 1863/1864 was spent at Canton, MS.

Spring, 1864 found the 27th greatly reduced in numbers. As a result, a detachment was sent to Tuscumbia, MS to recruit.

About this same time, in April, 1864, another detachment of the 27th crossed the Tennessee River and captured about one hundred Federals. From there the regiment was sent to Dalton, GA and placed in a brigade with a number of other Alabama units.

From that time forward the 27th shared in the trials of the Confederacy's Army Of The Tennessee fighting with much loss through the Atlanta, GA Campaign. It also formed part of the last Confederate attack waves at Franklin (11/30) and Nashville, TN (12/15 - 16).

1865. When Union forces marched northward through the Carolinas, most members of the 27th were consolidated with three other Alabama regiments. The remaining members of the unit surrendered at Greensboro, NC on 4/9/1865.

James Hunter Chandler was born in December, 1842. No specific day/date has been found within available documentation. His place of birth was within the state of Alabama.

As best as can be determined, James was the younger of two sons born to Robert and Elizabeth. His older brother was John D. Chandler (b. 1839 AR).*

In April of 1861 civil war spread across America. In December of that year James enlisted in the Confederate States Army's 27th Alabama Infantry for what was to be one year. According to most sources, he was commissioned as a first lieutenant at the time of his enlistment. Some Confederate military records indicate, however, that he was appointed to the lieutenancy on 9/24/1863. In either case, James served in the 27th during the entire war and maintained the 1st Lieutenant rank that entire time.

Military life behind him, it appears James returned to civilian life in Lauderdale County, AL.  There, on 12/25/1868 he married.

James' bride was Macca Caroline Turnley.  Macca had been born 2/27/1847 in Lauderdale County, AL. Where, when and how the two had met are unknowns.

Settling in Lauderdale County, AL where, by 1870 James was employed as a "merchant", he and Macca produced twelve children. Ten of the twelve are identified. Of the twelve nine were reportedly living at the time of the 1910 U.S. Census.

As noted by the birth states of their children, James and Macca did not remain in Alabama throughout their child bearing/rearing years. Sometime between 3/20/1877 (Robert) and 11/2/1879 (James, Jr.) the family removed to Carroll County, TN. There, again, in 1880 James noted his occupation as being "clerk in store."

Circa 1897 the Chandlers moved from Tennessee to Spokane Spokane County, WA. What had prompted the move to the east side of Washington State and exactly when they arrived in the Inland Empire region of the Pacific Northwest are unknowns. Perhaps, however as we shall see, it was wife Macca having relatives there.

In Spokane James entered the (wholesale) grocery business with one of his wife's brothers. The firm, located at 207 Riverside Avenue was known as Turnley and Chandler.

James Hunter Chandler died at his Spokane - 524 Hatch Street - residence on 7/15/1906. Cause of the sixty three year old's death was a paralytic stroke. He was/is buried in Spokane's Greenwood Memorial Terrace cemetery.

* During the ACW John served in the 9th Alabama Infantry. It is unclear if he perished during the fighting at Gettysburg, PA (7/1 - 3/1863) or survived The War.