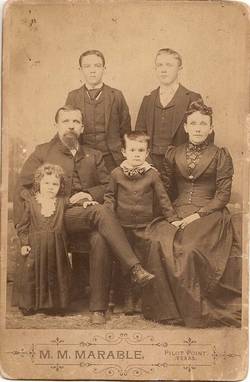 from Denise Ottoson:
At the age of 64 years J. K. Appleby passed away at 2 o'clock yesterday morning at his home on Samish Island. The cause of death was cancer of the throat which has troubled him for the past year. Apparently feeling very well, considering the nature of the affliction, Mr. Appleby read the daily papers Saturday night and discussed the news of the day with his family. During the evening he attended to the duties of the farm in the usual manner. Early Sunday morning he was attacked with a choking sensation. His condition became alarming and he grew from bad to worse until relieved by death at about 2 o'clock.

The deceased was born in Lafayette, Alabama, on August 29, 1844. At the age of 16 years, he enlisted in the Confederate army and served until the close of the war. In 1899 he came to Bellingham with his family where he resided up to the time of his death except for a few months' residence at Samish. He served six years as city clerk of the former city of Whatcom and two years as county clerk. He is survived by his widow, three sons, Dr. J. K. Appleby, of Seattle, Dr. Winston Appleby, of Anacortes, Hugh Appleby, of South Bend, Wash., and Mrs. Nellie S. Wetherell, of this city. Funeral arrangements have not been completed but will be arranged upon the arrival of Dr. Appleby, of Seattle, tonight. The deceased was a member of the Order of Yeomen and of the Knights of Honor.
(From The Morning Reveille, November 10, 1908)