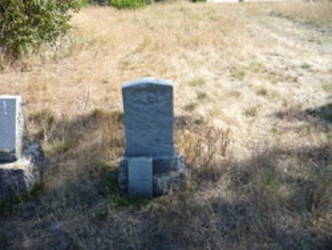 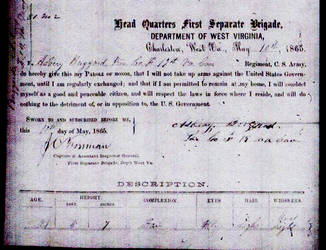 The 19th Virginia was a three year Confederate cavalry regiment. Its period of service was in the eastern theater of the American Civil War (ACW).

The 3rd - also known as the Moccasin Rangers - had been created in 1861 primarily with recruits from Calhoun County. Because they often attacked civilian targets the group was known as "bushwhackers." This organization, along with Joseph Kessler's Company D from Spencer Roane County, became the nucleus of the 19th.

The 19th - within which the Moccasin Rangers became Company "A", was organized and given legitimized CSA status in April, 1863 by Confed. Gen. John Imboden. However, off the three thousand, three hundred men encompassed within the new “cavalry” unit fewer than seven hundred owned horses!!

During the final two years of The Rebellion, the 19th served and fought with Confed. Gen. Robert E. Lee's Army of Northern Virginia in southwest Virginia and that state's Shenandoah Valley. Following the surrender of that army on 4/9/1865 the unit was disbanded.

Joseph "James" Asbury Buzzard was born on 3/18/1844. His place of birth was within Powhatan County, VA.

Henry and Martha produced at least three children before the latter disappears from the family history either because of death or some other, undocumented reason. ** Of the three Buzzard children James was the eldest and the only male. His younger siblings were Susan Buzzard (b. 1847 VA) and Sarah J. Buzzard (b. 1848 VA).

In 1863 James enlisted in the 19th CSA cavalry. His company, "F" had previously seen service as Capt. William L. McNeel's company within the third regiment, Virginia State Line (Cavalry). Here, it should be noted that it is not known if Private Buzzard had previously ridden and fought with the company when it was an irregular/guerilla unit.

As for Private Buzzard's service in the 19th, all that is documented is that for an unexplained period of time in January/February, 1864 he was absent without leave (AWOL). Later, though, he was shown on the muster roll of Co. "F" as once again being present for duty.

Finally, in April, 1865 Private Buzzard was captured by Federal forces. The War ended, he was paroled on 4/10 at Charleston, WVA.

At the time of his parole we catch a glimpse of Private James Asbury Buzzard the physical man. At twenty one years of age he was 5'7" tall, had a fair complexion, fair hair and blue eyes. In terms of facial hair the parole document noted he had a "slight mustache."

With military life behind him it appears James returned to his old home territory which was - as has been noted - now West Virginia. There, during 1869 in Pocahontas County, he married.

The new Mrs. Buzzard was Isabella/Isabelle "Isabel" J. Burnside. She had been born in Virginia during 1839.

Noting birth states of the girls, the Buzzards farmed for a time in West Virginia before trading that state for Missouri. What had drawn them there and in or near which community or communities hey may have resided are unknowns.

Whatever the Buzzard's reason or reasons to move to Missouri may have been they did not dally there for long. By sometime in 1878 they had moved to the far west coast of the county. In California we know they were residents of Yolo County, but beyond that have no additional information.

Then, we gain an insight into what had drawn James from Missouri westward to California and, by 1880 northward to Spokane County on the far eastern edge of Washington Territory (WT): It was land ....homestead farm land.

James died on 9/12/1883 on his Spokane County homestead. Dead at thirty eight years of age, he was/is buried in the Riggs Cemetery located in nearby Rosalia Whitman County, WT.

And the homestead? In the sad wake of her young husband's passing, on 5/15/1884 Isabel received the patent (deed) to the parcel.

**Henry remarried in 1868. This union gave James two half- brothers and two half- sisters.