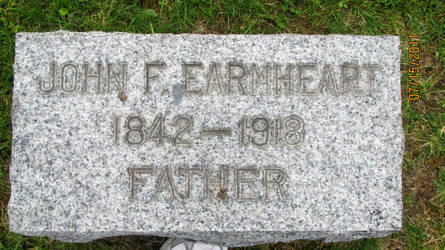 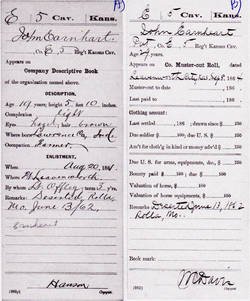 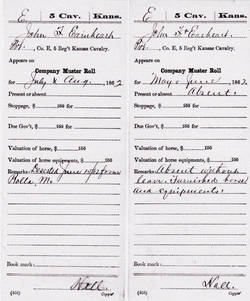 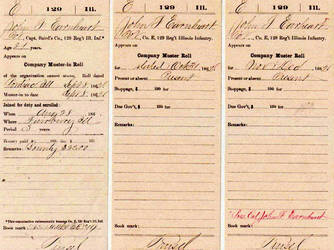 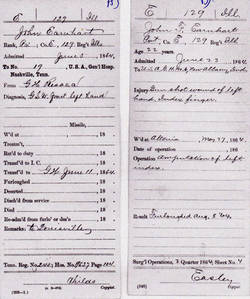 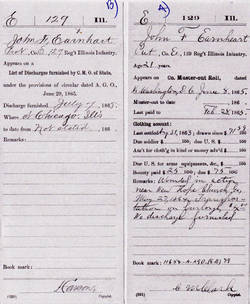 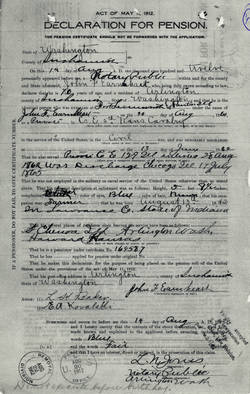 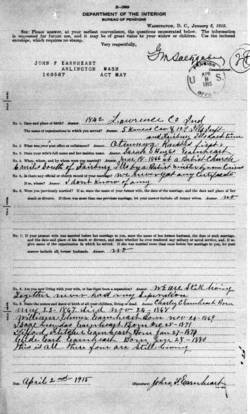 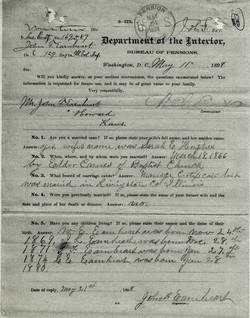 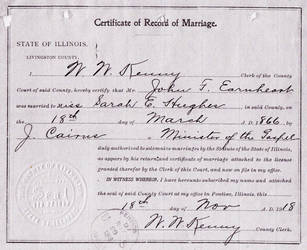 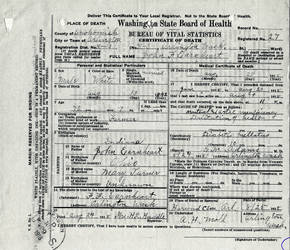 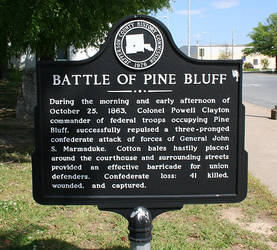 This three-year, eastern-theater regiment actually saw considerable active service prior to its official muster date. Companies "A" and "F" formed part of an expedition to Harrisonville, MO  and upon returning to Kansas escorted a supply train to Fort Scott were companies "B", "C' and "E" and two infantry companies joined them.

The 5th then took part in a number of skirmishes around Ft. Scott during which a few men were wounded.  In a gallant charge at Morristown, MO in mid-September the unit's Colonel fell pierced by nine bullets.  Later the regiment was engaged with Confed. Gen. Price's forces at Osceola and West Point, Mo. It then returned to Kansas and went into winter quarters.

In early 1862 the 5th received a new colonel who significantly improved regimental discipline and drill. Much of this improvement was attained in April and May while stationed at Springfield, MO.

The regiment was next ordered to join the Army of the Southwest near Helena, Ark.  A detachment of 150 men escorting the regimental wagon train engaged the enemy with loss at Salem, Ark. After the crossing of the Black River near Jacksonport it received warm commendation for bringing the train safely through.

The unit remained in the vicinity of Helena, Ark until August, 1863 there being engaged in numerous expeditions and skirmishing almost daily with Rebel forces. At the battle of that city on 7/4/63 the 5th fought from sunrise until 2 pm against Confederate cavalry, finally routing it was great loss.  In mid-August the regiment started for Little Rock as part of U.S. Gen. Steele's expedition. During this movement it was engaged at Brownsville and Little Rock.

On September 14th the 5th was ordered to Pine Bluff, Ark. It then fought a sharp engagement with Confed. Gen. Marmaduke's cavalry at Tulip in early October and gained a great victory.  A force of 600 5th men then successfully defended Pine Bluff against an attack by 3000 Rebel troopers and 2 pieces of artillery.

January, 1864. The regiment was engaged at Branchville with forces under Confed. Gen. Shelby.  It then skirmished at Mt. Elba and in late March participated in engagements with the enemy at Monticello, Long View and, again, at Mt. Elba. These actions resulted in driving the Confederates from the country between the Mississippi and Saline rivers plus the capture of several hundred prisoners.

After Union Gen. Banks' disastrous Red River Expedition which stretched from 3/3 to 5/22/64 the Federals, including the 5th were forced to retreat and abandon the region south of the Arkansas River.  To add insult to injury, in April, 1864 a portion of the 5th was involved in the Union disaster at Marks' Hills during which the escorted Union wagon train was captured.

During its last important combat engagement the 5th faced a brigade of Texas cavalry losing 1 killed 4 wounded and 1 missing. The remainder of the regiment’s active service it was occupied in scouting and the usual arduous duties assigned to the cavalry.

The 129th, a three year Illinois western theater regiment had five companies raised in Livingston County, four from Scott County and one from Rock Island County.  It left the state on 9/22/62 and reported to Louisville, KY. From the middle of December of that year until the first of June, 1863 it was assigned to guard the railroad running from Bowling Green, KY to Gallatin, TN. It's designation at this time was noted as "mounted infantry." During this period it had frequent collisions with the enemy, repelling their attacks on the rail line.

During the Atlanta Campaign which spanned May to September ‘64 it participated in all principal battles, marched to the sea and northward through the Carolinas. In the latter movement the unit saw action at Averasboro and Bentonville, both in North Carolina.  The war ended, the regiment moved to Washington, D.C. where it participated in the Grand Review. From D.C. it travelled to Chicago where it received its final pay and discharge orders.

On August 20, 1861 at Fort Leavenworth, Kansas, nineteen year old John F. Earnheart enlisted in Captain Hunt's company of the 5th Kansas cavalry. This unit subsequently became company "E" of the 5th. His period of enlistment was three years. While in the military his surname, in addition to Earnheart, would appear as Earnhart and even Ernhart, while later government documents would reflect Erhite or Ernhite,

Private Earnheart, at the time of enlistment, listed his post office address as the community of Ottumwa, Kansas.  His vital statistics were as follows: 5'10" in height, hazel eyes, light complexion and brown hair.  His occupation at enlistment was noted as "farmer."  Whether or not John had a farm of his own or was working for his parents or some other party, is not known.

The company muster roll for 10/31/61 noted Private Earnheart as being present with the valuation of his horse being $120. The value of his horse equipment was $5. Rolls listed him as being present for duty from that date until the end of the year. The same was true for the first four months of 1862.

What Private Earnheart's present/absent status was for May, 1862 is not noted.  What is noted, however, is that on June 13th or 14th of that year he deserted from his command.  No details are available pertaining to what prompted the desertion.

Interestingly, slightly over two months after his desertion, John, then residing in Illinois re-enlisted in the army, this time in the U.S. infantry. The new enlistment appears to have been under his true name, so how that was accomplished in light of the earlier aborted period service is not known. This new unit was Captain Baird's company of the 129th Illinois infantry. Baird's unit would subsequently become company "E" of the 129th. For enlisting infantry Private Earnheart received an enlistment bonus or "bounty." That financial incentive was $100, $25 of which was paid up front with the balance to be received later. Records would show him present for duty during the remainder of 1862 and the entirety of 1863.

In 1864 Private Earnheart's luck began to change, but not for the better.  Firstly, on March 1st near Tullahoma, TN, after being exposed to rain and cold he contracted a violent cold which resulted in both rheumatism and catarrh - the latter likely being a sinus infection. Although treated in the regimental hospital and returned to duty, he would continue to suffer from the effects of this illness for decades to come.

On the heels of the above illness, on May 27th, while on a skirmish line near New Hope Church, Georgia Private Earnheart -  the location would also be noted as Dallas, GA, Burnt Hickory, GA or Allatoona, GA - received a gunshot (minnie ball) wound to the index finger of his left hand. Admitted to #19 U.S.A. General hospital in Nashville, TN, the wound resulted in the amputation of that finger to the "second joint."

While available documentation is somewhat unclear, in the wake of the amputation, Private Earneart may have been transferred to another Nashville hospital from whence he was sent to a hospital in Louisville, KY. From there it appears he was loaded on the hospital ship "Ohio" for transport to another medical facility located in New Albany, Indiana. From there, on August 8, 1864 he was furloughed and provided transportation - for which he would later have to pay - to Reynolds, Indiana. The significance of the latter location is not known.  Returned to duty from furlough on September 12, 1864, on November 3rd of the same year he was again furloughed, this time for a period of seventeen days.

1865. The final months of four years of bloody civil war.  Once again, available documentation is murky pertaining to Private Earnheart's duty status. It appears he may have been returned to New Albany, Indiana a second time, and from there sent to Louisville, KY barracks before being returned to duty on April 10th. Where that duty station was is not documented. Further, what his duty status was and where he was at the time of his being mustered out of the military is not known.  What is known, however, is that the day following his separation from the military, because of his wounding, he commenced receiving a $2 per month U.S. Government disability pension stipend.

After the War John returned to Illinois. However, exactly where he settled is not known. However, there is some evidence to indicate that settlement was in or near the community of Chenoa in McClean County. This community is located near the McClean/Livingston county border.  Whatever his Illinois address, the former U.S. Army private returned to the life of a farmer.

On March 18, 1866 in a Baptist church located in South Fairbury, Livingston County, Illinois John Earnheart married.  His bride was Sarah E. Hughes (b. 1843 PA). The couples' first child, Charley E. was born on March 23rd of the following year. Tragically, Charley would survive only until November 23rd of 1868.

As noted by the locations of their children’s' births, the Earnhearts remained within Illinois for over a decade.  The census for 1870 placed the family in Edwards Point, Livingston County. 1880 found the family also in Livingston County, but this time in Indian Grove. Both tallies noted John as being a farmer.

By 1882 the Earnhearts had quitted Illinois for the community of Howard, located in Elk County, Kansas. Why the move was made is not documented. It appears, however that John continued to pursue a life of farming in the state where he had first entered the military during the late Civil War.

As the years following his war wounding passed, John sought to increase his monthly disability pension from the $2 originally granted.  It appears, however, that it was not until 1889 that an increase was awarded.  And, then, it was from $2 to $4. By 1898, however, it may have climbed to $14 per month. What it was at the time of his passing is not documented.

As most of the 1890 U.S. Census was destroyed by fire, there is no indication available as to where the Earnhearts were domiciled that year.  In 1900, however, they continued to farm in Kansas, but were then targeted in or near the Elk County community of Union.

1900. The dawn of a new century and another census tally. By this time the Earnhearts had departed the fields of Kansas to relocate in the Washington State Snohomish County community of Arlington.  Located in the Puget Sound region the western part of that state, in Arlington John was once again farming.  What had drawn them here we do not know.

John died in Arlington on August 20, 1918 at the age of 76.0 years. He was treated by a physician from June of that year until the day before his death. Cause of that death was noted as "Nustral and arctic insufficiency and dilatation of heart. Contributing: diabetic Mellitus.  To the end John was a farmer.  He was buried in Arlington's Harwood Cemetery.

Sarah remained in Arlington for the remainder of her years.  In 1920 the census listed her as the head of a household which she shared with sons William and Isaac.  A decade later William was listed as her household head.  She died on May 22nd of that same year and was buried beside John.