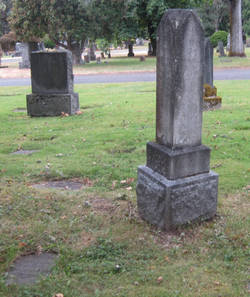 Di ed of La Grippe. She had lived in Tacoma 19 years.

John Hill was born in Larne, County Antrim, Northern Ireland. He was delivering a load of cargo from Portland ME to New Orleans in 1861. While onshore, he was pressed into service in the Confederate Navy. When the Ironclad Merrimac was built, he was assigned to that vessel, and participated in the "Battle of the Ironclads" in 1861. After the battle, the Merrimac was blown up rather than be captured by the Union. John Hill lit the match that set off the powder magazine in the vessel, reducing it to scrap iron. He lived in Tacoma WA the last 27 years of his life, and for the last 5 of those years was the Truant Officer for the Tacoma School District. He said in an interview late in that career that 90 percent of the children that were in his caseload suffered from neglect by their parents. John Hill was a true hero for "The Cause", and did his duty. He was a British subject all his life, didn't want to fight in the Confederate Army or in the Civil War being fought in a country he wasn't involved with, but once resigned to his fate, he did his job the best way he could. All patriots should salute John Hill as a man of honor and integrity.

Suggested edit: John Hill was born in Larne, County Antrim, Northern Ireland. This is borne out in census records and marriage certificate to Mary Rea. This was also told to me by his granddaughter, my mother, who grew up in the house he built on A Street in Tacoma. Northern Ireland is part of the United Kingdom, but it is not England. He left Larne at the age of 14 to go to sea.
Contributor: MaggieBlanche (47800426)