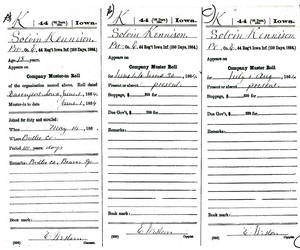 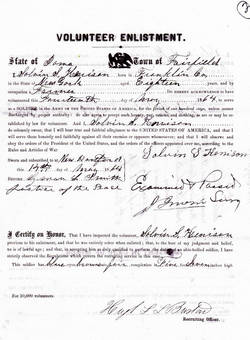 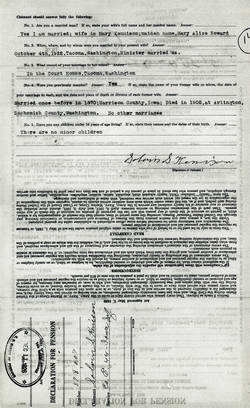 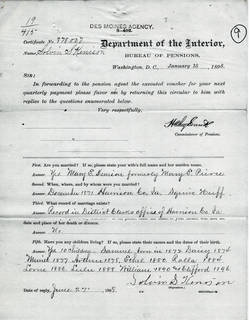 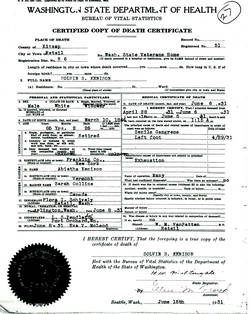 Overland-Richmond VA Wilderness Campaign May 5 to 6 1864

During the early months of 1864, Union General U.S. Grant began amassing troops for his Overland Campaign which would head south into Virginia in early May and, a year later would bring an end to four years of bloody Civil War.  To build his armies, Grant called forth troops from rear echelon assignments and placed them into the field.  In order to fill the guard duty and garrison positions abandoned by the departing troops the U.S. War Department sent out a request for thousands of "short term" soldiers to fill newly formed, primarily non-combat, regiments.  The 44th Iowa one such regiment.

The 44th, a western-theater regiment was one of five “100-Day” units called forth from Iowa.  During its period of existence the unit was assigned to garrisoning posts and guarding railways in Tennessee. Even though the assignments were mostly non-combat, the regiment, during its short tenure, did suffer casualties.

*NOTE: Mr. Kenison served in the U.S. Army under the name Solvin S. Kenison. However, according to family information and U.S. Census data, his birth name was Sylvester Solvin Kenison. For our purposes herein we will utilize the Solvin S. identification. Here, too, it will be noted that the family surname also appeared as Kennison, both in census takings and while Solvin was in the service. Herein we will adhere to the Kenison spelling.

The U.S. census for 1850 found Solvin's family residing in Ellensburg, Clinton County, NY. By that time a third child: George E. (b. 1848 NY) was also in the household.

On May 15, 1864 Solvin and his younger brother, George, enlisted in the U.S. Army for a period of 100 days. Informational sources differ as to where those enlistments occurred. Some say Fairfield, Iowa, while another refers to Clarksville and a third, New Hartford in Butler County. While the exact location is not known, Solvin's post office at enlistment was noted as being New Hartford.

The Kenison brother’s enlistment appears to have been with a unit known as the Butler County Braves. That organization would subsequently become company "E" of the 44th Iowa infantry. At enlistment/muster Solvin's vital statistics were noted as follows: Age = 18.2 yrs; Height = 5'7"; Complexion = light; Eyes = blue and Hair = brown. The young private's occupation was noted as "farmer."

According to available military records the Kenison brother’s period of military service was uneventful. As for Solvin, at final muster the only notation pertaining to Solvin was "Amounts for clothing in kind or advances: $23.27."

As noted by the locations where the Kenison children were born, sometime between 1874 and 1876 - depending on whether or not the birth year of Sarah is accepted as 1874 or 1875 - the Kenison family removed from Iowa to Nebraska. As with the moving date, exactly why the move was made is not documented. Where the family initially may have settled is not known, but as of the census of 1880 they were in Seward County, Nebraska with S.S. listed as being a "laborer."

By May 25, 1889, while in Nebraska, Solvin had begun the paperwork process to obtain a U.S. government disability pension based on an ailment which he claimed traced back to his days of Civil War soldering. That ailment was described as "brain fever" for which he was reportedly treated in the regimental hospital located in La Grange, TN in July, 1864 and which by the late 1880s had resulted in partial loss of sight in both eyes. Such a pension stipend was ultimately granted and, by the time of the old soldier's death amounted to a payment of $75 per month.

1900. A new century, a new decade and a new census tally. The latter for that year placed Solvin, Mary and family - Rollo, Llulu/Lula, William and Clifford - in Kearney, Buffalo County, Nebraska with Solvin's occupation listed as "teamster." Interestingly, Mary is presented as having birthed ten children with ten living..............

Five years after the 1900 census the Kenisons were no longer in Nebraska, but residing in the Puget Sound region of Washington State. As with other aspects of this chronicle, when and why the move to the Pacific Northwest was made is not noted in available documentation. As of that year the family was domiciled in Arlington located in Snohomish County.  It was there during that same year that Mary died.

After his wife's passing Solvin remained in the Arlington/Snohomish County area.  The Census for 1910 found him there in the now long-gone community of Armstrong which was likely near Lake Armstrong. In Armstrong he was residing with and apparently working for a Kentucky born farmer named Andrew Irwin. How long this arrangement lasted is not known, but by mid-1913 he was living in the soldiers' home located in Orting, Pierce County, Washington. He would remain there until at least 1930. While there, it was noted that as of November 1st of 1925 he required the regular assistance of another individual as he was blind in one eye and had very bad sight in the other.  Also, he suffered from rheumatism and the "disabilities of old age."

On 10/24/22, while a resident of the Orting soldiers' home, Solvin remarried. His new bride was Mary Alice Blowers (nee Howard b. 3/15/40).  The union would not prove to be a good one as evidenced by this 2/1/27 letter written by wife Mary to the U.S. pension bureau.  “My husband Solvin S. Kenison has left me. He says he going to apply for a divorce from me......(He will) be 81 years old 3/10/27. I will be 73 years old March 15, 1927. I want half of his pension for my support.  I did everything for him that I could do.  He was as ugly as he could be to me.  He called me every noxious vile name he could lay his tongue to, even calling me a b-a-s-t-a-r-d and a b-i-t-c-h and (that) I was the fart child of the family....My parents had never been separated.  My parents were respectable people.  They married in England, but I was born in the U.S.A. My husband would shake his fist in my face and swear at and say that if i would no c-o-h-a-b-i-t-a-t-e with him he would leave me.  The truth was he couldn't. I did all I could for him and then I refused to be wearied so much.  I am old and not able to earn my living.....He took all his things away."  For whatever reason, the pension request was abandoned in January of 1928. Records are unclear as to whether the couple actually divorced and the fate of Mary Alice is unknown.

In March of 1931 Solvin was hospitalized in Seattle, King County, Washington with a circulatory problem in his left foot and leg. From there he appears to have been transferred to another hospital in Bremerton, Kitsap County, Washington where he remained until late April. Then, with no improvement being shown in his condition he was moved the state soldiers' home in Retsil, Kitsap County, Washington. There he died on June 6, 1931. The cause of death was listed as "senile gangrene of the left foot" and "exhaustion". Burial was two days later beside his first wife, Mary E, in the Arlington, Washington cemetery.