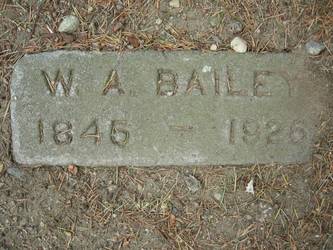 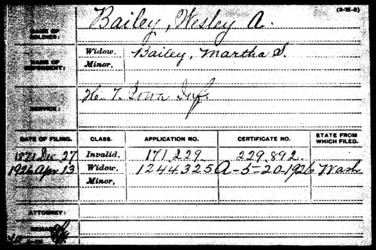 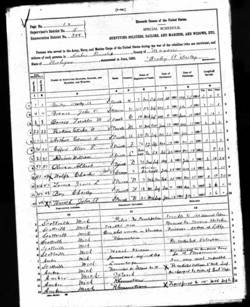 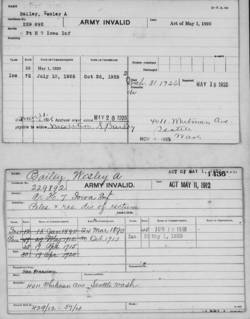 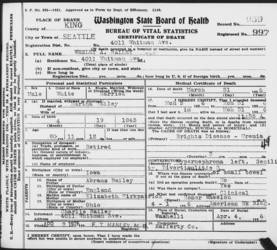 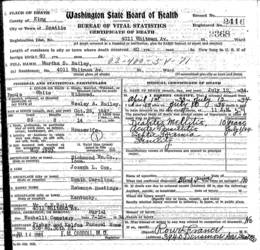 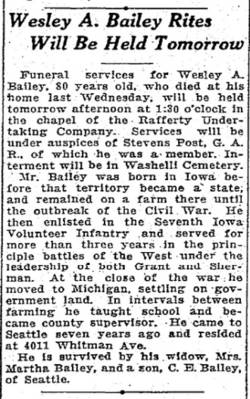 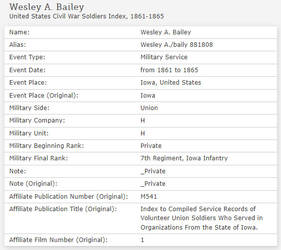 The 7th Iowa was a three year infantry regiment. Its term of service was spent in the western theater of the American Civil War (ACW).

Leaving the state only a matter of days after the Federal muster of 8/21861 the unit proceeded to Jefferson Barracks located near St. Louis, MO. There, it was armed.

From St. Louis the 7th proceeded to Cairo, IL, and then moved into Kentucky. Moving back into Missouri it saw its first action during the battle of Belmont (11/7/1861) where it and other Union troops were surrounded by the enemy. The regiment subsequently earned the praise of Union Gen. U.S. Grant for cutting a way to freedom through the Rebel lines.

In January, 1863 the 7th embarked southward on steamers and subsequently took part in the Federal actions against Tennessee Forts Henry (2/6) and Donelson (2/11 - 17). From there it moved to Pittsburg Landing, TN where it fought in the battle of Shiloh (2/6- 7).

The 7th next marched into Mississippi. At Corinth (10/3 & 4) it lost nearly one third of its members engaged. The summer was spent scouting, foraging and guarding trains in Tennessee. In November it went into winter quarters at Pulaski.

Returning to the field in 2/1864 the7th regiment joined the campaign to capture Atlanta, GA. After the fall of that city (7/22) it marched to Savanah with the forces of Union Gen. W.T. Sherman.

The dawning of 1865 found the 7th marching northward through the Carolinas. It reached Goldsboro, NC on 3/24.

The War ended, the 7th participated in the Grand Review in Washington City. It then moved to Louisville, KY where it was mustered out of service and into history.

During their time together Wesley and Martha produced four children. To date, however, only three of their names have been found. The three were: Charles "Charlie" Bailey (b. 1865 or '66 IA), Lucy L. Bailey (1868 IA) and Edward Bailey (b. 1873 MI). At the dawning of the twentieth century only two of the four remained living.

After marrying, Wesley and Martha settled into farming in Iowa. However, sometime after the birth of Lucy in 1868, but before the U.S. Census of 1870 the Bailey family quitted Iowa and took up farming in Amber Mason County, MI. A decade later, in 1880 they were still in Mason County, MI but apparently had relocated to the community of Custer.

Providing some confusion in the matter of where the Baileys resided and when, is the ACW Veterans' census of 6/1890. According that tally, in 1890 the Bailey's were still living in Amber, MI.

Whatever may have been the Bailey family's pattern of moves, by the time of the U.S. Census taking of 1900 they were living in Seattle King County, WA.  What had drawn them to the Puget Sound region of the Pacific Northwest and when they had arrived here remain unknowns. In Seattle Wesley was employed by the King County Assessor's office, likely as a clerk.

Retired, Wesley Bailey died in Seattle on 3/31/1926. The location of his passing was apparently the family home located at 4011 Whitman.

Cause of Wesley's death was Bright’s (kidney) disease with diverticulitis of the small intestine contributing. His passing came at the age of eighty years, eleven months and twelve days.

The old soldier was/is buried in the Evergreen-Washelli Cemetery on 4/4/1926. In 1926 that facility was located north of the Seattle city limits. Now, however, it is part of Seattle.

On 12/27/1871 Wesley had petitioned the U.S. Government for a disability pension based on ailments or conditions which he traced back to his days of Civil War soldiering. The request granted, he began receiving a monthly financial stipend which, by the time of his death, amounted to fifty dollars per month.

Almost immediately following Wesley's passing Martha requested the Government continue paying her at least a portion of her late husband's paycheck. That request was granted, but without accessing her widow's pension file the financial details of her stipend remain unknown.

Martha died in Seattle on 7/12/1934 at the Whitman Street home which, by that time, she was sharing with son Charles and his wife. The cause of her passing was complications of old age. She was/is buried in Evergreen Washelli with Wesley.